We are first going to focus on parametric regression, whereby we fit a model to data using a set of parameters.

Let's start with a simple example. Suppose we want to build a model that can predict how much it will rain today based on changes in barometric pressure.

Let's look at the following scatterplot, where each point maps a change in barometric pressure on the x-axis to the corresponding amount of rainfall on the y-axis. 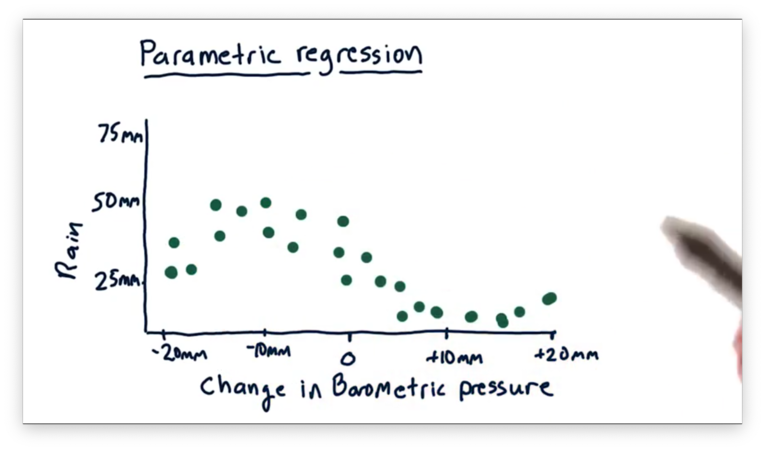 We can see a general trend here, and indeed it follows our intuition: as barometric pressure increases, rainfall tends to decrease.

We want to create a model, based on this data, that we can query for any change in barometric pressure - not just the examples we've already seen - and get a resulting prediction for rainfall.

The classic solution to this problem is to fit a line to the data, and we've plotted one such line below. 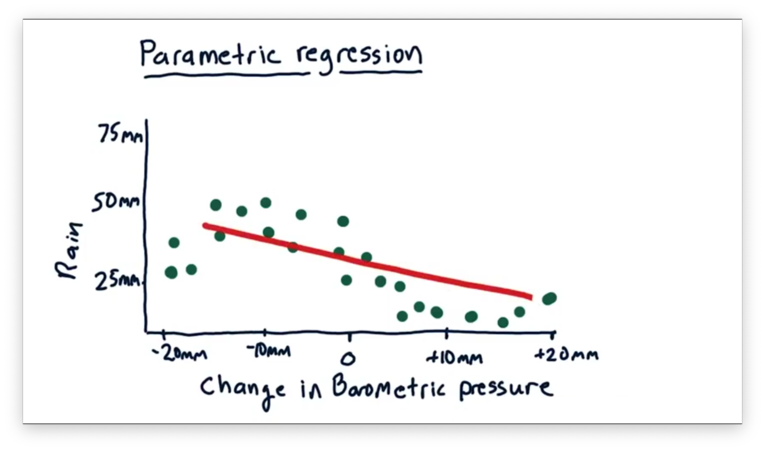 This approach is called linear regression, and the resulting model can be described using the equation for a line: y=mx+b. In this model, x is the observed change in barometric pressure, y is the predicted amount of rainfall, and m and b are the parameters that we must learn.

Once we learn m and b, we can query our model for any x and get a corresponding y. 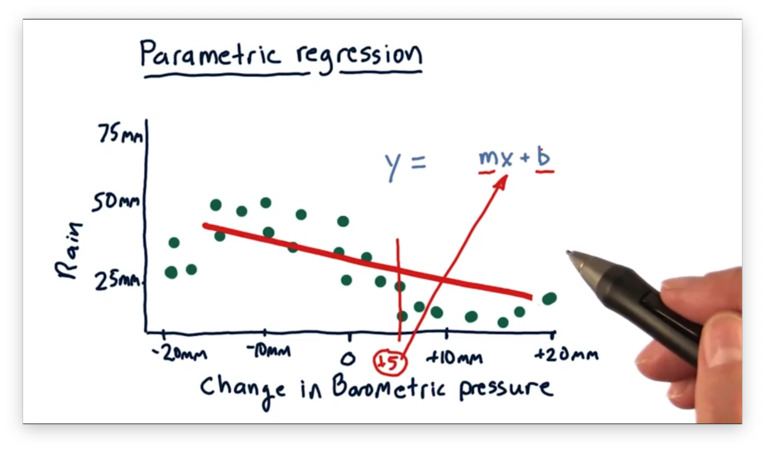 This model is decent, but it doesn't accurately track the behavior of the data. As we can see, the data "curves" up and then back down, and a linear model can't capture this type of movement.

So, we can generate a more complex model. Instead of fitting a line, we can fit a polynomial: y=m2​x2+mx+b. With this model, we have to learn three parameters, whereas we only had to learn two with the simpler linear model. 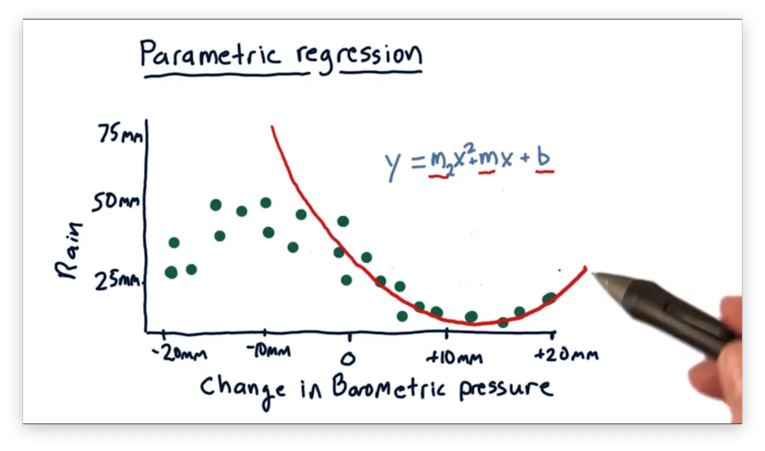 Notice that this polynomial model fits the data much better than the linear model for x>0. However, the model fits the data for x<0 pretty poorly. As you might imagine, we could add an x3 term to our model to help better fit that portion of the data.

After we learn the parameters for a model, we can throw away the training data and retain only the parameters that describe the model. For a polynomial of order d, we only need to store d+1 values, which makes these regression models very space-efficient.

Instead of using a parametric approach, we can use an instance-based regression approach like KNN. In KNN, we retain all of our data and utilize it when we make a query.

Let's recall our scatterplot from before, which demonstrates a relationship between change in barometric pressure and rainfall.

Suppose we want to query our model to predict how much rainfall we should expect for a change in barometric pressure of -5mm. 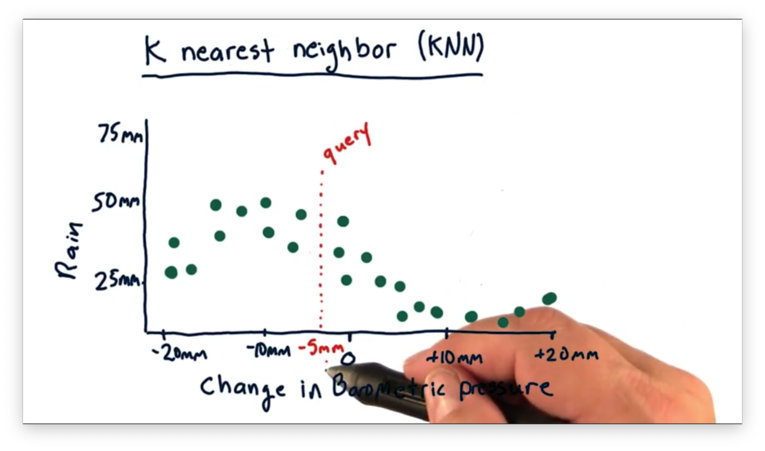 With KNN, we find the K nearest historical data points to our query and use them to estimate the prediction. In this case, K=3. 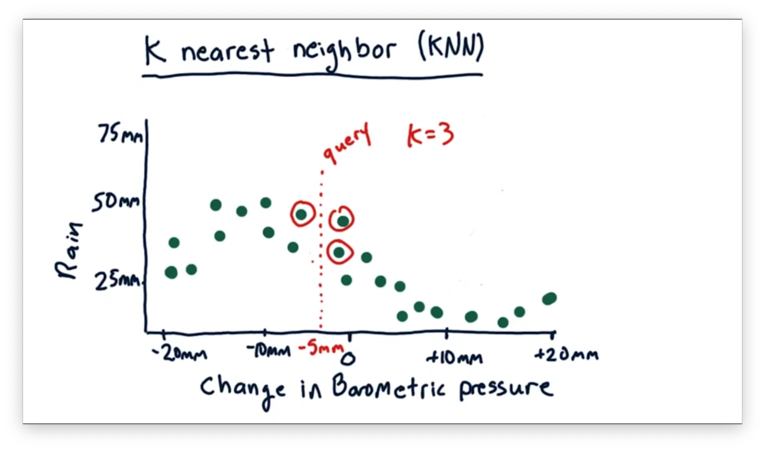 How to Predict Quiz

We've identified that, in KNN, for a particular query Q, we want to utilize the K nearest data points to Q to come up with a prediction. What should we do with those neighboring data points to find that prediction? 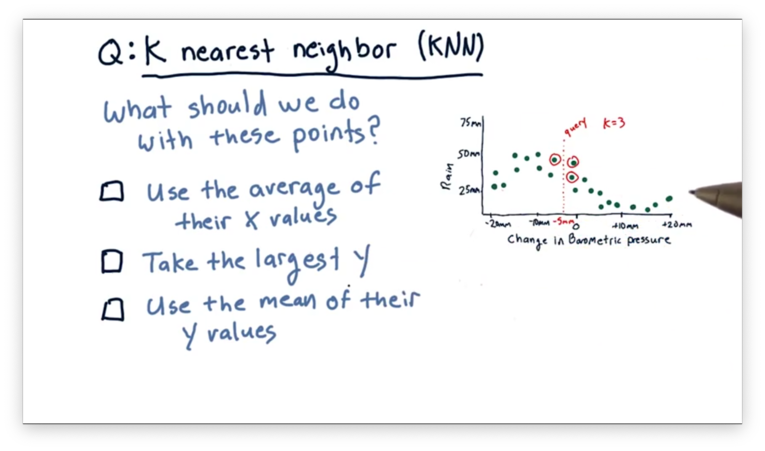 How to Predict Quiz Solution 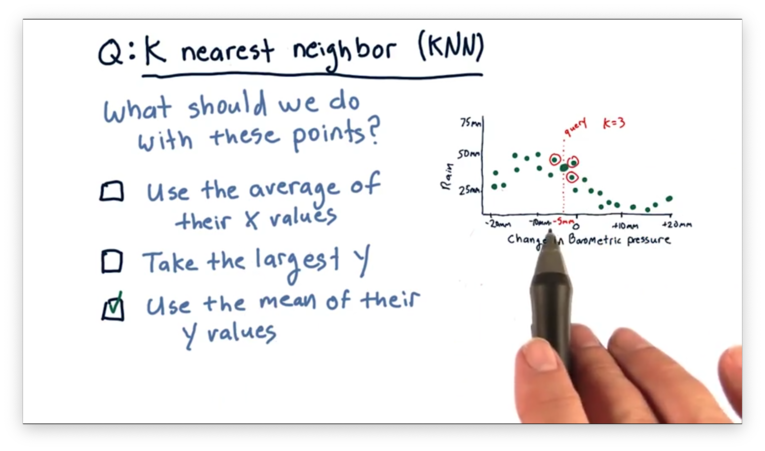 Remember that we want to predict a y-value for the queried x-value. As a result, it doesn't make sense to take the average of the x-values of the nearest neighbors. Additionally, we don't want to take the largest y-value; otherwise, the other neighbors have no influence on the prediction. The correct approach here is to take the mean of their y-values.

We said that the correct method of combining nearest neighbors to make a prediction is to take the average of their y-values. If we repeated this process at many points along the x-axis, we would generate a model that looks like the following. 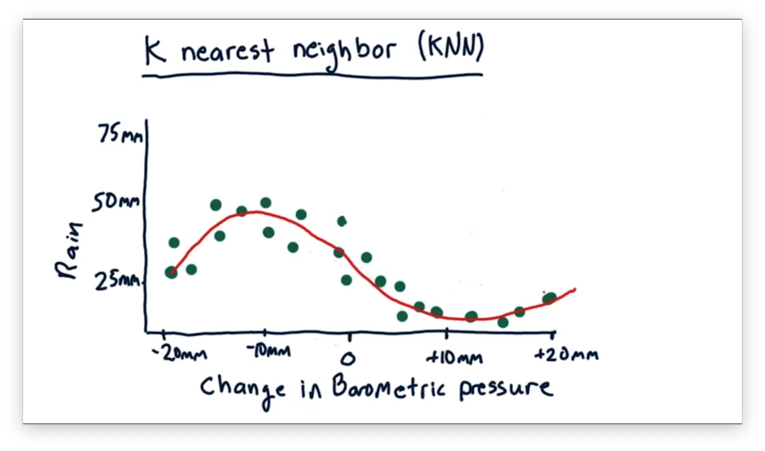 Besides KNN, there are several other instance-based regression methods, such as kernel regression. Whereas in KNN, we take an unweighted average of the nearest neighbors, in kernel regression, we weight the contributions of each neighbor according to its distance from the query.

Let's consider the relationship between variables in two different scenarios. 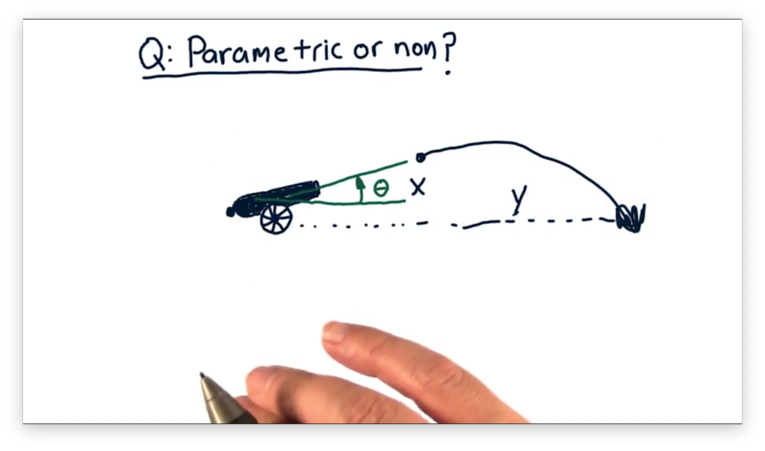 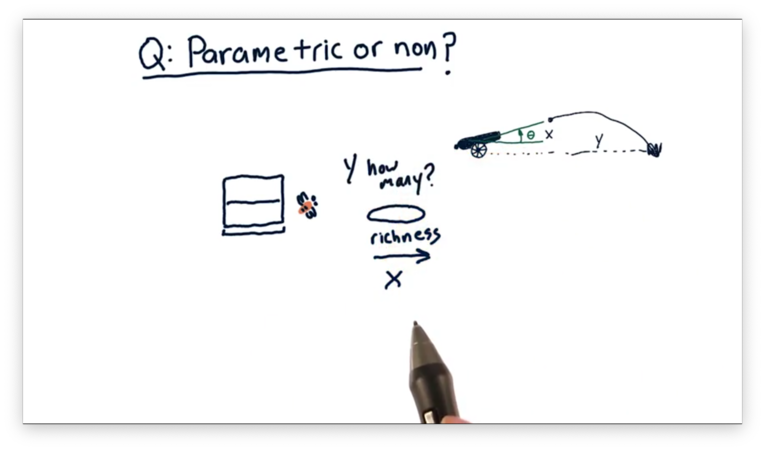 Note that this scenario is slightly different than the first because it's not clear that the number of bees always increases as richness increases. 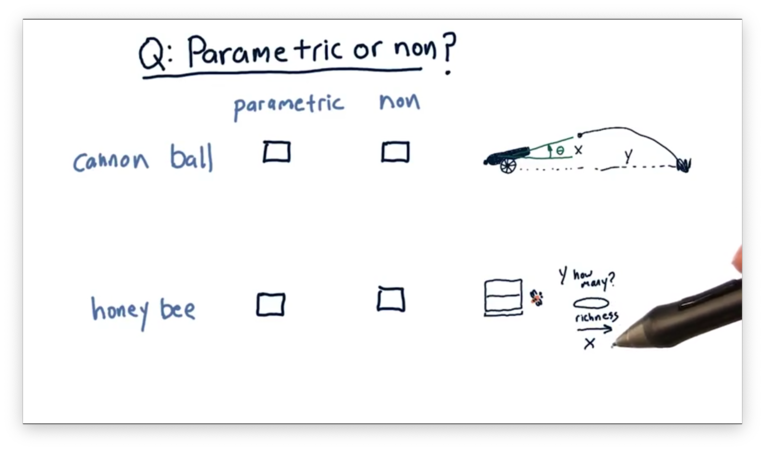 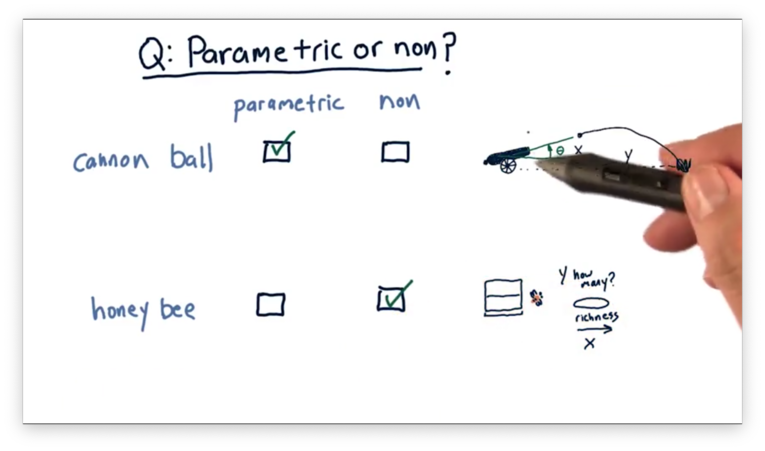 In the first scenario, we can start with an estimate of the underlying behavior of the system in terms of a mathematical equation that expresses how it behaves. This equation is just the equation of trajectory, which we can find online. We can then learn the parameters of this equation such that it describes the relationship between our variables.

In the second scenario, we have no initial estimate for the underlying mathematical equation, so it's better to use a non-parametric model, which can model any "shape" of relationship.

Let's consider the data that we typically use in a finance-based machine learning problem. We have the features that we measure - metrics like Bollinger Bands, momentum, P/E ratio, among others - and the corresponding prices or price changes that we observe.

We want to learn a model that correctly describes the relationship between the features of a stock and its price so that we can accurately predict price from those features in the future.

Consider how we would evaluate such a model. If we test the model using the same data we used for training, we'd have to be suspicious of the result. After all, the model was built using the training data, so it is inherently biased to perform very well on that data.

We call the features that we use for training Xtrain​ and the corresponding prices Ytrain​. Similarly, we refer to the data that we test on as Xtest​ and Ytest​.

First, we pass Xtrain​ and Ytrain​ to a machine learning algorithm, such as linear regression or KNN, which generates a model. Next, we query the model with Xtest​, which gives us a set of predictions Ypredict​.

To evaluate the predictive power of the model, we have to compare Ytest​ and Ypredict​. The closer that values in Ypredict​ come to ground truth values in Ytest​, the more accurate the model.

One thing to keep in mind is that financial data is often oriented in time-specific order. As a result, we usually split our data such that we train our on older data and test on newer data. It's generally frowned upon to do the reverse, as certain lookahead biases occur when training in the future and testing in the past.

It's helpful to standardize the application programming interface (API) when thinking about implementing machine learning algorithms.

Here is an example of how we might use a linear regression learner:

We can imagine using a KNN learner in a very similar fashion. The only difference with the KNN API is that the constructor takes in an additional argument for specifying K.

Let's look at some pseudocode describing a possible implementation of this API for a linear regression learner.

We define our LinRegLearner class, and the associated constructor using the __init__ method. The constructor, in this case, doesn't need to do anything, so we can call pass.

Next, we need to implement the train method. Given a training data set consisting of X and Y, train finds the m and b of the line that best fits the data.

We can use any of several regression algorithms at our disposal as part of SciPy and NumPy to find m, and b, and we store these parameters as instance variables on the learner.

Finally, the query method takes in X as an argument and computes the corresponding Y.

A KNN learner would have the same API, although its constructor would look a little different because we want to be able to specify K: