A Closer Look at KNN Solutions

Assume we have the following training examples plotted below, and we want to use the KNN algorithm to provide predictions for new observations. 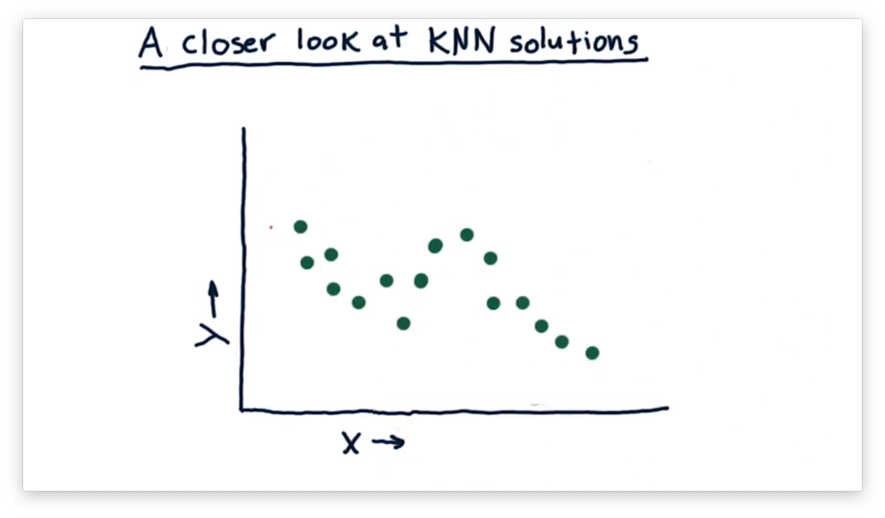 Now suppose we query the KNN model at the following point, near x=0, using the three nearest neighbors to make our prediction. 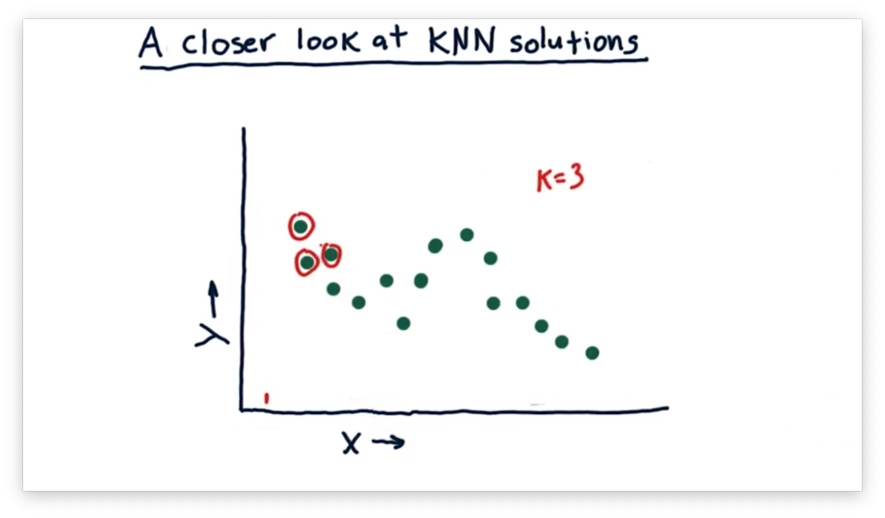 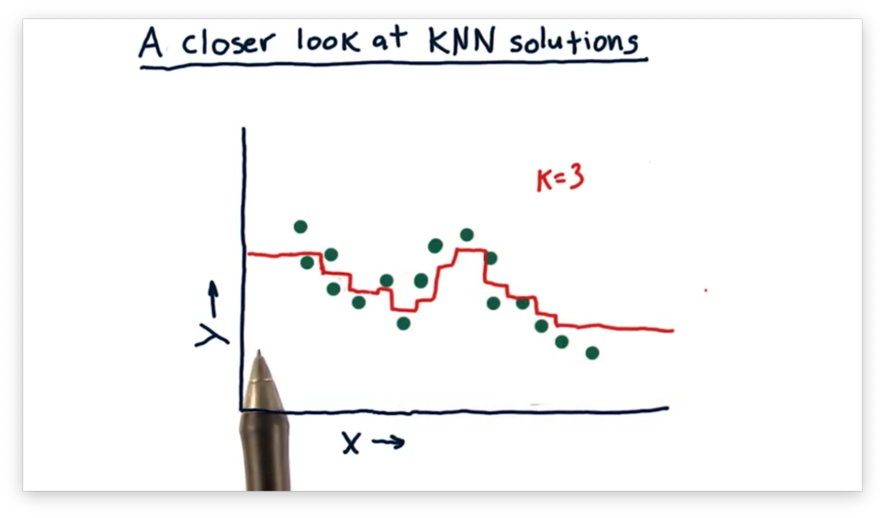 A helpful feature of this model is that it doesn't overfit the data. Since we consider multiple neighbors for each prediction, a prediction is never disproportionately influenced by a single training example.

However, this model is not without its shortcomings. For example, we see flat lines at either end of the plot. After a certain point, the model returns the same prediction for any x because the neighbors don't change. In other words, the model is unable to extrapolate any trends present in the data.

What Happens as K Varies Quiz

Consider the following three models, each generated using a different value for K. 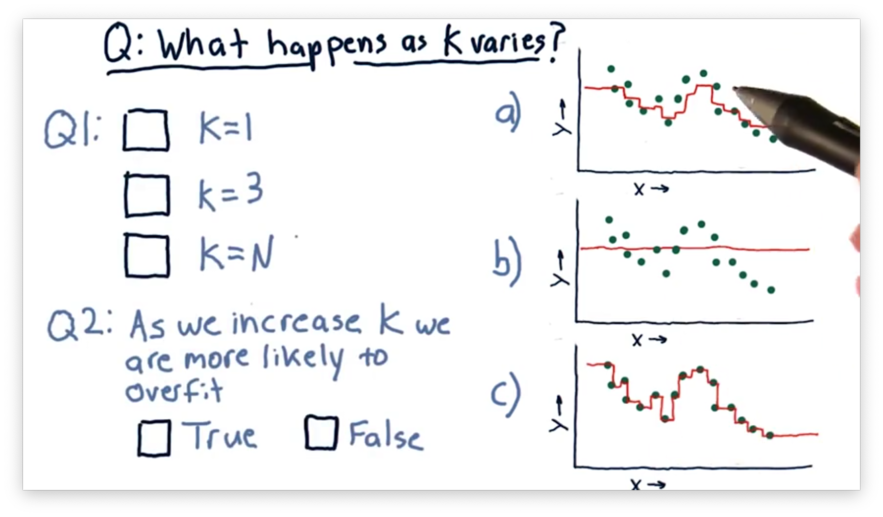 Our first task is to match the value of K with the corresponding plot. Our second task is to decide whether we increase the chances of overfitting as we increase K. An overfit model matches the training set very well but fails to generalize to new examples. 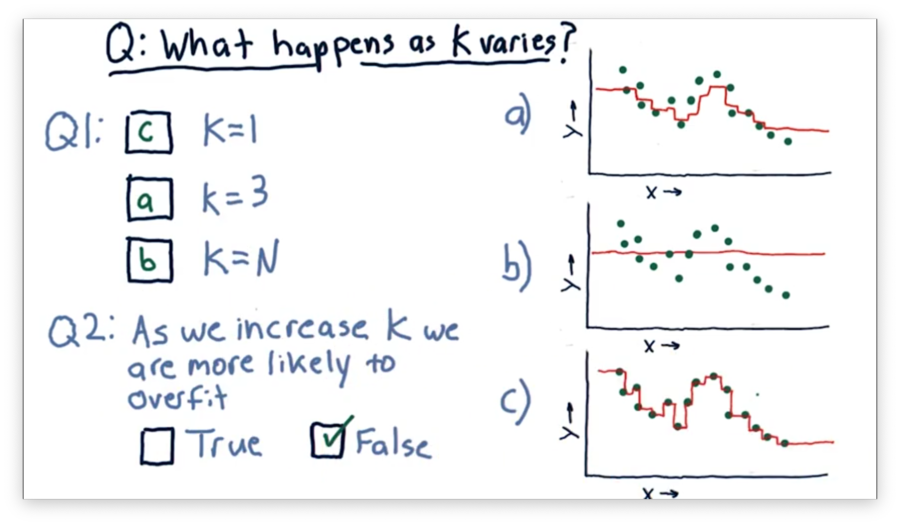 Let's consider the case where K=1. In this case, the model passes through every point P directly, since near P, the only point that has any influence is P.

Now consider the case where K=N. In this case, every point considers all of the neighbors. Thus, the generated model is a straight line passing through the mean of the y values of all the points.

Of course, when 1<K<N, the graph lies between these two extremes. For K=3, the graph roughly follows the points without passing through them directly.

As a result, we see that increases in K decrease the probability of overfitting.

What Happens as D Varies Quiz

Consider the following three polynomial models. The difference between each model is the degree of the polynomial d. 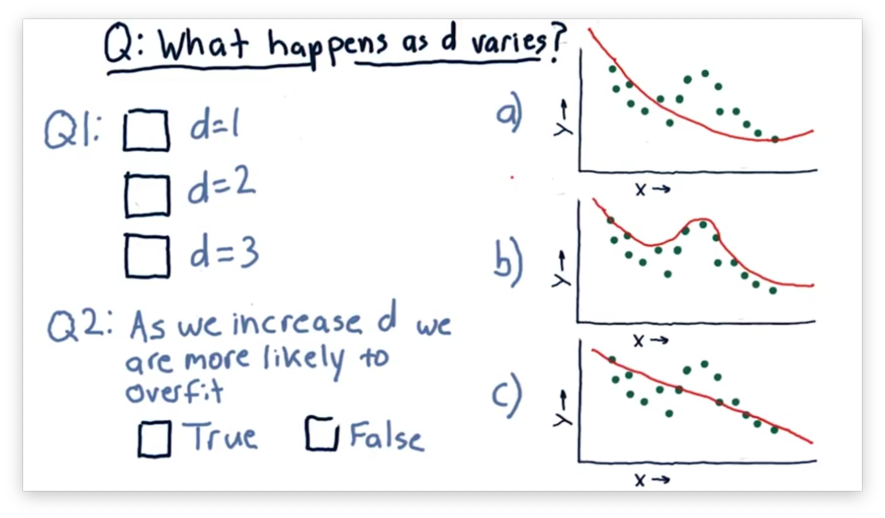 Our first task is to match the value of d with the corresponding plot. Our second task is to decide whether we increase the chances of overfitting as we increase d. 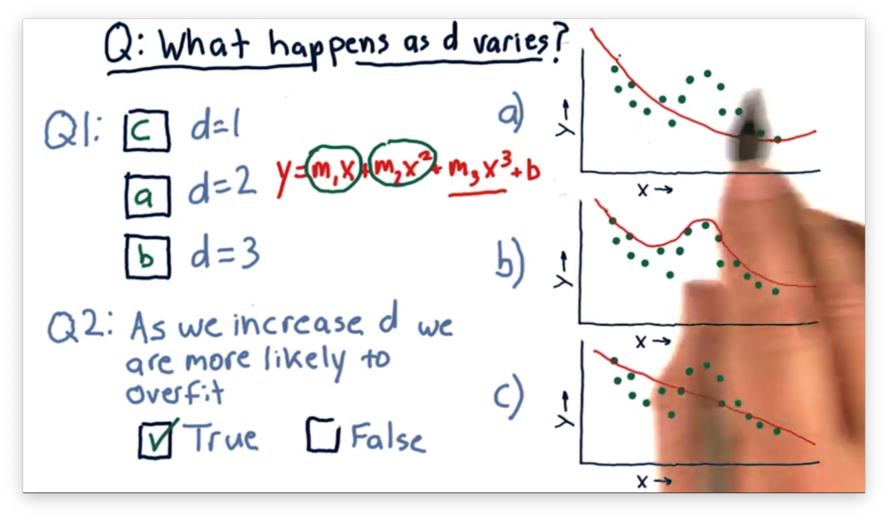 A polynomial of degree two matches the equation y=m1​x+m2​x2+b, which is the equation of a parabola and corresponds to the first plot.

A third-order polynomial matches the equation y=m1​x+m2​x2+m3​x3+b, which corresponds to the second plot.

We see that as we increase d, our model begins to follow the points more closely. Indeed, it can be shown that for N points, a parabola of degree N exists that passes through each point.

Notice that for each of these models, we can extrapolate beyond the data given. This ability to extrapolate is a property of parametric models that instance-based models lack.

We've looked at different graphs of models and visually evaluated how well they fit sets of data. A more quantitative approach to measuring fit is to measure error.

Let's assume we want to build a linear model from the following data. 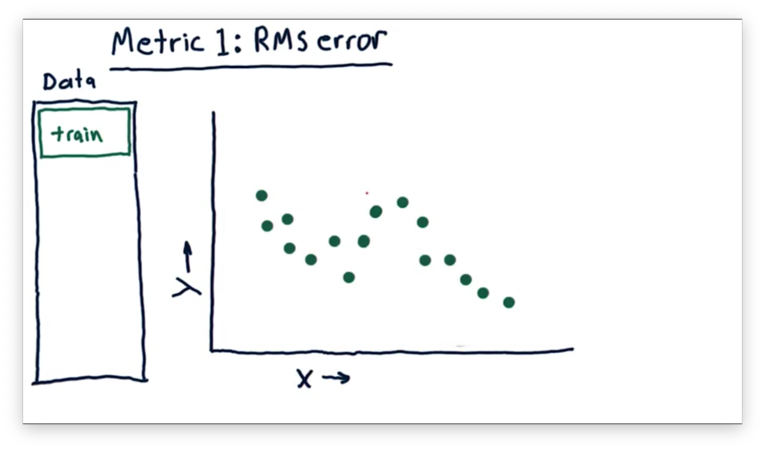 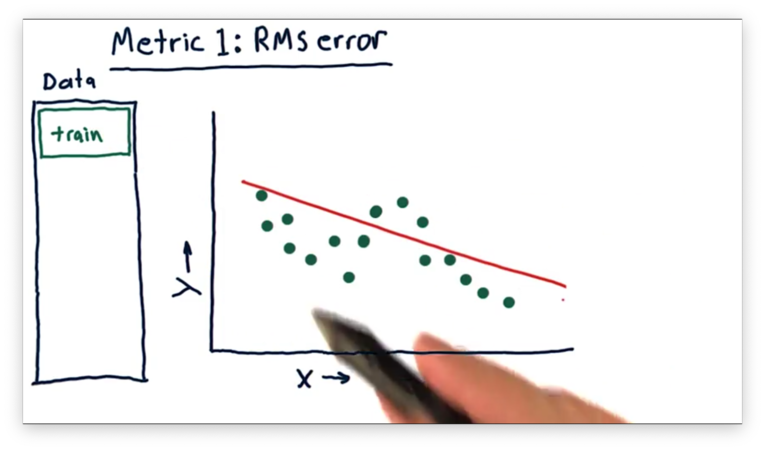 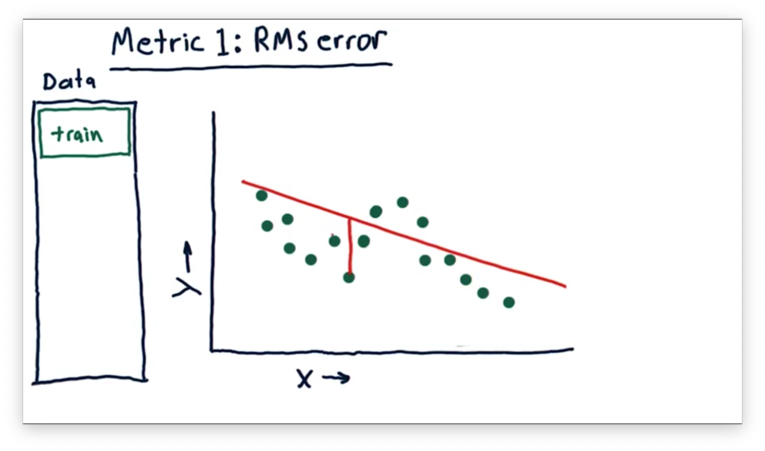 Accordingly, we have an error for every single data point in our data set. 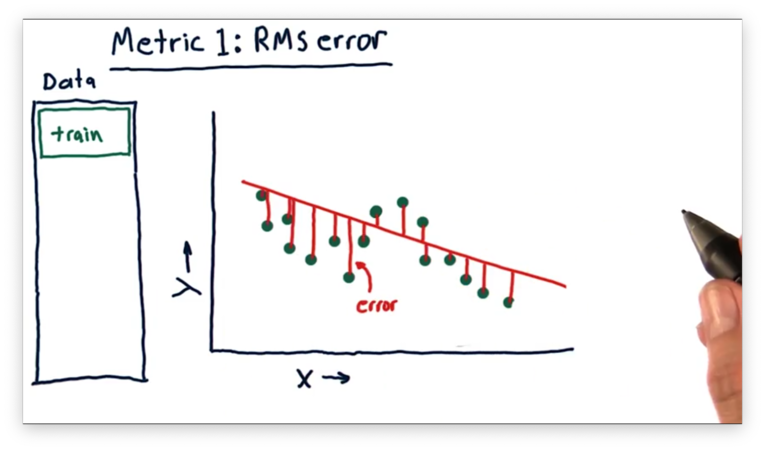 A common type of error is the root-mean-square error (RMSE), which we compute by taking the square root of the mean of the squared errors for each point.

Formally, given a model fit to N data points, each with an error ei​, we can calculate RMSE as:

The RMSE formulation gives us an approximation of the average error, although it emphasizes larger errors slightly more than smaller ones.

In Sample Vs. Out of Sample

Remember from our KNN discussion that it's possible to build models that can perfectly fit an arbitrary data set. In other words, we can create a model that has virtually zero error against our training set.

As a result, it doesn't make sense to evaluate our model against the data on which it trained. Instead, we train our model on one set of data and test it on another, previously unseen set of data: the test set. 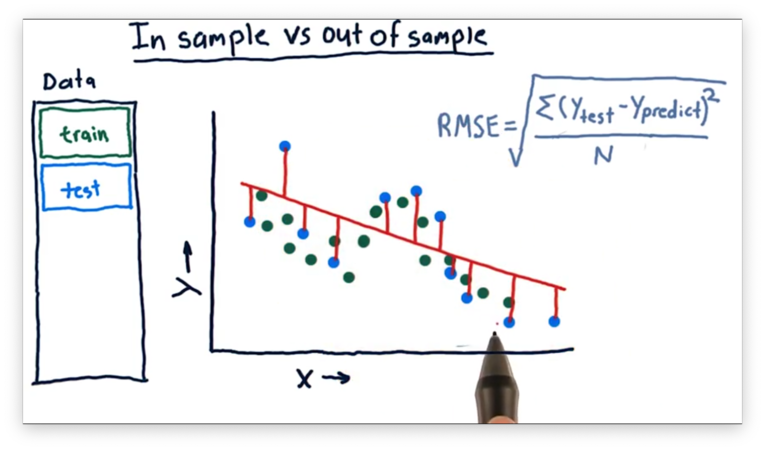 Which is Worse Quiz

Suppose we just built a model. Which error would you expect to be larger: in-sample or out-of-sample? 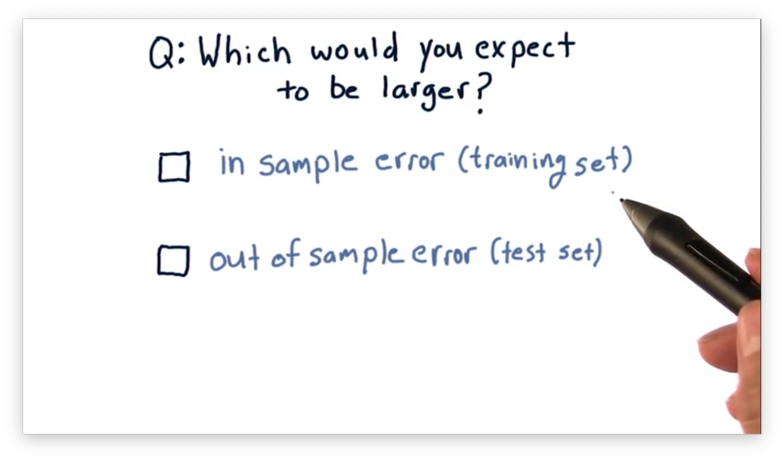 Which is Worse Quiz Solution 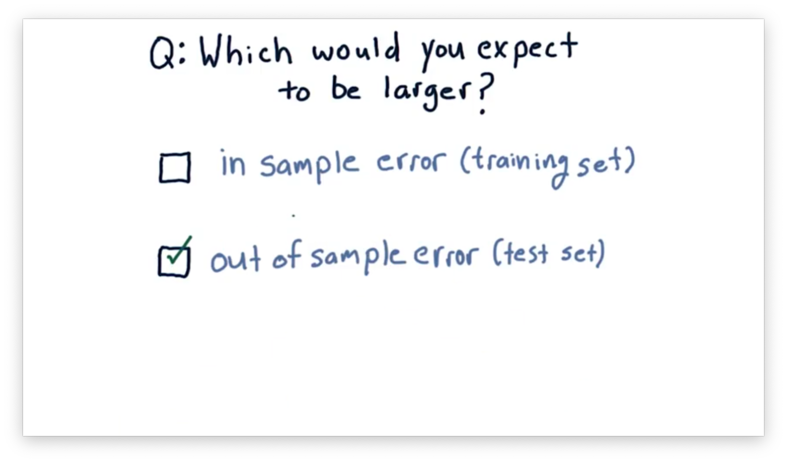 Usually, when researchers are evaluating a model, they split their data into two sets. 60% of the data goes into a training set, and the remaining 40% goes into a test set.

We can think of the process of training and testing a model as a trial. In many cases, a single trial is sufficient to assess a model.

One problem researchers sometimes encounter, however, is that they don't have enough data to analyze their model effectively. They can mitigate this problem by partitioning their data set into different subsets such that they can run multiple trials.

Cross-validation is a great tool, but typically doesn't fit financial data applications well, at least in the form we've seen so far.

In financial applications, we are typically working with temporal data, and arbitrary selection of training and testing sets can create a situation where our testing data predates our training data.

For example, let's suppose we slice our data set into five equal partitions. In trial one, we train on the slice one and test one slice two. In trial two, we train on slice two and test on slice three. We can follow this approach to generate a total of four unique train/test splits from our single set of data.

Another way to evaluate the accuracy of a regression algorithm is to look at the relationship between predicted and observed values of our dependent variable, y.

Let's suppose we have a model M and a set of testing data containing Xtest​ and Ytest​. We can query M with Xtest​, and it will return a set of predictions Ypredict​. We can then compare the predicted values against the ground truth.

Ideally, we would want to see a correlation between Ytest​ and Ypredict​ of precisely 1, which would indicate that the two sets of data are identical; that is, our model made no prediction errors.

Given two ndarrays n1 and n2 of identical shapes, we can compute the correlation between them like:

Let's think about the relationship between RMS error and the correlation between Ytest​ and Ypredict​. Which of the following statements is true? 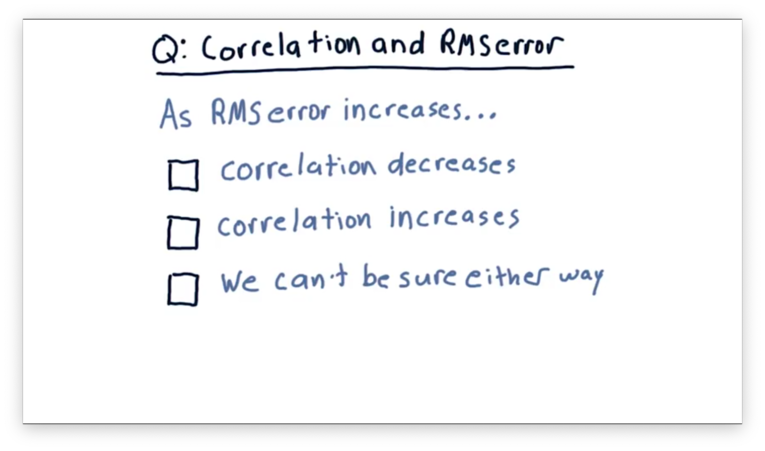 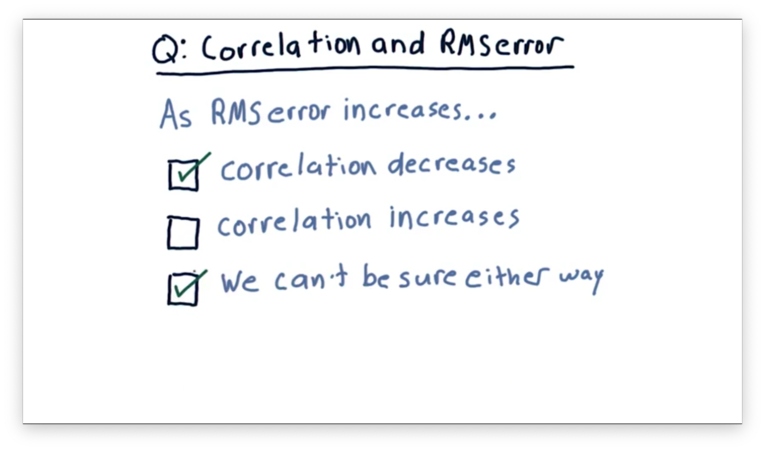 We can look at the in-sample error first. When d is smallest, our error is highest, and as we increase d, our error drops. As d approaches the number of items N in our data set, our error can approach zero. 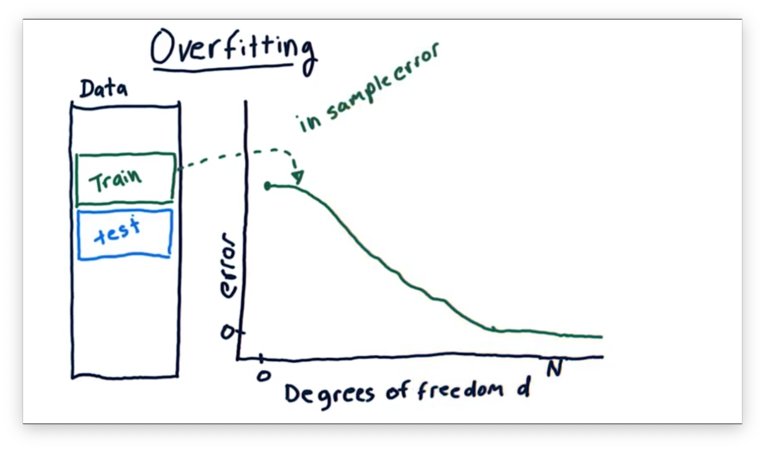 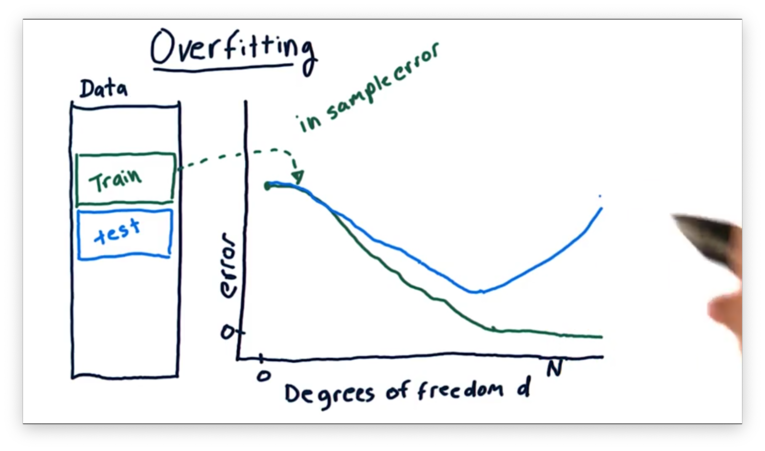 We can define overfitting as the range in which adding additional factors to our model results in a decrease in in-sample error but an increase in out-of-sample error. 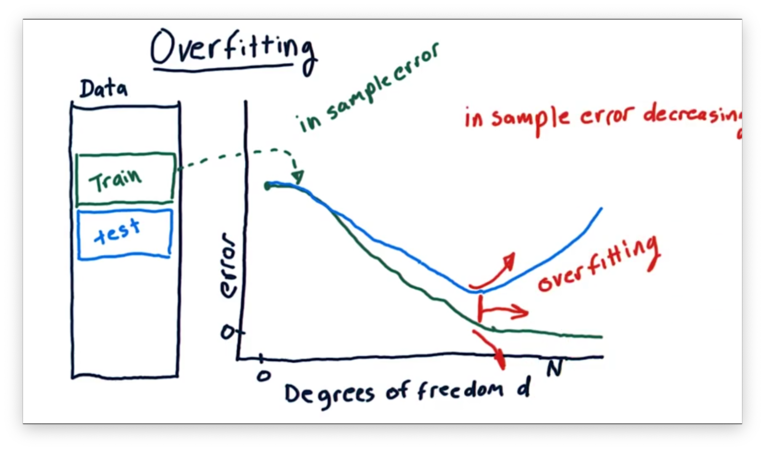 Let's consider overfitting in KNN and how in-sample and out-of-sample error changes as K increases from 1 to the number of items N in a data set.

Which of the following plots correctly represents the shape of the error curves that we would expect for both types of error as we increase K? 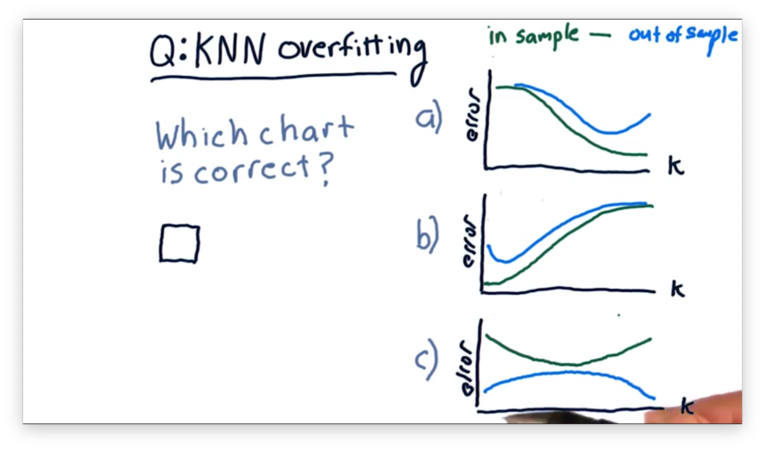 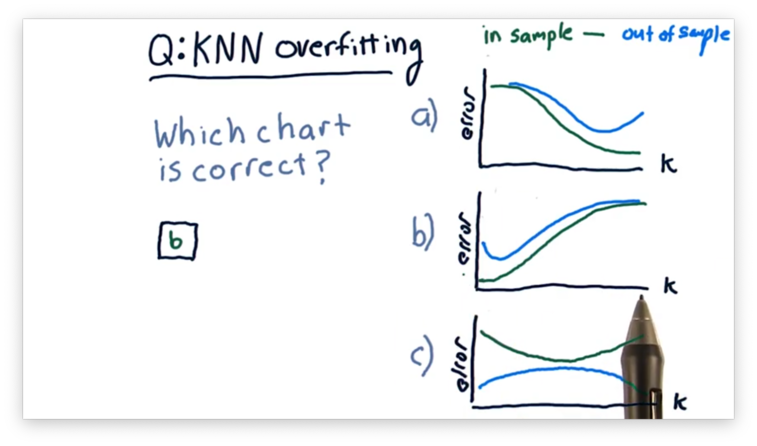 Remember that KNN models are least generalized when K=1. In other words, when K=1, the model predicts each training point in the data set perfectly but fails to predict testing points accurately. As a result, KNN models overfit when K is small.

A Few Other Considerations Quiz

There are a few other factors worth considering when evaluating a learning algorithm. For each of the following factors, which of the two models has better performance? 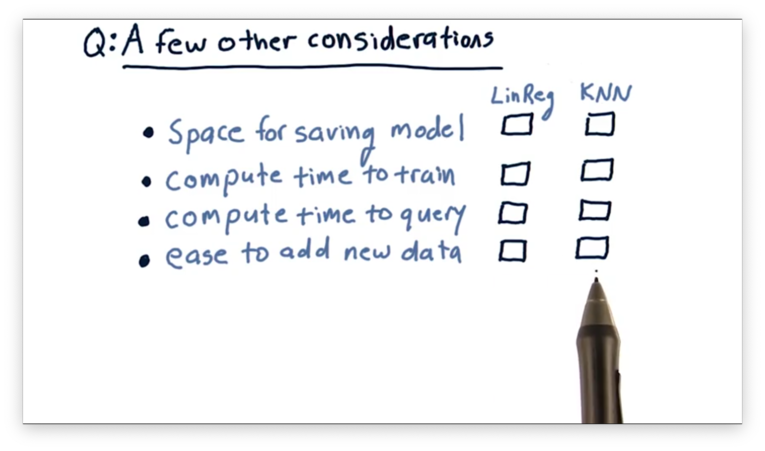 A Few Other Considerations Quiz Solution 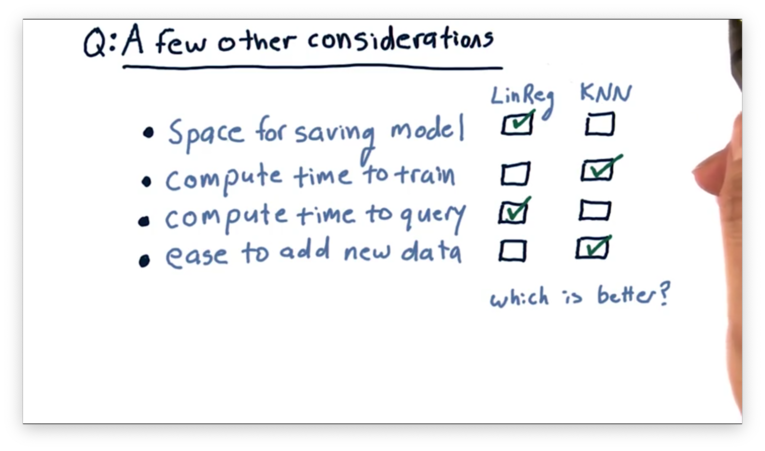 Adding new data is quicker in KNN than in linear regression. Incorporating new data into a model requires retraining the model, but, as we just saw, the training time for a KNN model is zero.