Users delegate to machines that act on their behalf.

A credential is a statement that we can verify to be true.

Because the user doesn't have a trusted path to the computer we have to have things speaking on behalf of other things.

We need to set up a secure communication channel between nodes.

A principal N might be in a role. For example, N as manager means that N is taking on the role of a manager, the as operator is for roles. The role can limit authority because it only lets you do a subset of the things you could otherwise do.

The machine M could be many different things, but when it runs M as Linux then it is restricted to whatever Linux can do. So a node N is then M as OS.

We have established that

When we run a program P with digest D that makes a request s:

If the process running a secure program P with digest D is Pr​ then the credential of Pr​ is M as OS as D. The credential is just a claim that we can believe about who the process can speak for.

If we have an untrusted file system then we can use a known digest of the program to verify that the program is what it should be. We have seen this before and it is called attestation.

If P is the OS then secure loading is also known as secure booting. Since we have securely booted then we have a credential, M as OS.

This OS can load one or more programs, which it may also securely load.

We assume that M comes with keys Km−1​,Km​ and a certificate KCA​ says Km​⟹M. The certificate is signed by the private key of the trusted certificate authority. We need to make sure that M is a globally unique identifier like a manufacturer serial number.

Is it practical to assume this? The Trust Policy Module (TPM) was supposed to have such a certificate. Generally the assumptions we are making here aren't entirely realistic for most machines.

M really is the initial code that gets executed when a machine is first powered on, like BIOS.

We want it so that M only loads a trusted OS, the TPM or boot ROM can store the OS digest and perform attestation.

As part of the boot process we create a new certificate for the node. We make keys (Kn​,Kn−1​) and have a certificate saying that Kn​⟹M as OS. We trust this certificate because it is signed by the machine which is trusted because it has a certificate from the CA. M is going to protect Km−1​ even from the operating system which is why we use Kn​.

Once the OS is secured then we can perform user authentication and these users will launch processes that run on their behalf, and we can use attestation to make sure the processes running are the correct ones.

This is delegation. U delegates authority for M as OS to assert that a process P runs on behalf of U.

This is different than "speaks for". If N speaks for U then N can speak unconditionally on U's behalf. If we do not want N to become as powerful as U then we use delegation. Delegation transfers limited authority.

Delegation from A to B results in a new principal:

Delegation is established in two steps:

This results in: B∣A⟹B for A. Delegation allows user login.

We use many assumptions to demonstrate the security of our system. Let's list them:

These statements lead to KN​∣KU​⟹KN​ for KU​.

This lets the node make requests saying they come from KN​ for KU​.

When the user logs in with their private key the OS has statements signed with this private key. These signed statements provide evidence that U is logged in.

The OS is securely booted and has some program you would like to run. It will make requests that come from M as OS as P (P is the program) for KU​.

Credentials used to establish the communication are either pushed (sent from the client) or pulled (requested by the server).

Here are some things we have discussed so far:

We have a machine that has securely booted an OS that is running an accounting application that is used by an authenticated user. This application will send a request over the network channel, which is really the secure channel we have built. This request is responded to by the server which is also running a secure OS.

The accounting application makes a request of the form:

M as OS as Accounting App for User

And the file service on the server will have an ACL that permits such access.

Here are some questions you might ask about the security, along with the work we have done so far to answer the questions:

We can also ask questions about the server's OS and services, which are answered in the same manner as for the client.

Putting it all together

Extend trust from machine to OS, the machine trusts the OS because of secure boot -

KN​ is used as the public key when making a secure communication channel C with the server.

After all of this work we get C ⟹ M as OS.

When a user logs in we get: N | bwl-user ⟹ M as OS for bwl-user. When running our accounting application the credential will be M as OS as Accounting for bwl-user. This process sends "read-budget" over the secure channel to the server.

Credential Processing at the Server

The server's ACL is given previously as

The various statements made in the preceding sections are all sent to the server (pushed) or the server can request (pull) the statements. Some calculations using our axioms allow for a proof that the request should be granted.

Here is a diagram that summarizes how everything fits together. 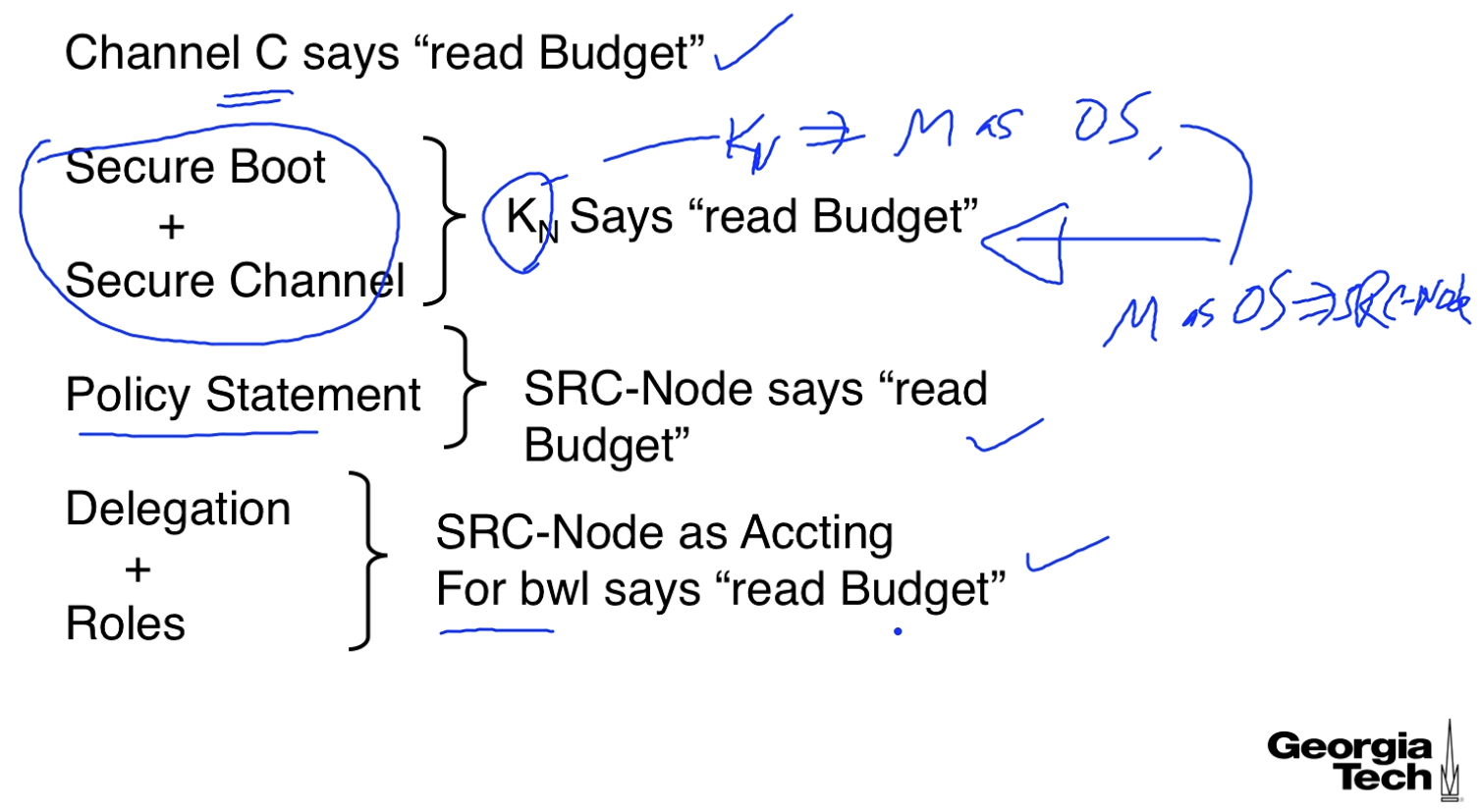 Let's revisit and summarize some of the components of our secure architecture.

You should be convinced that our architecture is a good way to build things but understand where its limits are.

Network attacks like man-in-the-middle are not possible because we set up a secure communication channel. The nodes have certificates and do a key exchange.

If someone gives you bad certificates and you accept it, then you are vulnerable to man in the middle attacks.

Theft of user private key is another threat. But, the attacker needs the correct machine M to access the application because of how the ACL is set up.

We are protected from a trojan accounting application by using attestation. For the same reason the machine will not load a compromised operating system.

But, if the OS is compromised after it is booted then we are in big trouble. Trojan applications can be loaded and user private keys can be leaked.

The SGX enclave can manipulate sensitive data that is protected from non-privileged and privileged software.

Suppose we want an application to run in an enclave on a remote platform (i.e. the cloud). We don't want to have to trust the software stack, but we must trust the hardware stack.

We verify that the enclave code is correct through remote attestation and we have secure authenticated channels for the exchange of sensitive data.

Our client application has the enclave which communicates to the service provider over an authenticated secure channel. The client also must somehow communicate with the attestation service for attestation. 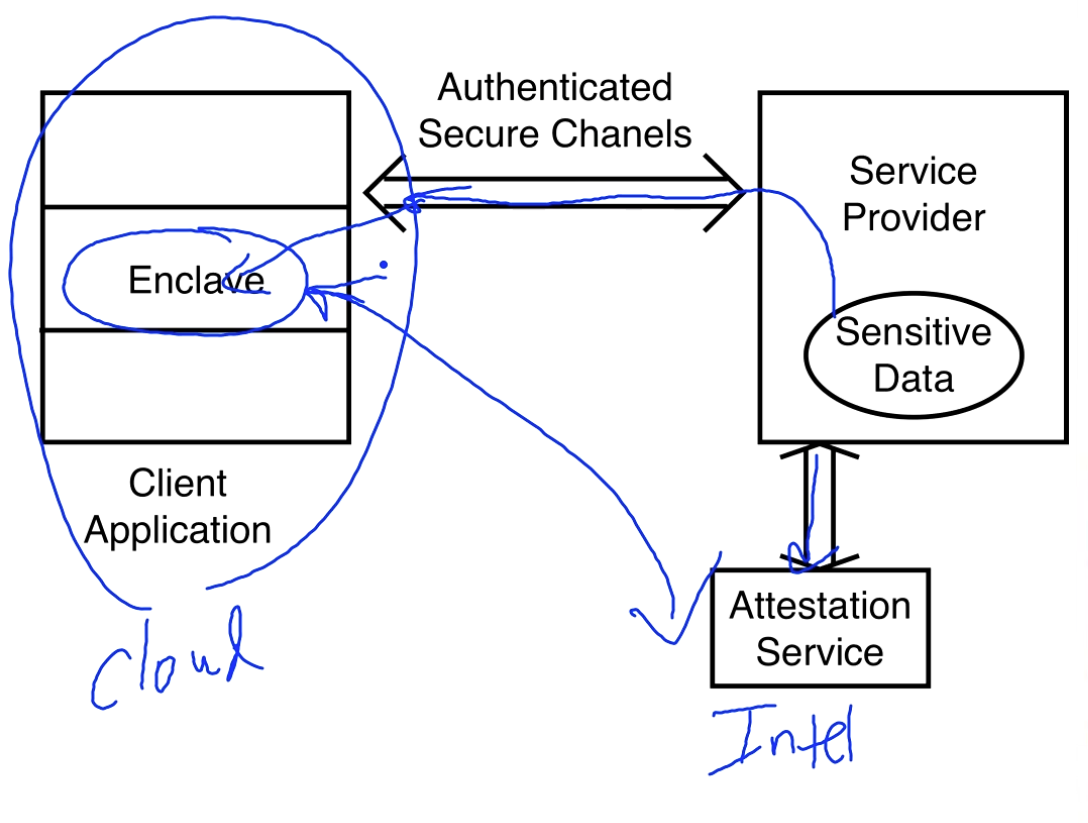 We have seen that the service provider is a principal that holds sensitive data that is sent to the client application. The software in the enclave (like our accounting application) is written by an independent software vendor (ISV).

The ISV has a certificate given by a trusted CA. The ISV certificate, CA says KISV​⟹ ISV.

The Intel Attestation Service (IAS) receives the certificate from ISV and issues a service provider ID (SPID). The software in the enclave can now communicate with the service provider.

Enclave certificate comes from the ISV, we must trust the key for the ISV.

Diffie-Hellman key exchange is used to exchange keys from the client and server. Both the enclave and the service provider have public keys and certificates so the communication can be secure.

The client hardware can make a digest of the enclave for attestation. This digest is sent to the service provider, who sends it to the Intel Attestation Service (IAS). Intel has worked with the software vendors to get the knowledge it needs to verify the digest using the IAS. After verification we feel confident in sending sensitive data to the enclave.