We have a process P making a request r for a protected resource R. Authentication tells us the source of the request r, a UID is associated with the process P to help determine the source of R.

Authorization addresses the question of how to decide if a request r with user id UID should be granted or not.

The TCB has an internal state that helps it make decisions about granting or denying requests. 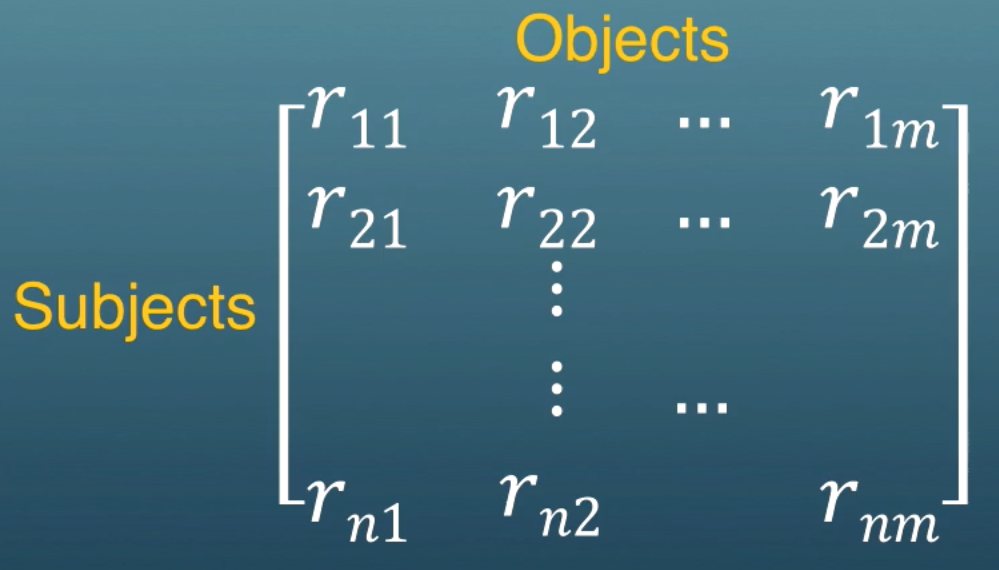 These rights might be read, write, execute for a file. More examples are create, delete, and ownership. There are meta-rights like being able to revoke other user's rights to the object, or being able to give rights (propagation).

The ACM is dynamic. We can have new users coming in, new processes being created. The number of rows and columns changes. The entries in the matrix can change as well.

To change the ACM you perform operations. Here are some examples.

create(s, f) is where a subject s creates a file f. This will create a new column in the matrix, and set the permission for the entry in the ACM. ACM[s, f] = {own, read, write}.

grant(s, f, read) grants read access for file f to subject s. The owner makes this request (the owner is not s). If the owner runs this command then s will get read permissions, ACM[s, f] = { read }.

HRU is the initials of the authors. For a given initial state and HRU commands (these are more formal and general than the revoke and grant commands just discussed), does there exist a sequence of commands that results in access right r appearing in a cell of the ACM in which it does not appear in the initial state.

It turns out that this problem is undecidable. Undecidability is a concept relating to if an algorithm can be constructed to always provide a correct yes/no answer. An example of an undecidable problem is the halting problem, which is worth knowing if you haven't read about it. The authors reduced the problem of computing the safety property to the halting problem, showing that this is undecidable and we cannot construct an algorithm.

ACM Representation and Use

The ACM captures the state that the reference monitor needs to make decisions related to access control.

Many elements of the access control matrix are empty. Least privilege implies most users have access to only a small fraction of the total resources. Only in cells with permissions are non-empty. Matrices where most of the cells are empty are called sparse matrices.

Because the matrix is sparse we don't store the empty entries of the matrix. There are two ways to represent the ACM. Access control lists (ACLs) and capability lists (C-lists).

The ACL is stored as metadata for the object and the C-list is stored with the user.

Suppose we have a pay-per-user service where we compile files for customers. We have a "billing" file that is updated after each time the service is used. What happens if the customer tries to compile a file and output the compiled file as "billing"?

With ACLs there is not way to stop the corruption of the billing file. With C-lists it is possible.

Very compact, having a total of 9 bits. Owner, group, and others could have r, w, and x corresponding to read, write, and execute. Using chmod you can set these bits. We don't need a long list of access control entries in the ACL, we just use the 9 bits.

We must open a file before we use it. After the call we get a file descriptor fd. This file descriptor points to the inode table which has a pointer to the file as well as the access control list. 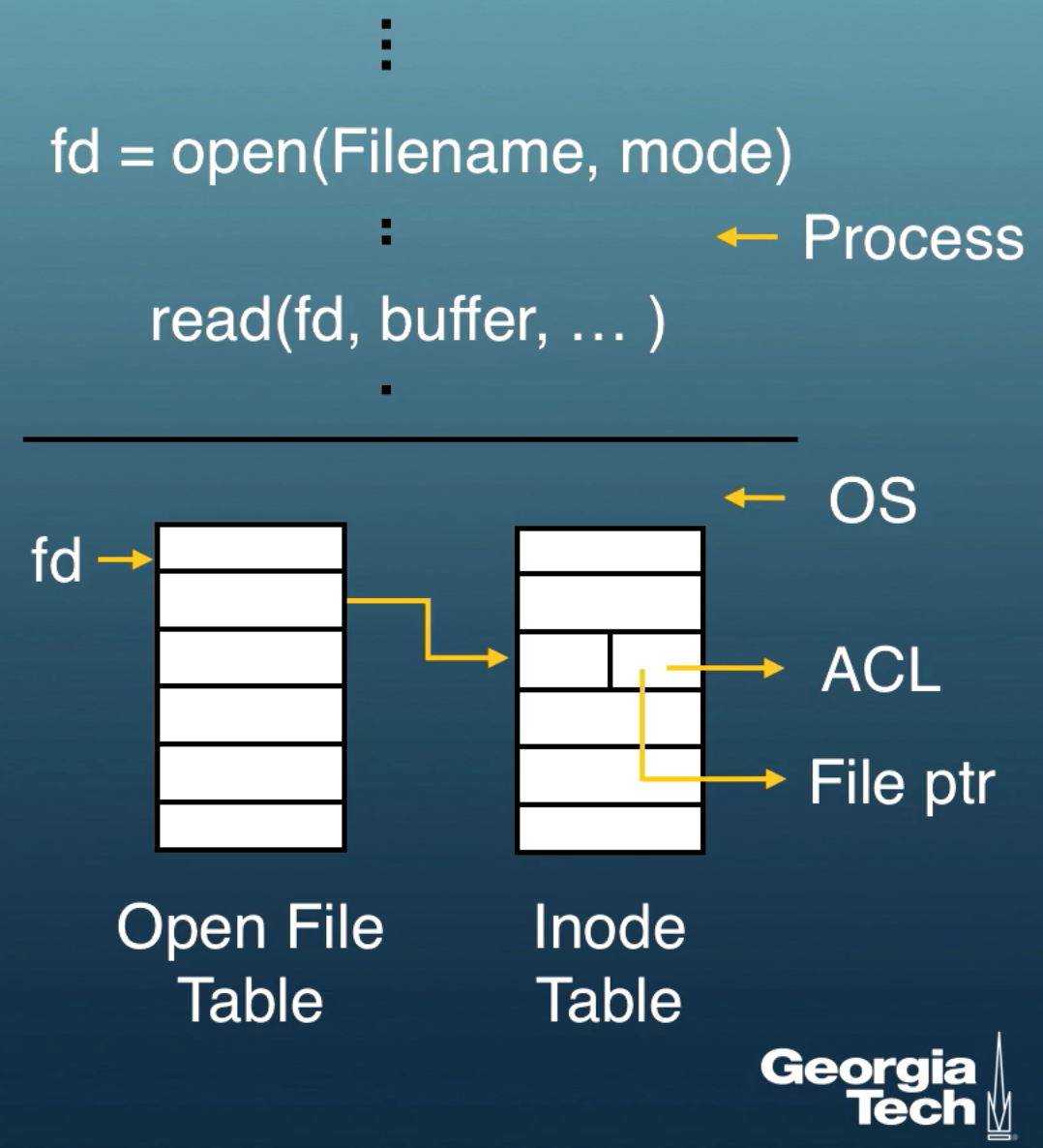 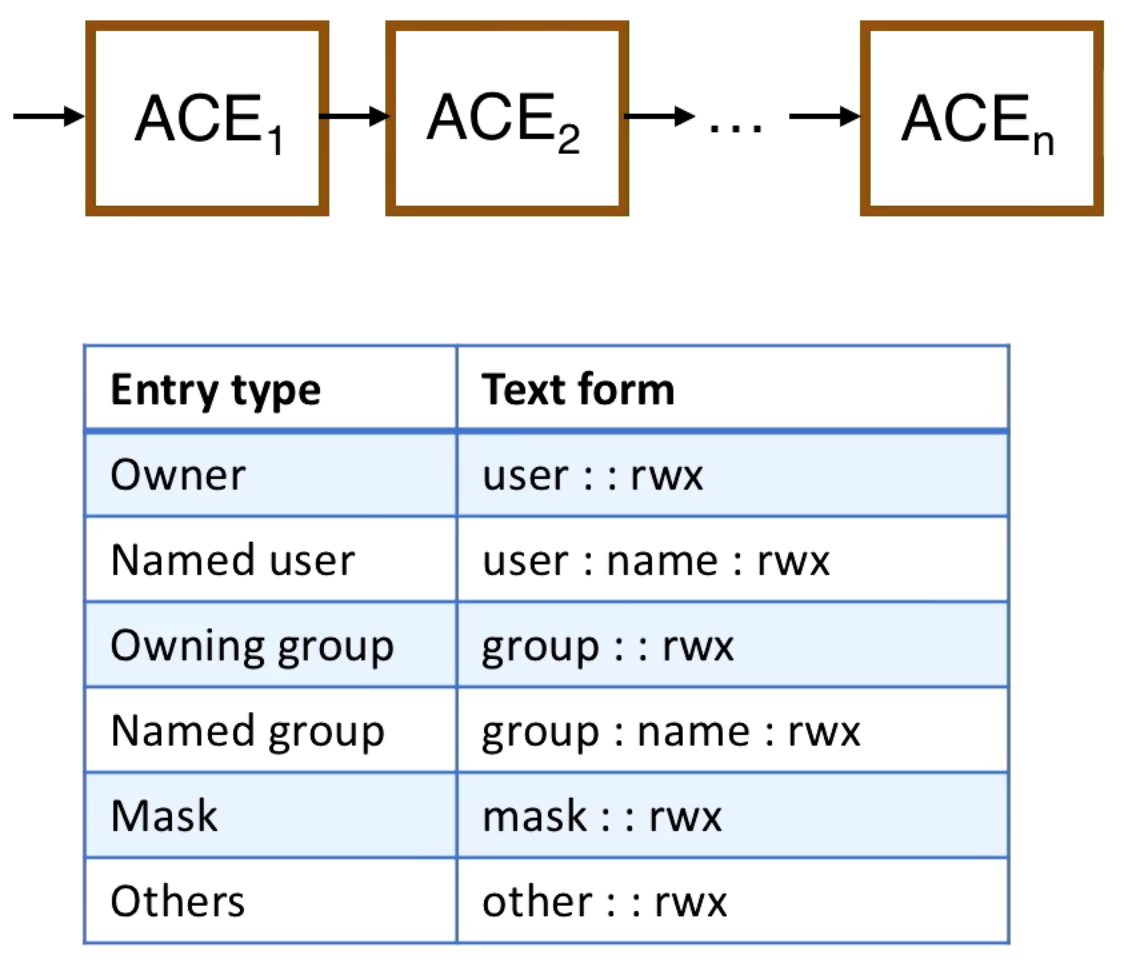 There are different types of access control entries (ACEs) in the ACL. There are entries for the owner and non-owner named users.

You can simplify the ACL by grouping users. There is the owning group and named groups.

There are other users which are not explicitly given in a user or group. We also have masks which let us modify the permissions for all users. 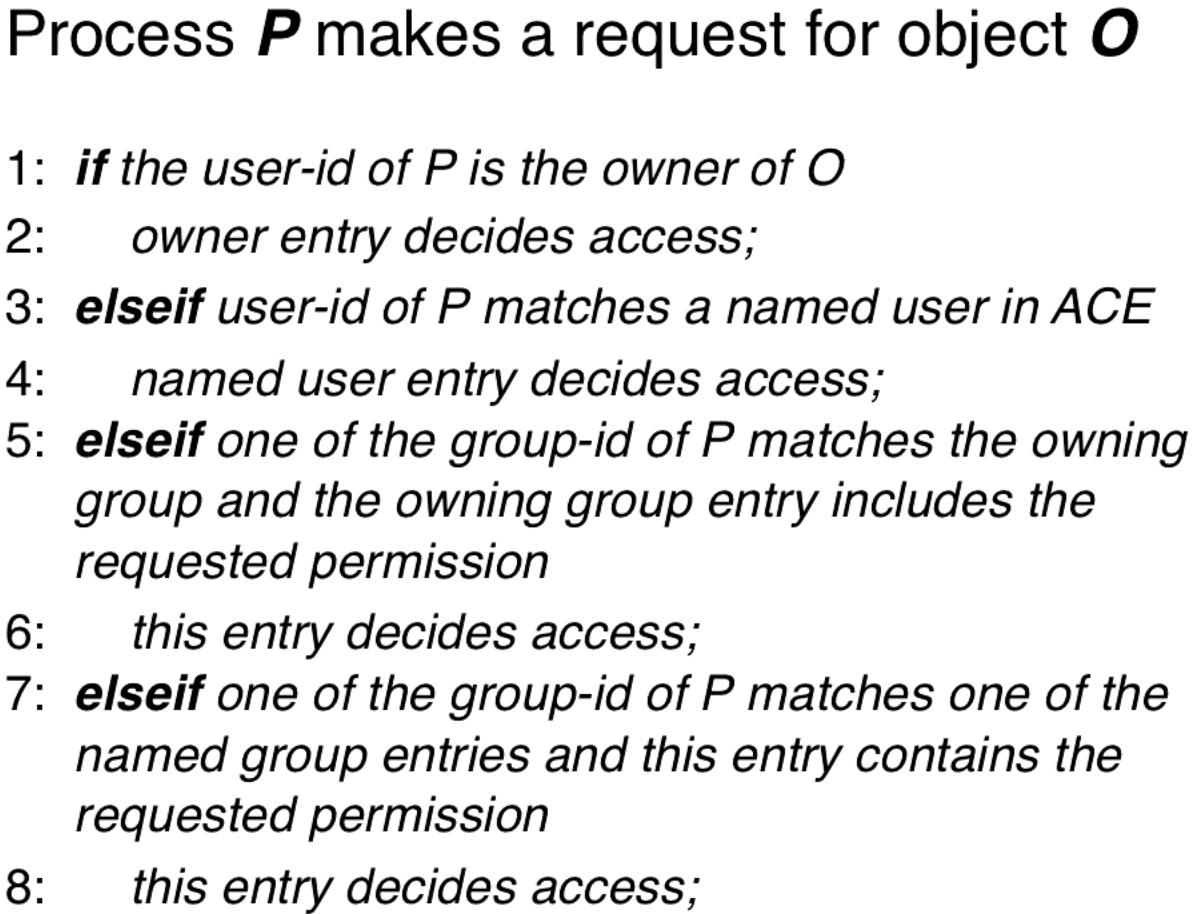 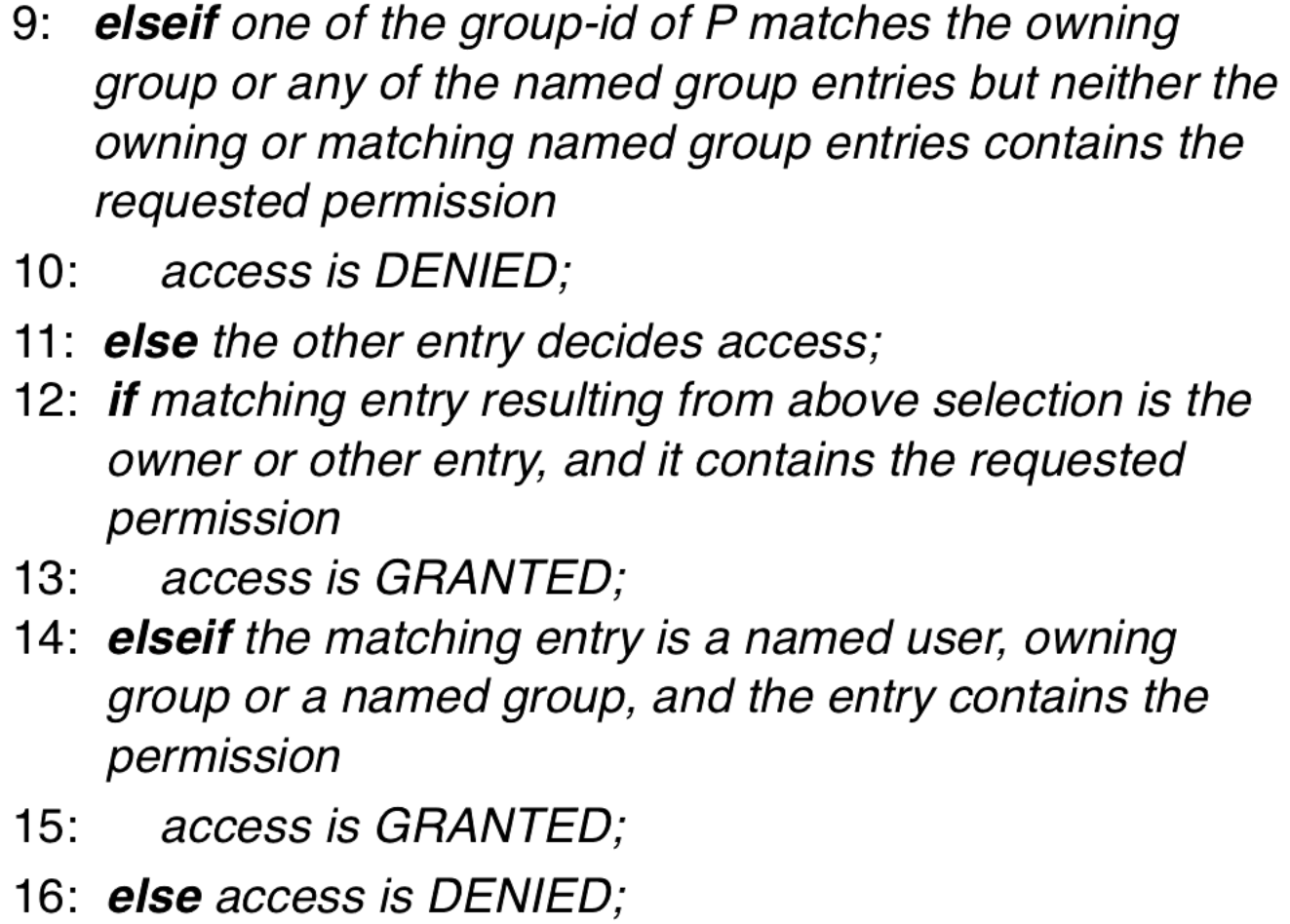 A user U's processes will run with their user-id. If a user wants to update their password, the executable that updates their password in /etc/passwd cannot be run with their user-id, because their user-id doesn't have the right permissions to modify the /etc/passwd file. Executable files can have a setuid bit that lets the user-id change to the owner of the executable file, escalating the priveleges. There is an explicit call setuid() that can be used to modify privileges. There is a setgid bit to set the group ID.

There are different types of user-ids for a process.

setuid(uid) requires that the UID be equal to the real UID or saved UID when the effective UID is not zero/root.

fork() and exec() calls allow you to create new processes, it will carry over the real UID and effective ID from the forking or executing process.

You can ponder this diagram to understand the behavior of setuid.

Windows has ACLs similar to the UNIX based systems, but there are ALLOW (positive) and DENY (negative) access control rights.

Java has classes, which instantiate objects, which have methods and byte code run by the JVM. This code can come from anywhere, you might download code and run it on your phone.

Code that is local to your machine vs. code that comes from somewhere else should have different access rights. Untrusted code might have its ability to access the filesystem or internet limited.

Here is what a policy file looks like in Java. The OS might not see the details of this, but these fine grain permissions are applied by the JVM.

If you have multiple objects in the stack all of the objects in the stack must have access to perform whatever action you are performing. This is called stack introspection. So in the case that our stack has game->graphics->java systems all on the stack, each one of them must give permissions for the actions being performed. 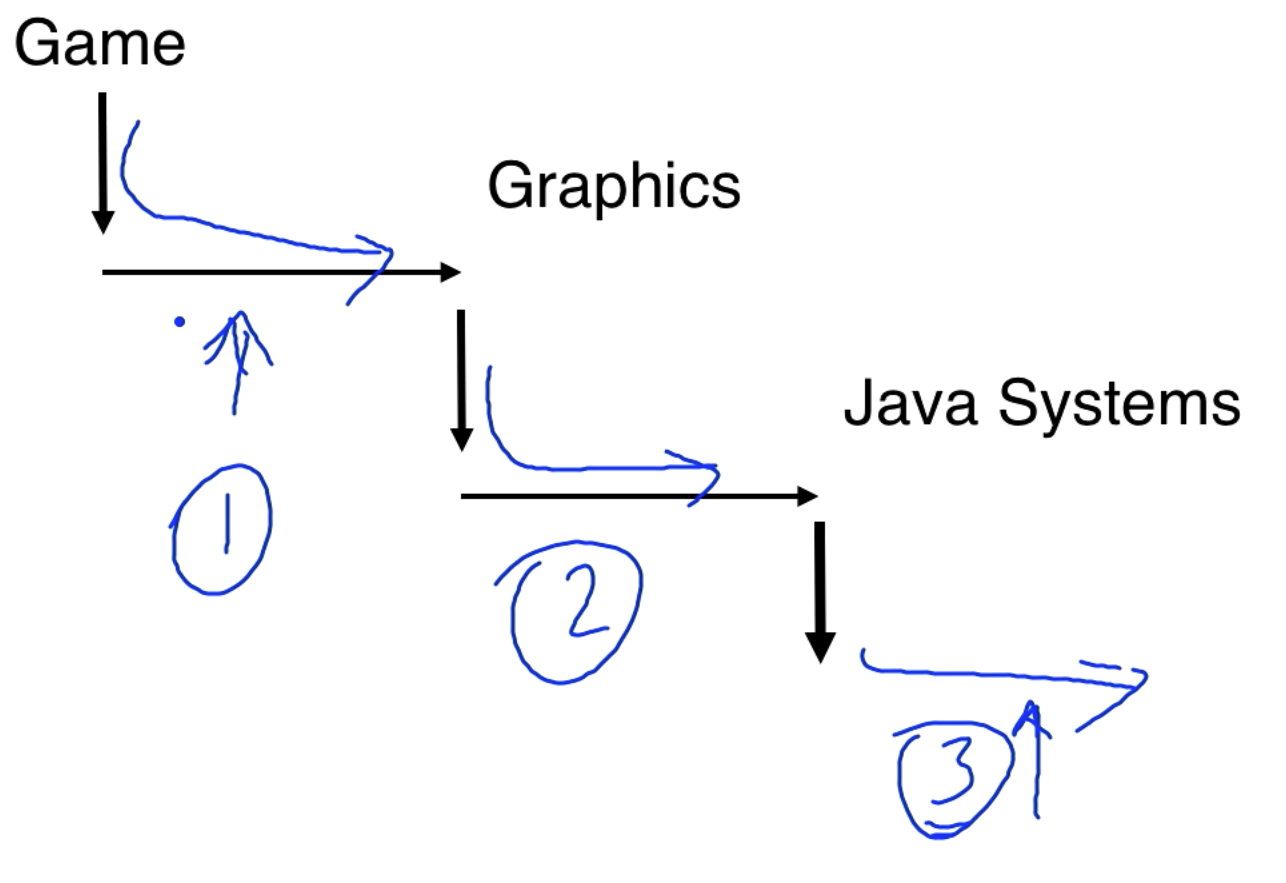 So our access rights are determined by the path we take as well as the policy file.

Hydra is a system that uses C-lists for security.

A capability is an element of a C-list. It is unique, unforgeable, and sharable handle for object O. There was a 64 bit object id + 16 bits of generic rights + 8 bits of auxilliary rights.

The capability for O has associated access rights that define how holder of a capability can access O. The hydra kernel was based on capabilities.

Each call to an object presents a capability to the object which is validated by the kernel.

In Hydra every object has a capability list. While you are in the object you have access to its C-list.

When we go into an object we get new permissions.

We have two users that want to share a file. When we make a file we got a capability. So both C-lists must have the capability for the file. 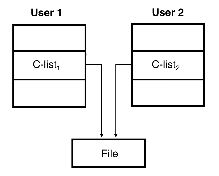 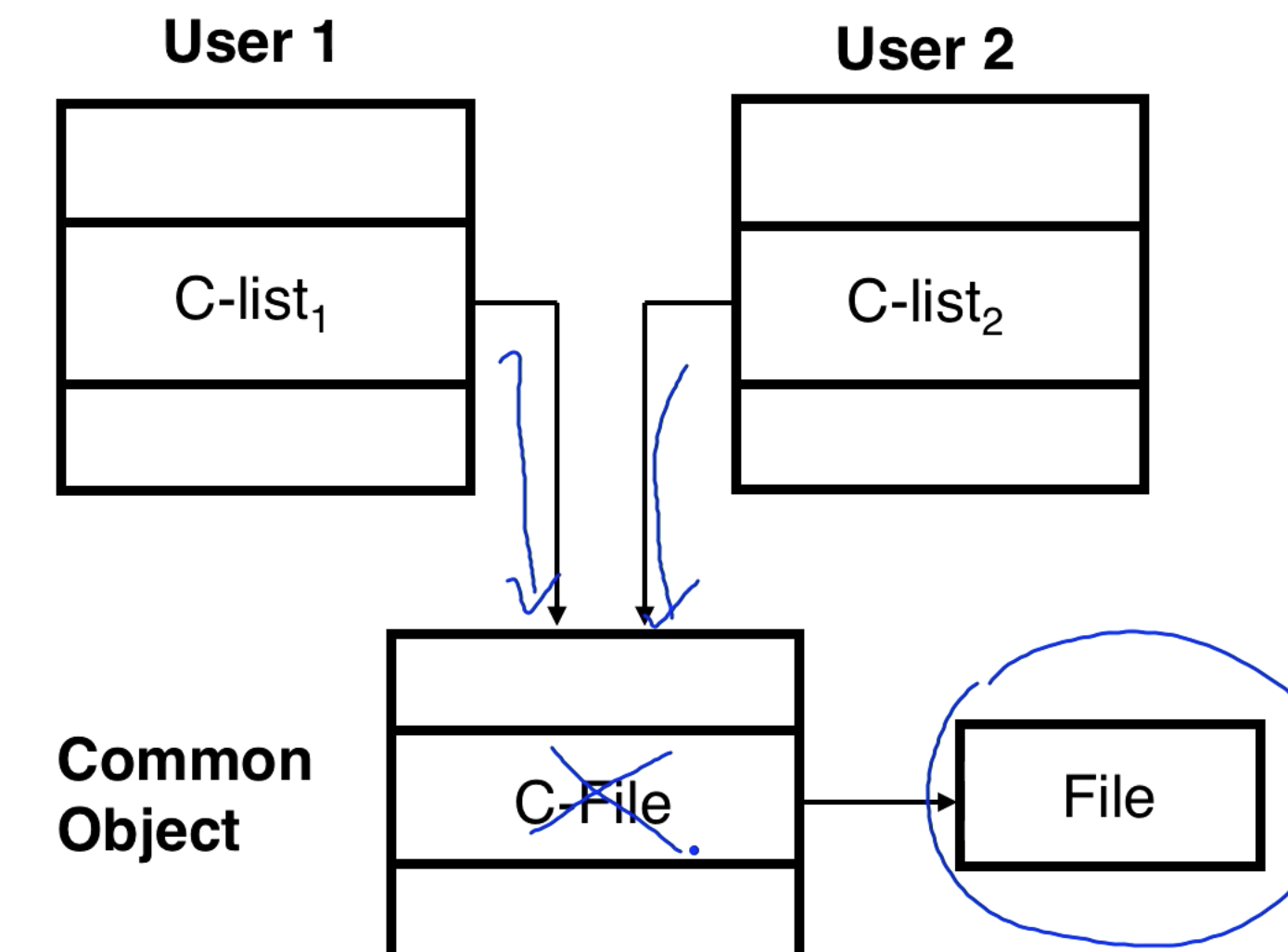 Also, you cannot take a capability from the common object and bring it into your own C-list. There are environment rights which say that a capability can't escape the container it lives in.

Sometimes two processes need to only share a subset of their capabilities because they don't fully trust each other. This is possible with C-lists and is a solution to the mutual suspicion problem.