There is an asymmetry in security, the attackers only need to find a single error but you need to prevent many. There are security best practices and design principles to help developers build secure systems.

Security exists outside the digital world. We have assets (i.e. jewelry) we need to protect from threats (i.e. burglars) using defenses (i.e. locks). The asset being secured might be the autonomy of people in a geographic region, in which case there is a military.

A military is more expensive than a lock and key that keeps jewelry safe. This gets us to the economics of security. We look at what you are securing and how its value relates to your (and your attacker's) budget. This is summarized in the diagram below. 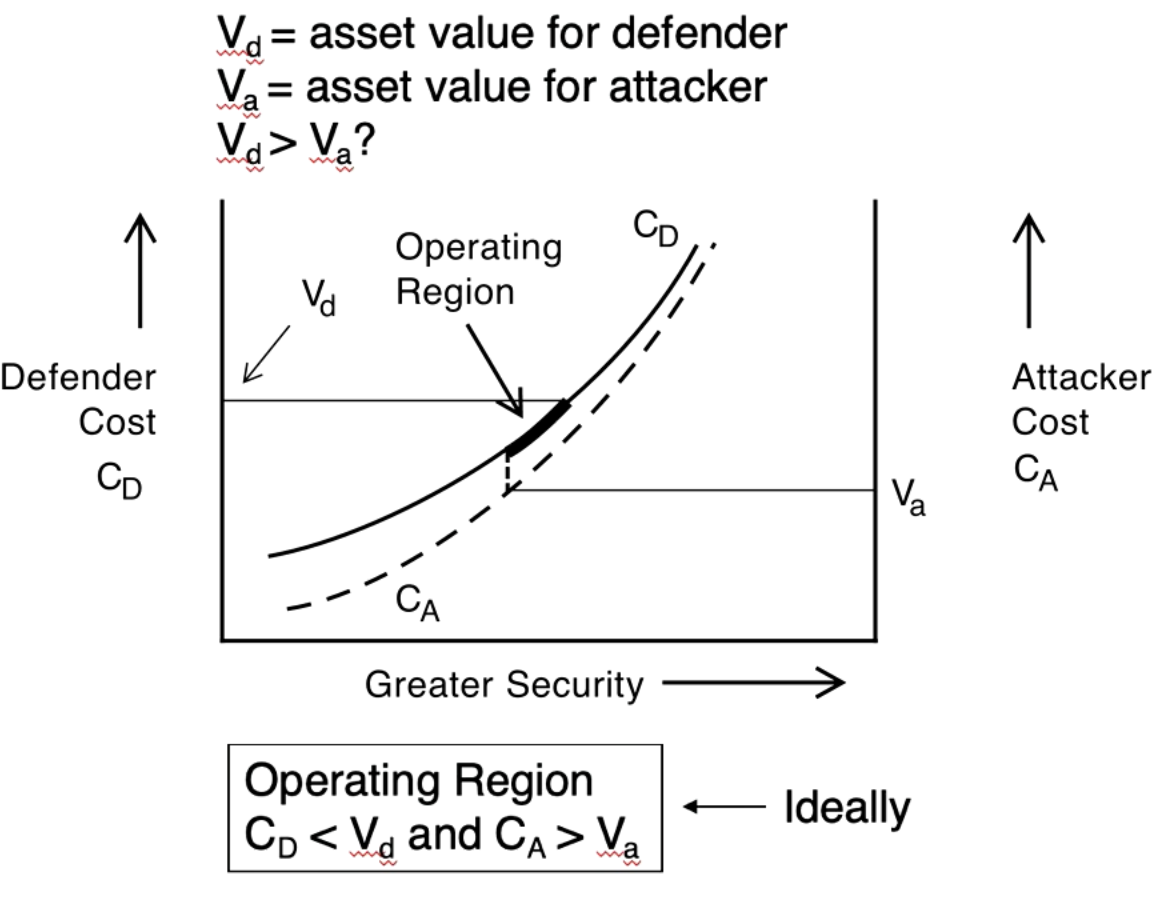 Cyber risk is defined as attack likelihood×attack impact. This is the expected value of the damage done by an attack. We reduce this value to one that we can live with, but this quantity is hard to calculate. There are differing opinions on the likelihood of an attack.

Both defenders and attackers must weigh their costs with what they have to gain by defending/attacking the protected asset.

Isn't it annoying to do 2-FA all the time now? It is easy to use the same password for all of your accounts, but it really isn't secure. Do you enjoy being forced to update your password from Password101! to Password102!? Security often gets in the way.

People are often the weakest link in a system and a system is only as good as its weakest link. Requiring people to cycle between a series of related passwords might not actually be a good idea from a usability or security perspective. Design systems that users can accept and that have reasonable expectations about user behavior.

Windows 10 is an operating system with about 50 million lines of code. How could that possibly be secure? Later in the course there is discussion of a hypervisor as a TCB instead of the OS itself. A hypervisor is less feature rich and can be implemented in mere hundreds of thousands of lines of code.

Users are authenticated (their identity is verified) and are only allowed to perform certain actions. A user doesn't have to be a person, applications are also considered users in the sense that they have their own privileges/permissions.

Think about how you have to give applications permissions to do things like look at your pictures on your phone. What would happen if applications had access to all of your photos by default? That sounds like a privacy/security problem.

Layered Defense or Defense in Depth

Defense in depth is having multiple diverse protection layers to protect against hackers.

For an example we return to Ken Thompson's Turing Award lecture and discuss a way of protecting ourself from the tricky bug he described.

The defense mechanism described provides an additional layer of security on top of the compiler. You can imagine adding more independent layers for other potential vulnerabilities.

Do we actually do this?

Do people actually follow these practices? Here are some cautionary tales from people that didn't follow best practices.

Often design principles are followed. Many enterprises have a firewall as well as an intrusion detection/prevention system. This is defense in layers.

In addition to prevention we need detection and response. There are analogous design principles for things like detection.

Don't spam your users with false positive security alerts, else they don't respond to the true positives. This is an example of user acceptability.

Don't just think about prevention. Think about the design principles in the context of detection and response as well.