Virtualization allows users to work with virtual resources, which are easier to use than physical resources.

Because the guest operating system takes care of the resource management, our system is less complex. Less complexity gives us more confidence that our system achieves correctness (economy of mechanism). 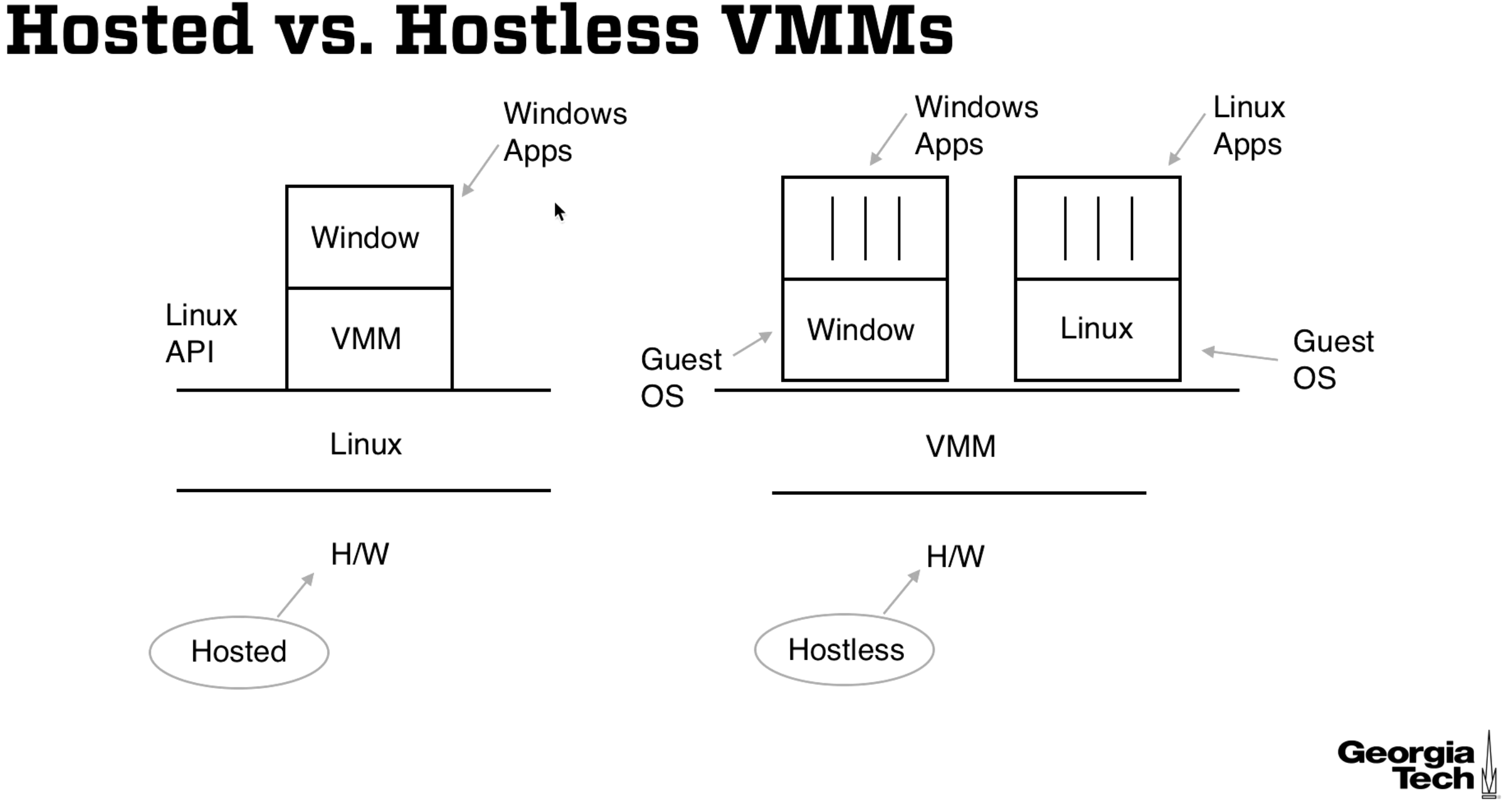 For the hosted VMM we have a virtual machine (like Virtualbox) that lets us run Windows on a Linux operating system.

For the hostless VMM we have the operating systems on top of the VMM.

Our focus throughout this module is on hostless VMMs.

Hostless VMM is the TCB

Hostless VMM's are smaller and more likely to be correct because the guest OS manages resources. Some popular hostless VMMs include -

If you want to run a potentially unsafe application you can run it in the red VM, and if you trust the VMM, the green VMM is isolated from the red VM. 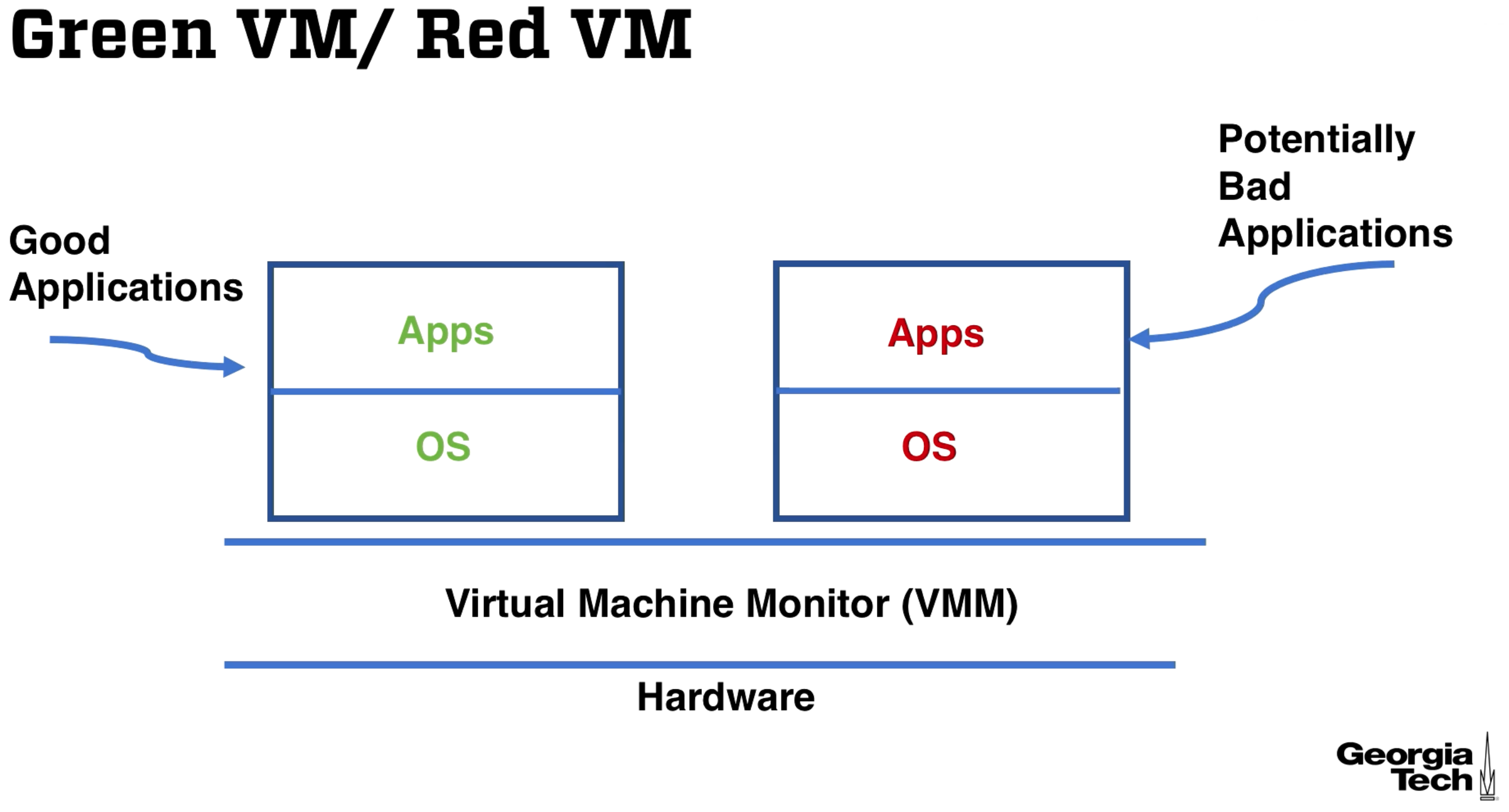 Some older hardware like the Intel Pentium simply couldn't be virtualized because of sensitive instructions that were not privileged. This led to the introduction of Virtualization technology (VT-x).

With virtualization the VMM must be the most privileged. This means that it is running in ring 0. But the OS wants to run in ring 0!

The VMX non-root will restrict access to some registers and privileged instructions even when the guest OS is in ring 0. Some new instructions were added for root mode as well.

Control is transferred from VMM to VM via VMEntry (which is called from VMLaunch in the below diagram) and from the VM to the VMM via VMExit. Although VMX Root has 4 rings, it only uses ring 0, which we call -1. Confusing, right? The OS gets to have a proper ring 0 and no modifications are necessary, allowing for full virtualization. 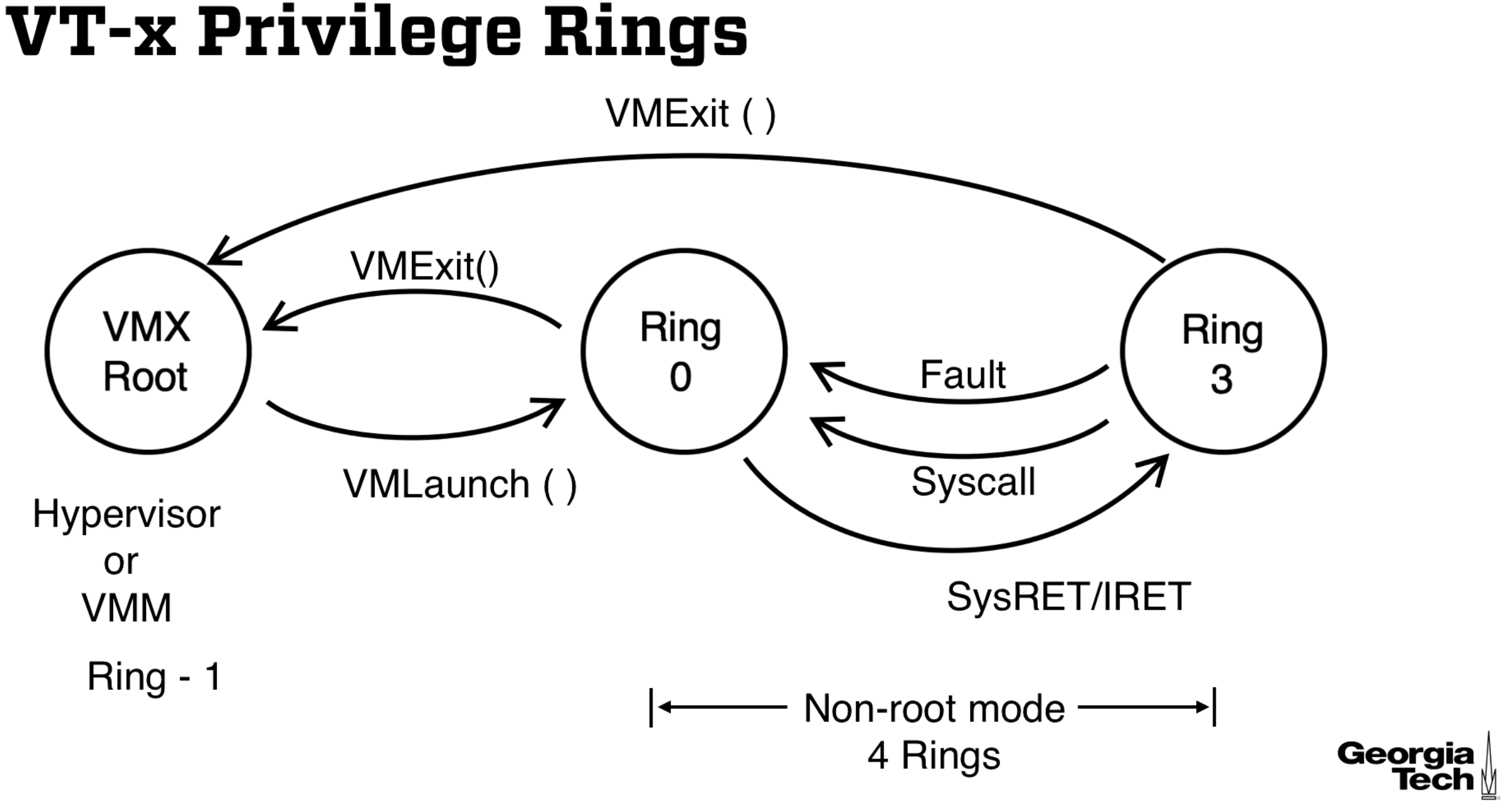 The OS likes to manage the logical to physical address mappings, but in this case the OS is a guest OS and it does not have control of physical memory. 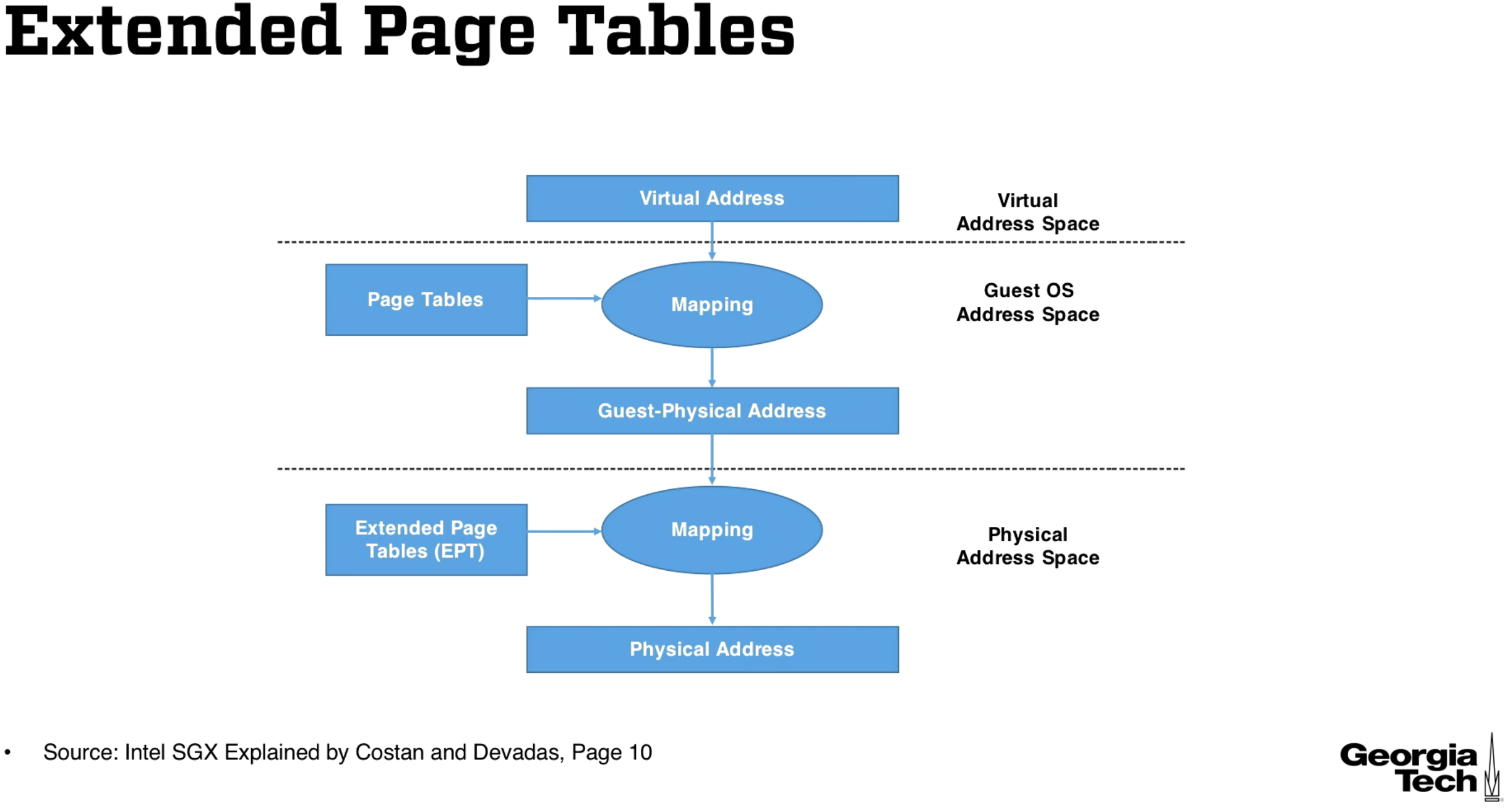 The columns are last module's mapping from logical to physical addresses in 64 bit architectures. So are the top and bottom rows. Basically whenever we want to get an address for the next stage in the translation process, we must get this address from the physical memory and go through the extended page table's translation process. 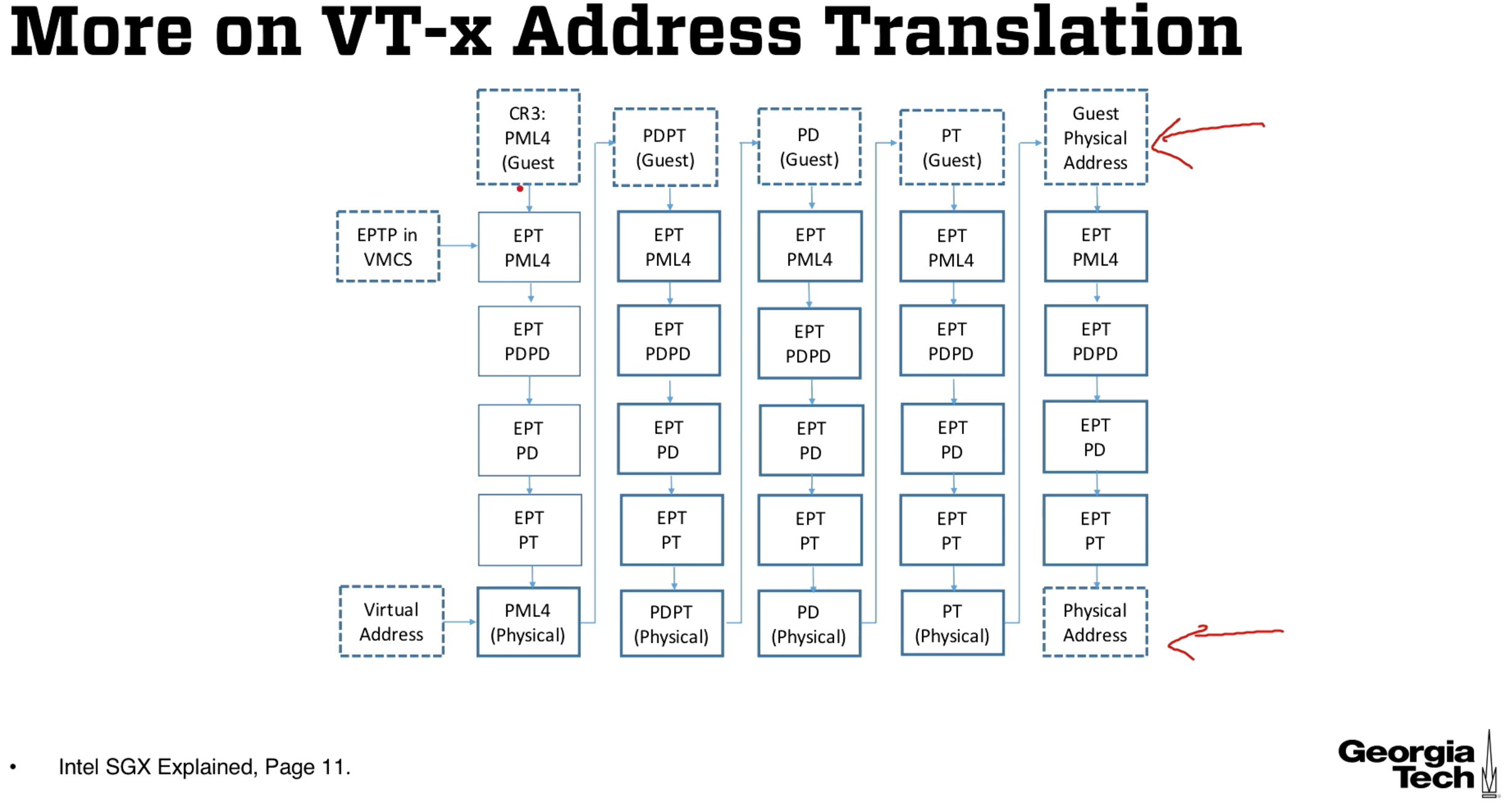 If you don't trust the VMM, Intel produced Software Guard Extensions (SGX). SGX lets you make a region of addresses into an enclave which is protected from the VMM, guest OS, and applications outside of the enclave.

The VMM is less complex and less prone to attacks, but is not immune to attacks. You can see this in the National Vulnerability Database.

Xen VMM has a VM that controls other VMs called dom 0. This VM is part of the TCB, but isn't doing anything like running user applications.

You might use virtualization to set up a test environment for determining if an untrusted application is malware. The malware might try to evade detection by only running if it thinks it is not on a virtual machine. If our VMM achieves total transparency then the virus cannot tell it is on a VM.