With distributed systems we might have a server communicating with a user over an open network. An adversary might see this traffic and could maybe modify it.

The user/principal is on the client host and is communicating on an open network with the service host. The service host has protected resources that are protected by the TCB.

A user does not directly request a resource R from the TCB on the server machine. Instead of directly making the request, the request comes through a communication channel.

We look at both the theory and practice of authentication and authorization in distributed systems.

Example: Entities Involved in a Request

A user might be using an accounting app that needs to read a file from a file service on a server, below is a diagram. 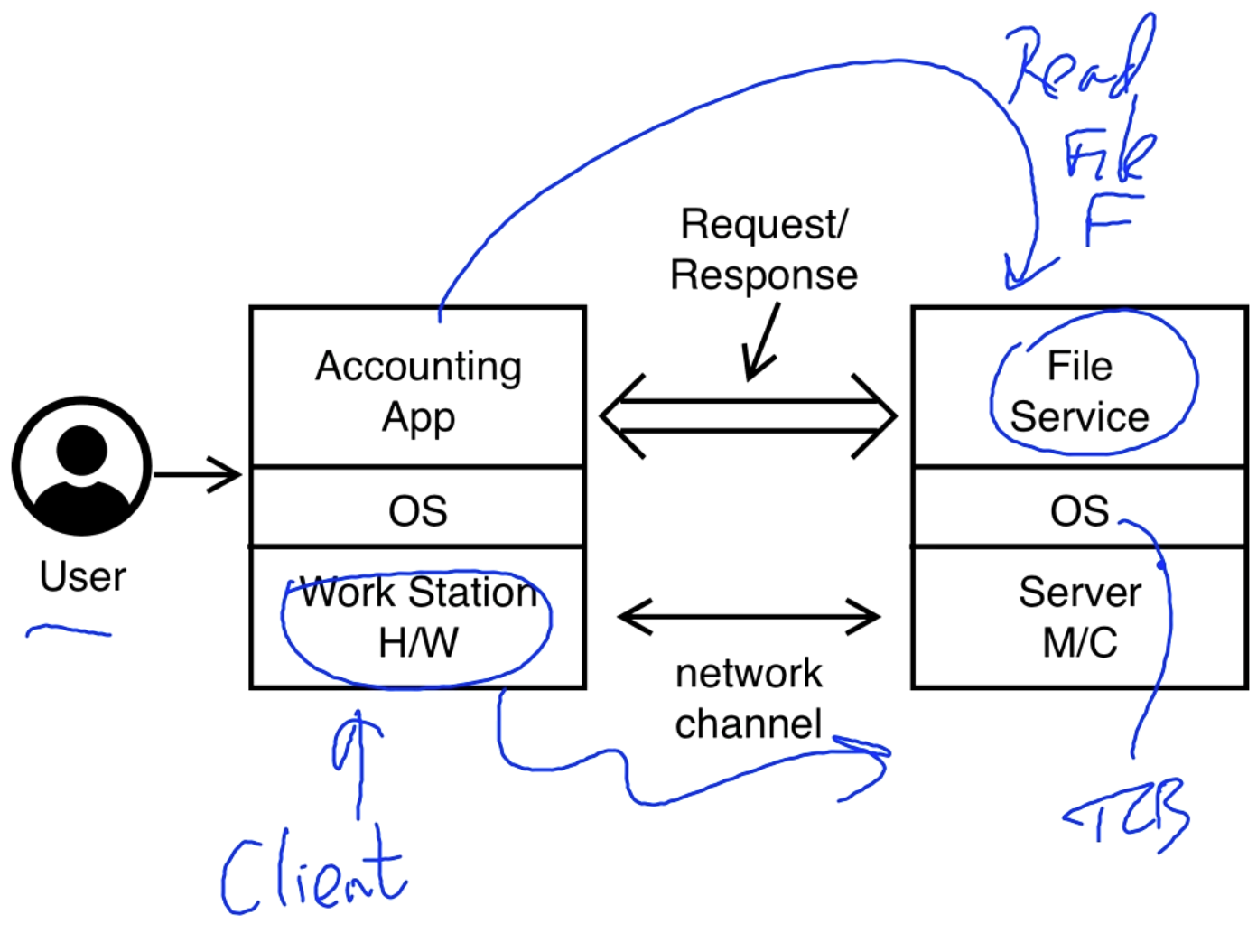 Here are some relevant questions from the server's perspective:

from the client's perspective:

Note: Other than the stated assumptions, we need to build everything else in a demonstrably trusted manner.

Principals can be either simple or compound

Principals make statements to request access, grant access, or to define policy. In a distributed system all requests happen over channels, so channels are the only principals able to directly make a request.

We can also combine principals, if A and B are principals then A⟹B (A speaks for B) is a statement.

Statements define a language. Requests, policies, and all security relevant actions are made in this language. The operators for statements are as given here. In particular, there is no not symbol. not causes problems.

What Statements are Valid?

I'm going through this rather quickly, you might want to read the sections in the paper a couple of times - Dr. Mustaque Ahamad

Some statements are true by definition. We call these axioms. To say that a statement s is true, we put double quotes before it. ′′s=s is true.

If s is an axiom, ′′s because we assume the truth of the axiom. There are things called theorems that can be proven from axioms. If s is a theorem ′′s because it follows from the axioms. 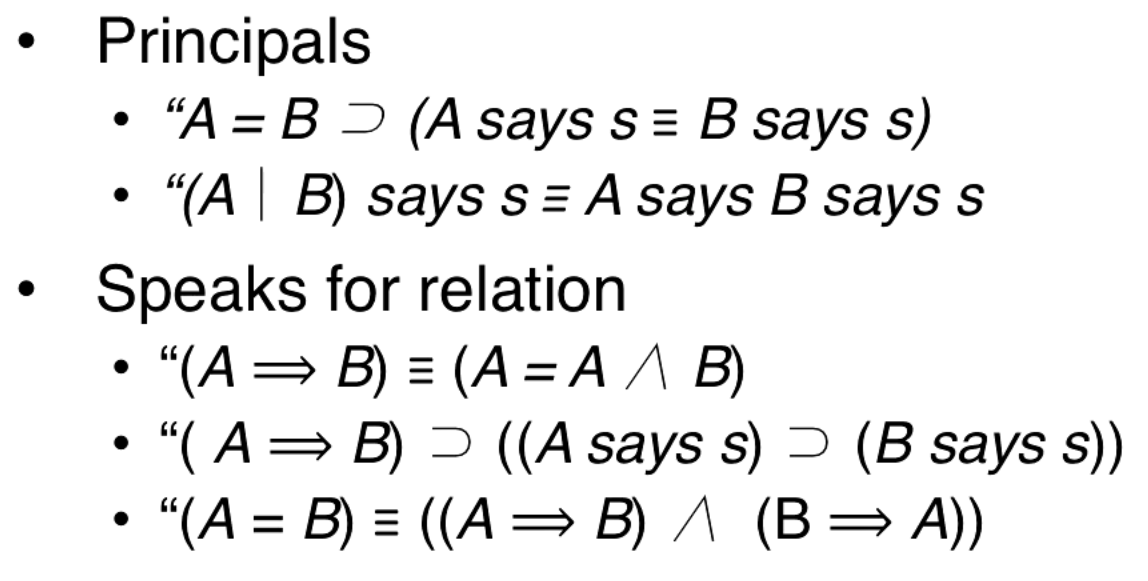 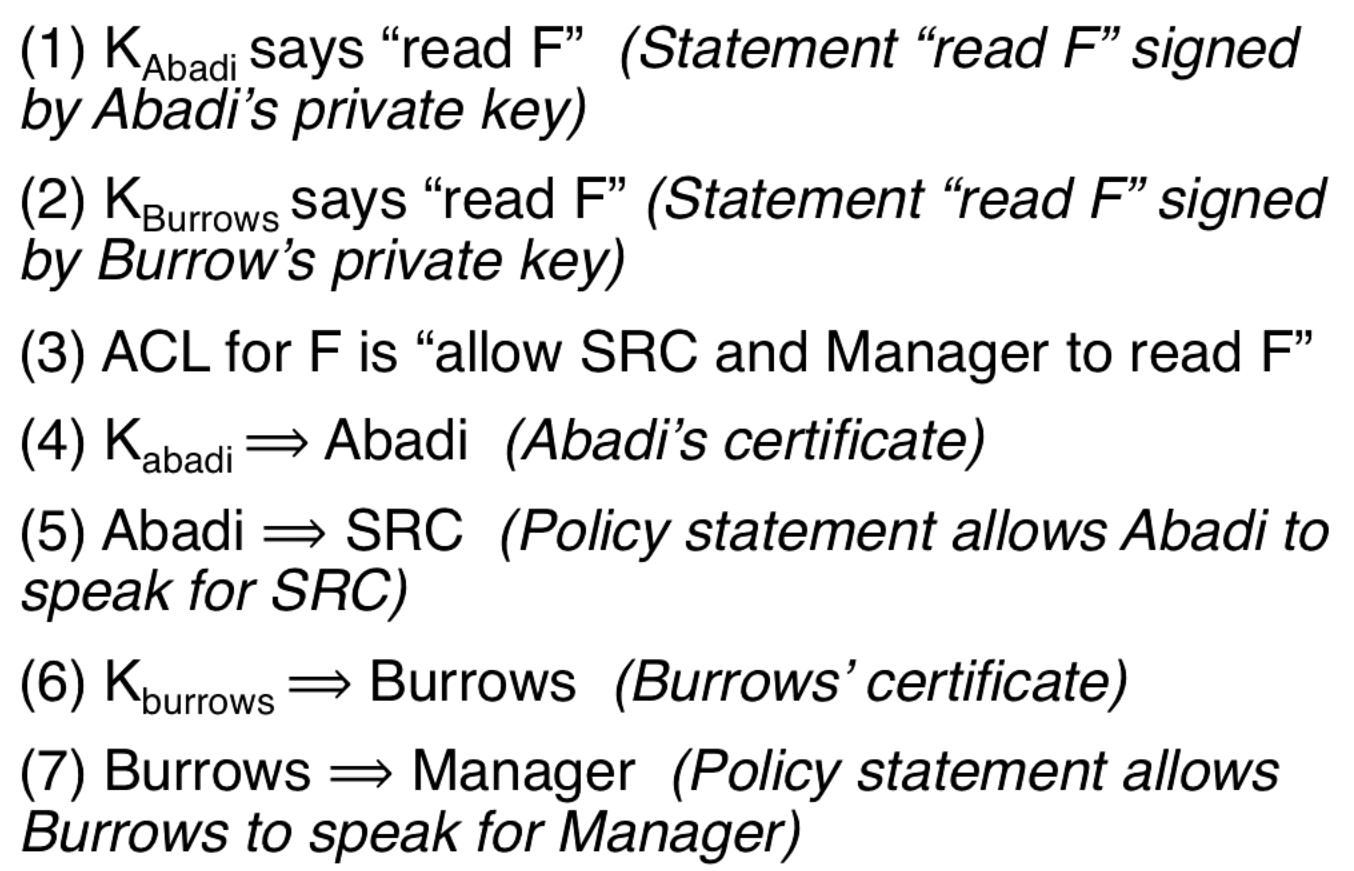 This next picture is confusing, I'll try to explain after you look at it.

We have keys that say stuff but we need to have SRC and Manager saying it.

In the paper and in the lecture they make this next step by saying it follows from monotonicity. Not very rigorous, but maybe the proof is obvious (not to me).

That is how we get step 10. Step 11 is more self-explanatory. And the whole point is that A⟹B is true, so what it implies is true, which is another implication, which ends up implying that SRC ∧ Manager says to read the file.

In distributed systems there is a network we have to communicate over.

For a communication channel to be secure we must have the following:

To authenticate C we must find the principal A such that C ⟹ A (C speaks for A). We can do this by having A or someone who speaks for A say "A says C ⟹ A".

From this it is true that C⟹Bob. This works because (KBob​⟹Bob)⊃(KBob​ says s⊃Bob says s). Then we substitute Bob in for KBob​ to get Bob says (C ⟹ Bob), which from the hand-off axiom makes it so that C ⟹ Bob. ' 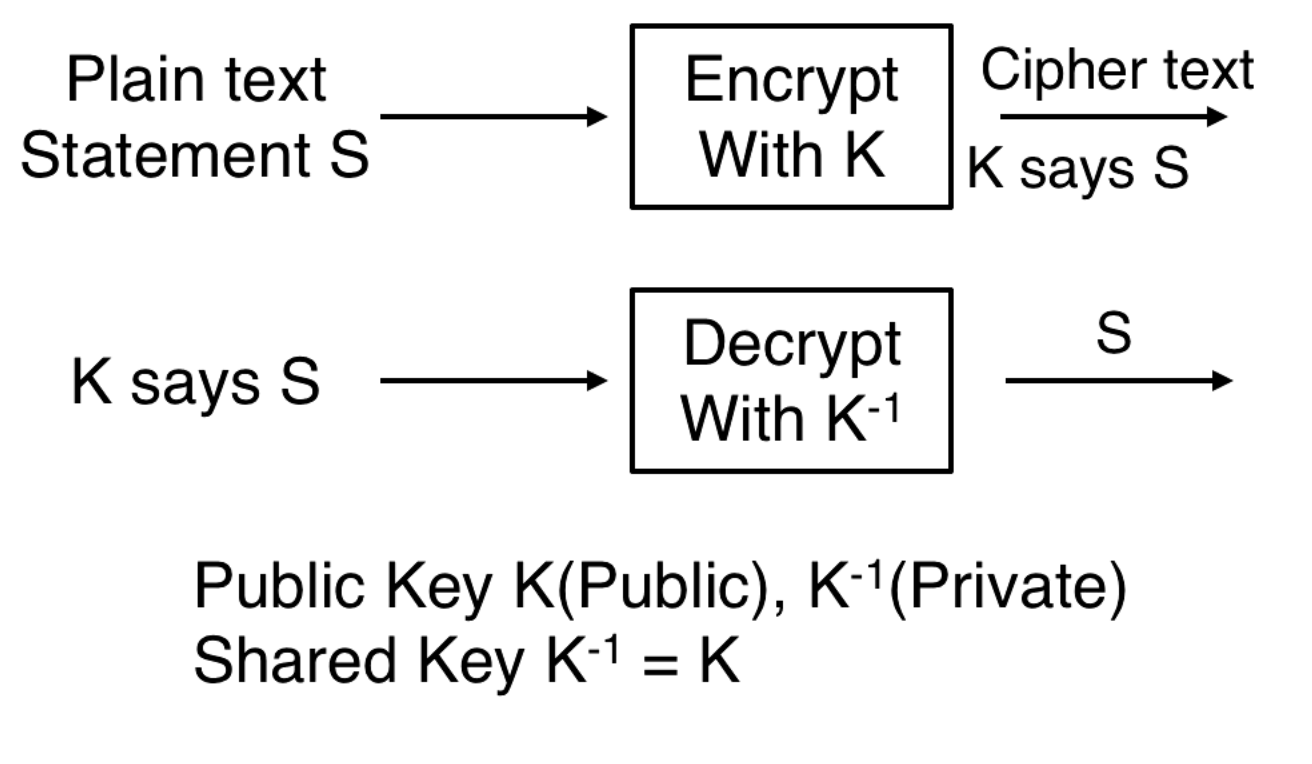 We must generate a key K and share it with A and B. Messages are sent from A to B, the message includes B's identifier for K so that B knows what key to use. The keys are shared with a key exchange protocol.

The protocol is for setting up a authenticated secret channel between two parties. For the authentication, we assume each endpoint has a public/private key pair. With this assumption, each party can generate a random key, send it to the other by encrypting with its public key and then use the two random keys (one it generates and one it receives from the other party) to generate the channel key. There are few other details like key identifiers etc. which are needed to implement it. - Prof. Mustaque

I don't recognize this as Diffie-Hellman, in Diffie-Hellman we would combine Ka−1​ with Kb​ to get our shared key? If you can clarify please submit a PR.

Secure Messages from A to B

We want the statement A says s, but we have to say this securely. This is why we did the key exchange so that the following is true -

We need a trusted entity that can define relationships between keys and users, like associating Ka​ with the user Abadi. This trusted entity is called the certificate authority (CA). To say that the CA is trusted is to say that CA⟹All Principals. 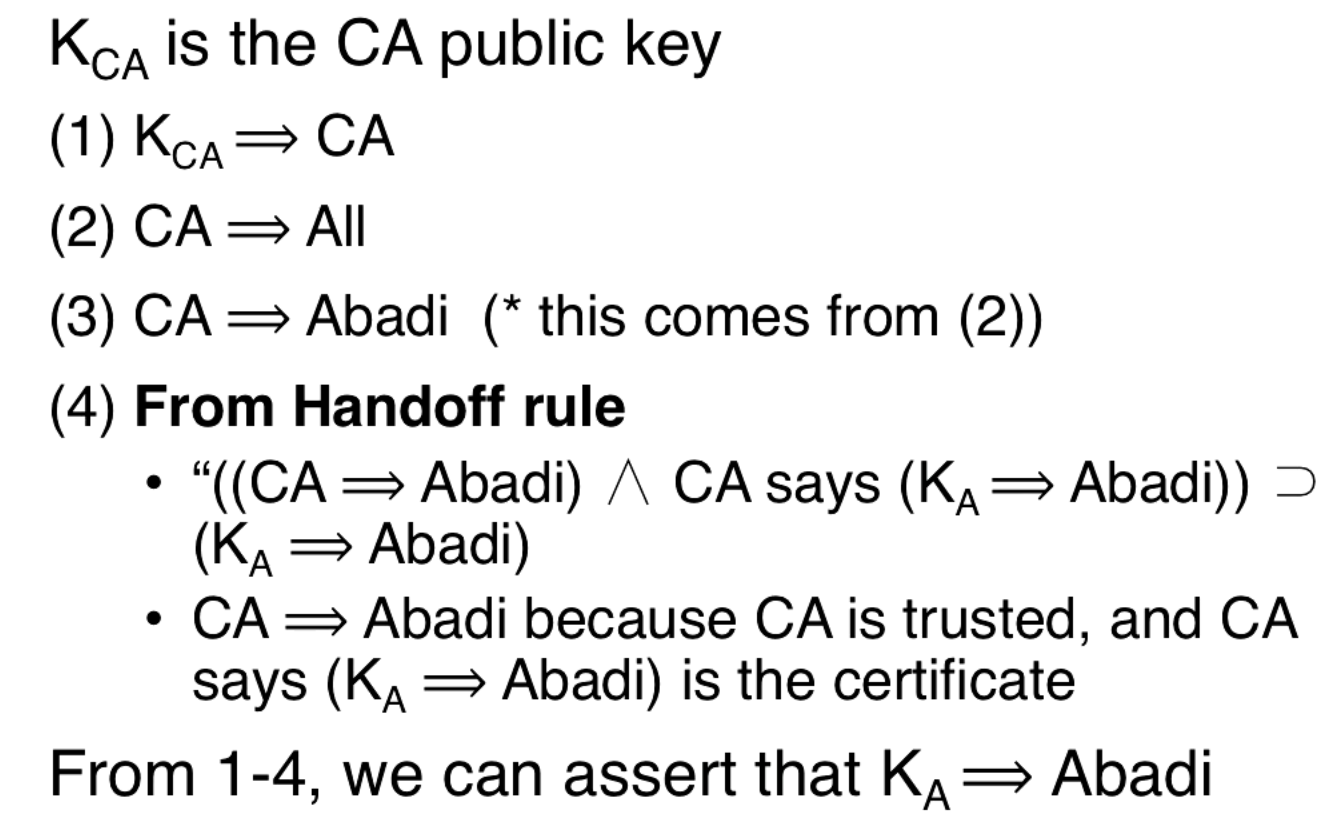 The CA issues statements about what keys speak for who and signs them with its private key. These statements are verified by users using the public key of the CA.

CAs are mostly offline. The CA's private key signs all the statements about what keys speak for who. This makes the CA an attractive target for hackers that would like to sign statements as the CA. We can minimize the risk to the CA by minimizing it's connectivity (i.e. it is offline).

Certificates can be revokes for a number of reasons, like if a user's private key gets leaked or if there is an expiration date.

We can keep the CA offline and have an online agent that tracks which certificates are revoked. When we get a statement signed by a CA we can check if the certificate has been revoked.

A single CA for the entire internet is problematic. We can have hierarchical CAs. So CAB​ is the root CA of B. A trusts CAB​ but not CAn​ which signs the certificate of B. So CAB​ is used in a chain of trust that goes down to B and will end up signing the statement that is sent to A. The details are discussed in the paper but this is the depth discussed in the lecture. 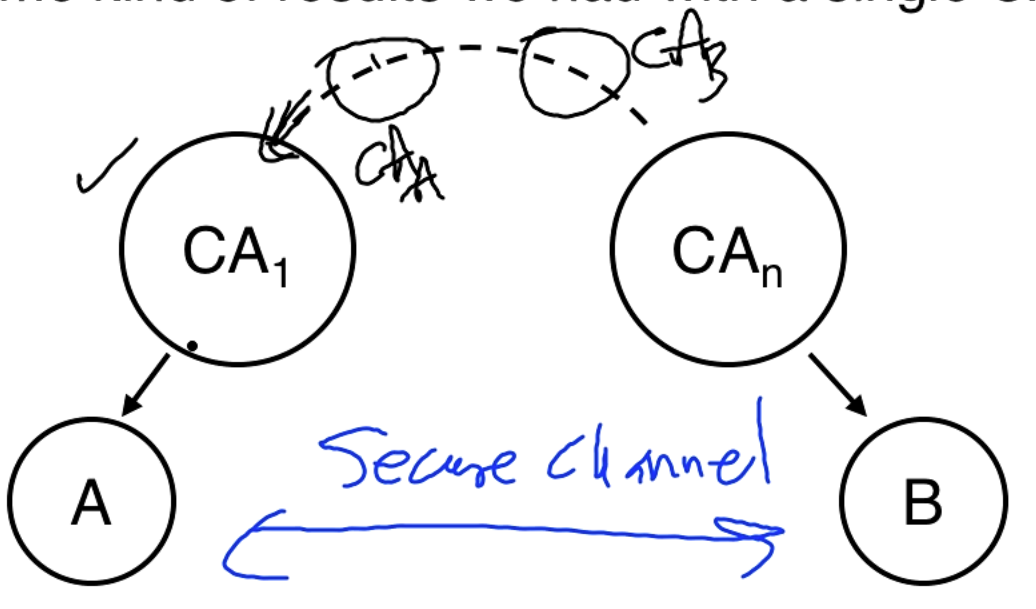