DAC has some problems which MAC tries to address.

The information flow control problem is if we share sensitive data with a person how do we prevent them from sharing that data with others. If Alice shares data with Bob, he can read the file and copy it to a new file with different permissions.

In DAC the user sets permissions. In some corporate environments the company might want to set the permissions, not the creator of the resource. This is relevant in military applications.

How can the TCB Support MAC

We need metadata/labels on our objects to support MAC. This metadata describes the nature of the data and how we can share it.

Types of information stored in metadata -

The first fundamental difference between MAC and DAC is that the MAC requires labels. These labels are a combination of a sensitivity level and a compartment. The compartment says what topics the data is related to.

How are labels used?

We might have label L1 = (l1, c1) where l1 is the level (how sensitive) and c1 is the compartment (what topics). The compartment is usually a set of topics (Weapons, Cthulhu, Antarctica)

Labels have a partial ordering, not a total ordering. In a total ordering things are either less than, greater than, or equal. The real numbers have a total order. Some labels cannot be compared in this way, but these relationships do exist between other labels.

It is possible that L2 has something in its compartment not in L1, but has a lower level. In this case we cannot compare them, they are not comparable.

The Least Upper Bound (LUB) of labels L1, L2, is the smallest label that dominates both L1 and L2.

The Greatest Lower Bound (GLB) of labels L1, L2, is the largest label that is dominated by both L1 and L2. 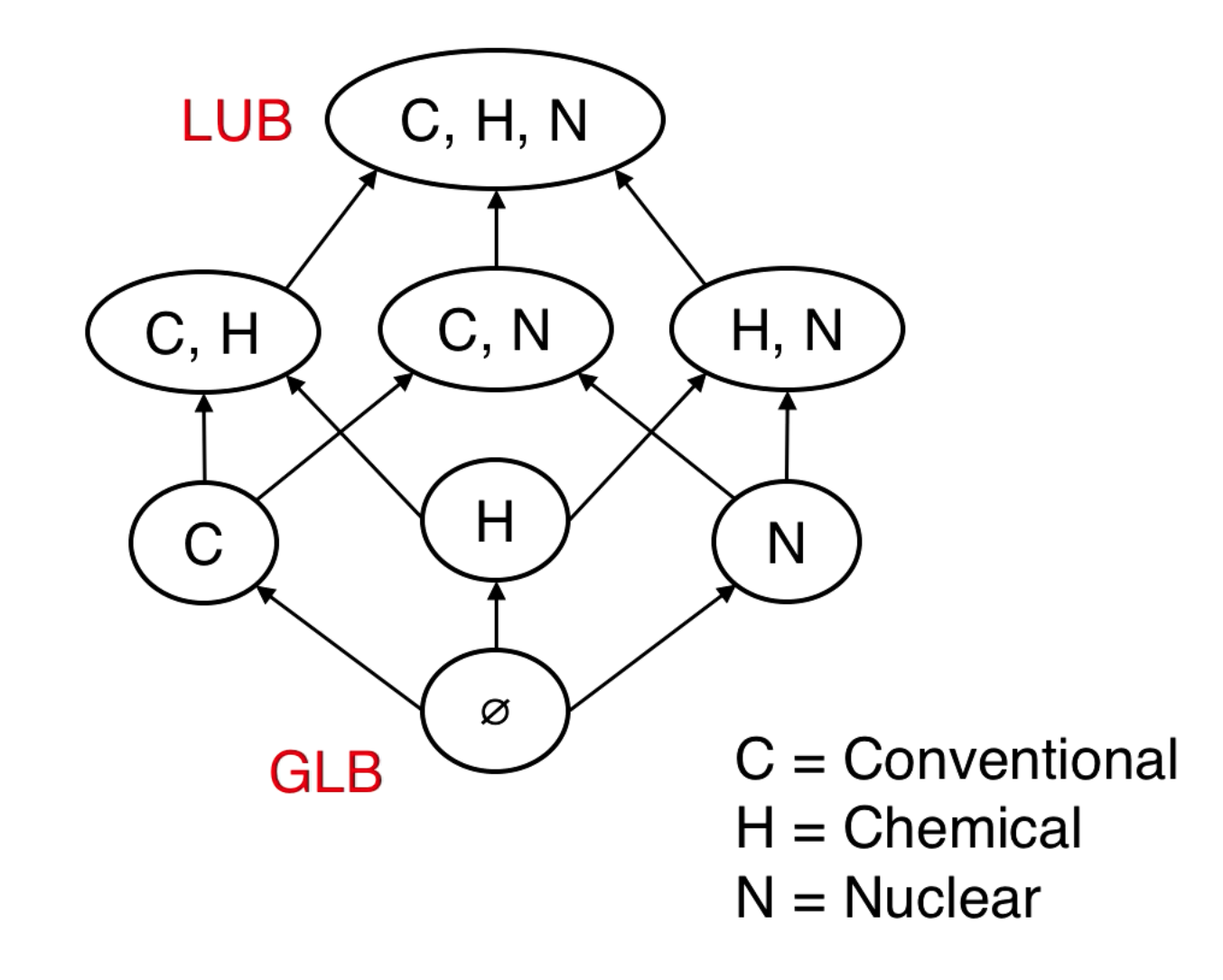 The BLP model is the Bell and La Padula Model, developed by DOD funded research in the 1970s. It is also called Multi-Level Security (MLS).

Read down rule (or simple security) - A subject S can read an object O if the label of S (their clearance) dominates the label of O (its classification). This means that your sensitivty level must be greater than or equal the sensitivity level of the object, as well as your categories must be a superset. Categories being a superset is called need to know, if you don't have access to nuclear stuff you can't read nuclear stuff, you don't need to know.

Write up rule (or * property) - A subject S can only write to an object O if O dominates S. This means a person with secret clearance can write into a top secret document (or a secret document!), but can't write to a confidential document.

The TCB checks the labels and enforces the rules. 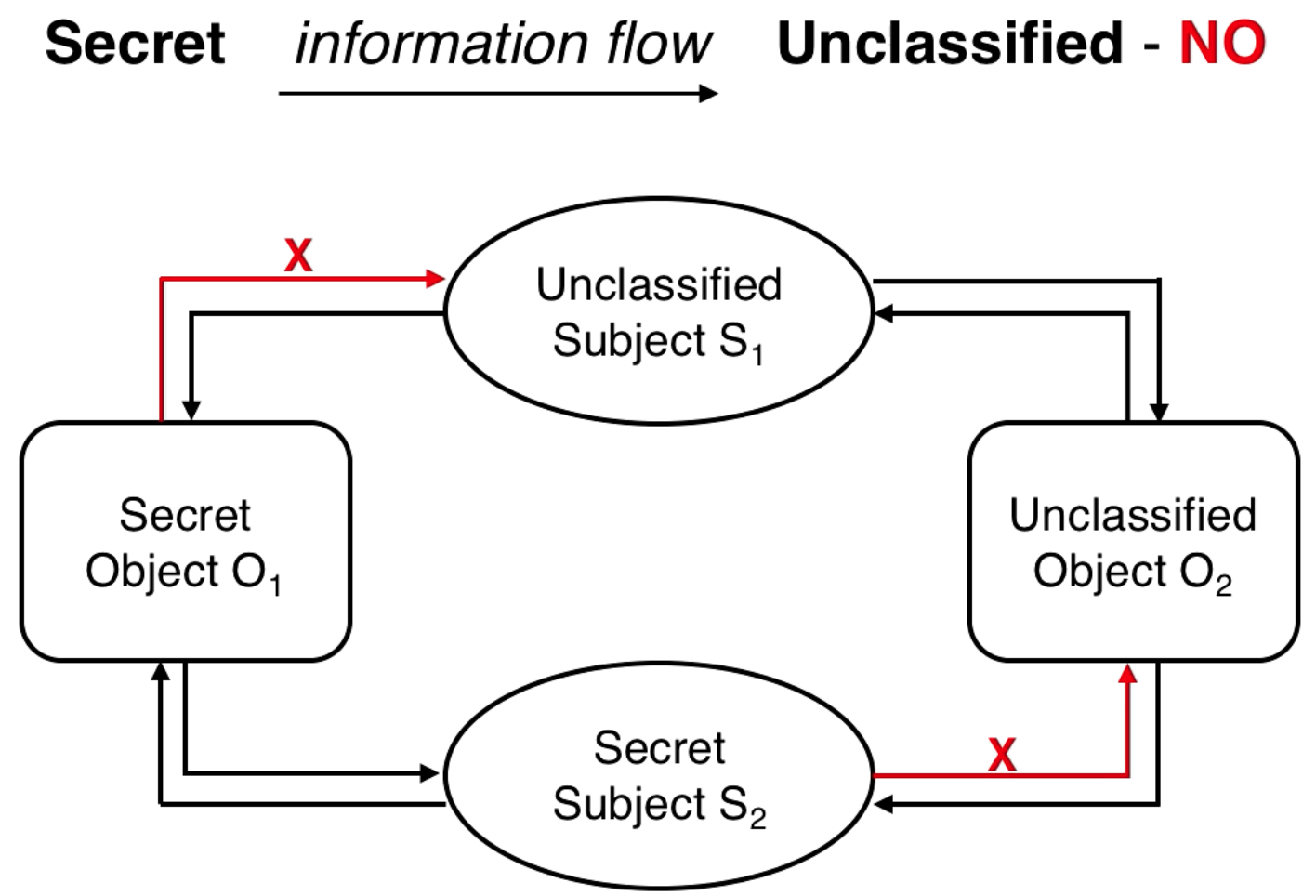 Previously we discussed how Alice can share something with Bob who can then share it with someone who shouldn't have it. Since you can never share to a lower clearance level (write up), then this can never happen.

The simple and star properties (a.k.a. read down, write up) are satisfied if and only if

When is a system call allowed

The state of a system S can change. There are system calls like get_access(), release_access(), read(), write(), grant(), revoke(), etc. Calls are allowed when they follow the following rules.

The BLP model only lets you write up and read down. This is good for confidentiality but not good for integrity. The Biba model is the opposite, read up and write down. Its focus is integrity and not confidentiality.

The focus is on protecting from unauthorized modification of object.

The purpose is to stop low quality information flowing to high level users.

Other types of flow problems

Information flow starts with sensitive data. We track reads and writes to see where the information can end up. We want to track and prevent information from exiting to places it shouldn't exit to.

BLP works in DoD/intelligence settings where there are clearances and classifications, but most companies aren't set up this way. MAC is still important in companies because they are trying to limit how certain information gets shared.

Although there aren't clearances there are still roles. Devlopers, managers, QA, etc.

The policies we examine are

With RBAC a session is assigned to a user and users are assigned to roles and the roles have permissions.

There is a policy that says what roles can be activated for a user.

This product is called the Cartesian product. A×B is the set of all pairs (a, b) where a∈A,b∈B.

The roles for a session s are given by

There are three services

Again, roles are associated with a specific job function and groups are related users.

Without RBAC the ACM is a sparse matrix of size ∣U∣⋅∣O∣.

If all permissions are assigned through RBAC then we use the previously discussed Permission Assignment (PA) and the User role Assignment (UA). So the size of the policy file is the sum of the size of PA and UA. This is -

If the number of roles is relatively small, then

and the policy file is smaller than the ACM without RBAC. Small is simple, simple is better.

In many commercial settings the users are not developers that are writing code to directly interact with systems, instead they are working with applications.

There is a certain order things should happen in. The receiving agent should have an order receipt before they receive the supplies. Accounts payable must receive proof of delivery before issuing the check.

Clark-Wilson lets you have a policy that states what functions cannot be performed by the same user.

We can implement parts of CW with Unix like mechanisms (ACLs, user and groups, setuid). The idea is that we give users access to execute certain programs. setuid allows the program to run with its own permissions by changing the effective uid. This way users have access to programs and programs have access to constrained data items (CDi).

Other parts of CW involving statefulness are harder to implement. The instructor encourages you to think of how to implement such things.

The small squares inside the box for Coca Cola are documents. The box containing Coca Cola and Pepsi is a conflicting group, indicating that there is conflict of interest. 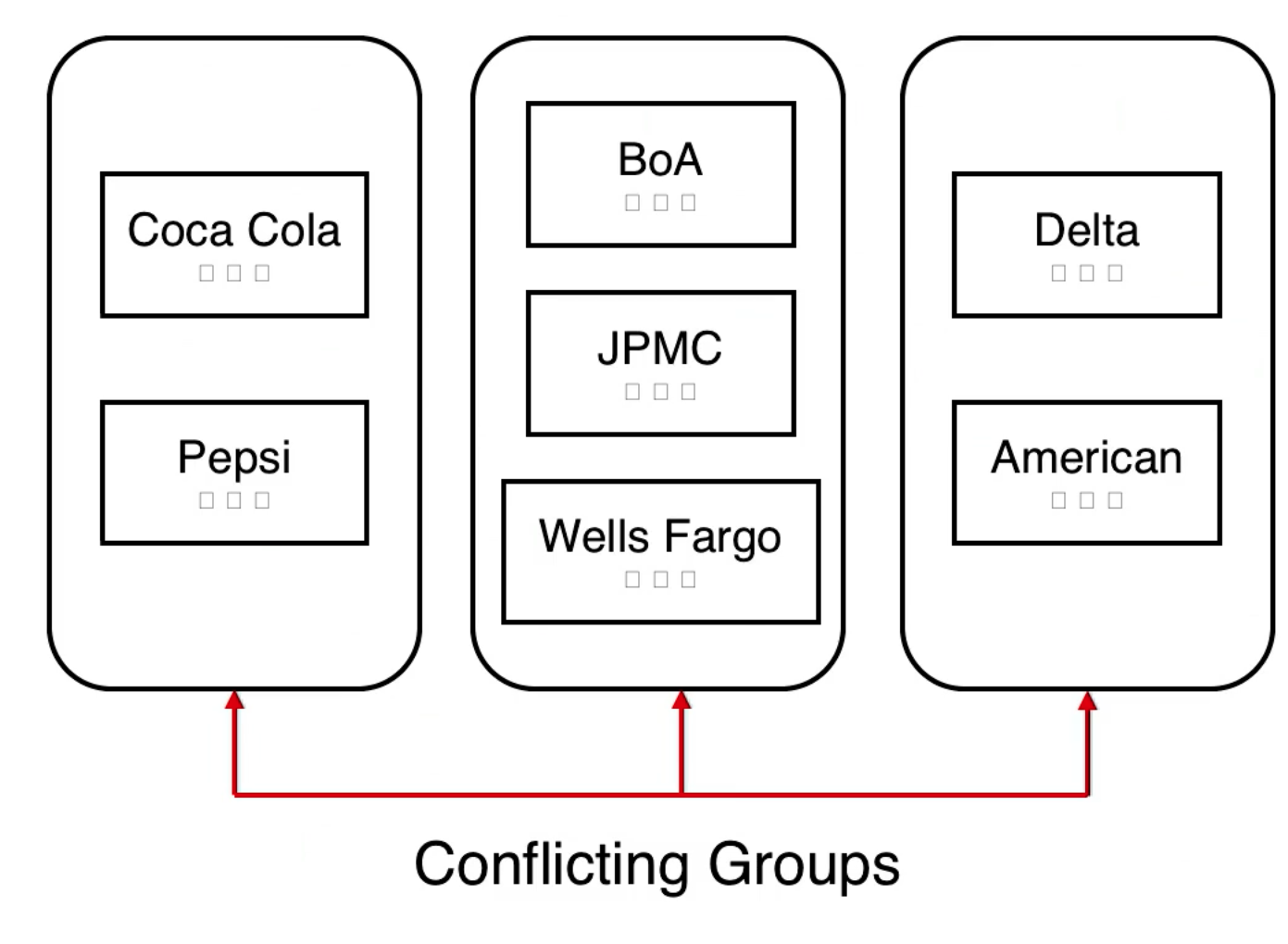 A user U can access an object O belonging to company C as long as U has not accessed an object from another company in C's conflicting group.

We need to implement these things by associating objects with companies and specifying conflict groups between the companies.

What policies address what needs?

Biba lets you read up to higher integrity data, and write down. It addresses integrity.

If we do BLP + Biba then we get both confidentiality and integrity, but we are stuck reading and writing at one level.

RBAC enforces both read and write so it addresses both.

Clark-Wilson controls access to applications that are writing to data, it is concerned with integrity.

Chinese Wall worries about reading and disclosing data, which is confidentiality. 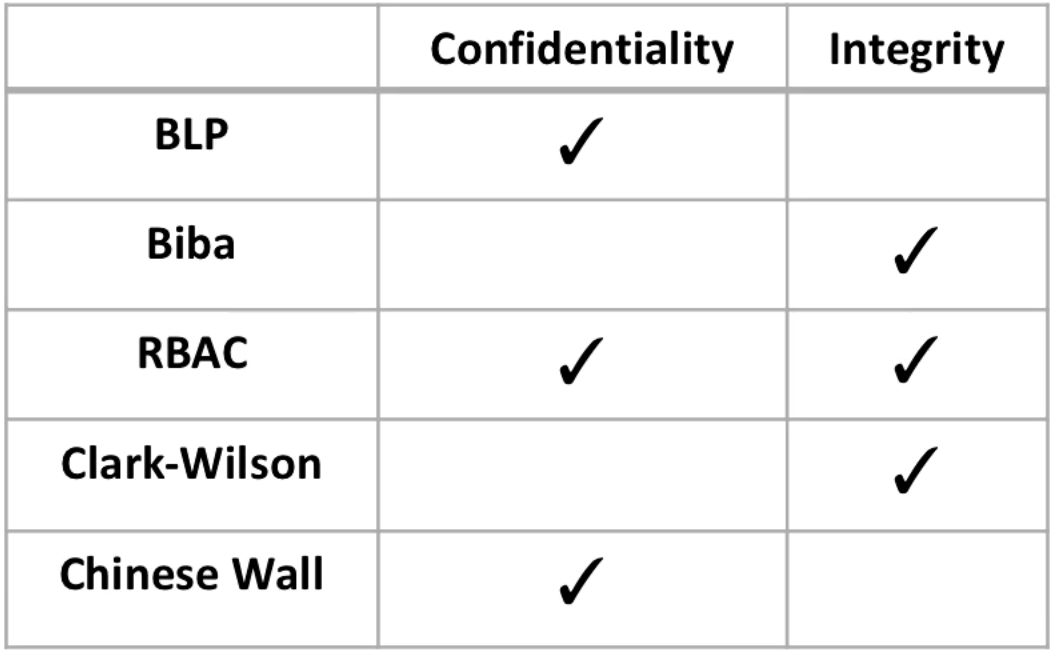