To represent threads, pthreads supports a pthread_t data type. Variables of this type will be uniquely identified by an identifier and will describe a thread.

Threads are created by the following function

This function takes as arguments a pointer to a pthread_t, as well as a start routine and an argument to pass to that start routine.

It also takes an argument which is of the type pthread_attr_t which is a data structure that can be used to set various options on the thread during creation.

pthread_create returns an int which indicates whether the creation was a success or a failure.

Child threads can be joined back to a parent thread with

pthread_join returns an int which indicates whether the join was a success or a failure.

The pthread_attr_t data structure allows us to define features of the new thread we are creating, such as:

If NULL is passed in the place of a pthread_attr_t, pthreads falls back to default behavior for the new thread.

One mechanism not considered by Birrell is detachable threads. In pthreads, the default behavior for thread creation is joinable threads. For a joinable (child) thread, the parent will not terminate until the child has completed their execution. If the parent thread exits early, the child threads may turn into zombies.

To detach threads, use

Since parent threads do not need to wait around until child threads complete, they can simply exit with pthread_exit.

Example of creating a new thread with custom options: 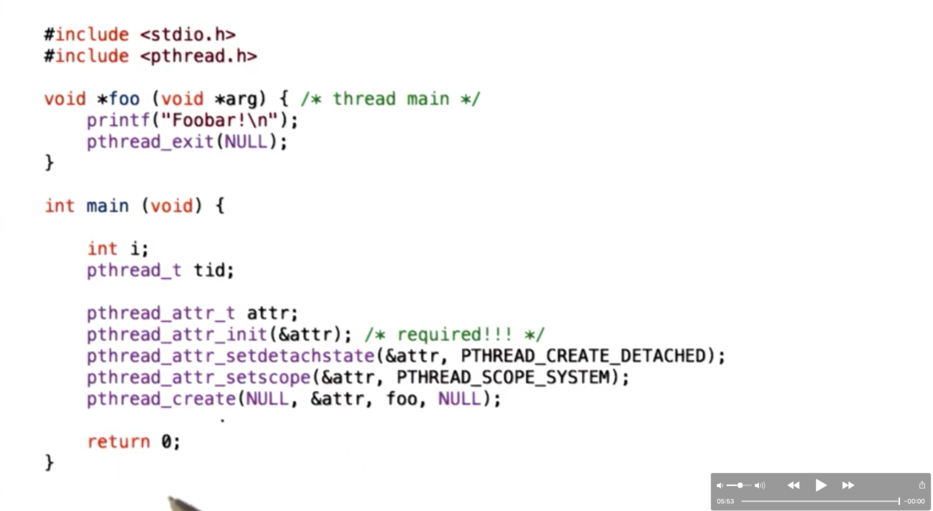 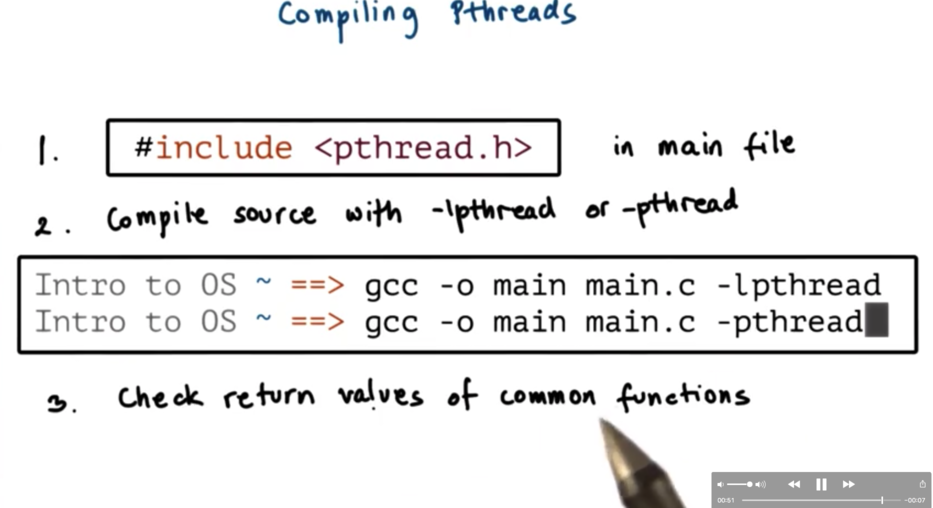 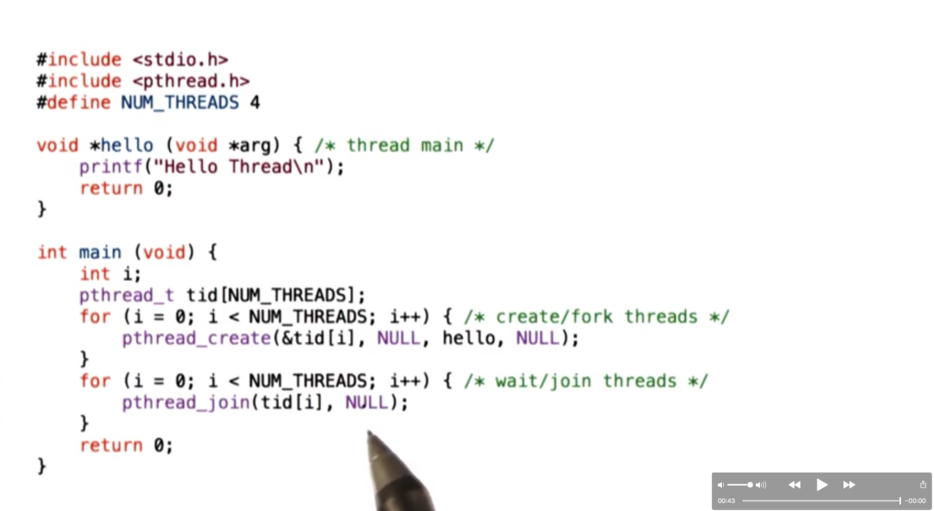 We loop and create threads with pthread_create passing in hello as the start routine. Since this function takes no arguments we pass NULL as the fourth argument to the function. Also, since we do not need any custom behavior, we pass NULL as the second argument. After we create the threads we must join them all back in. 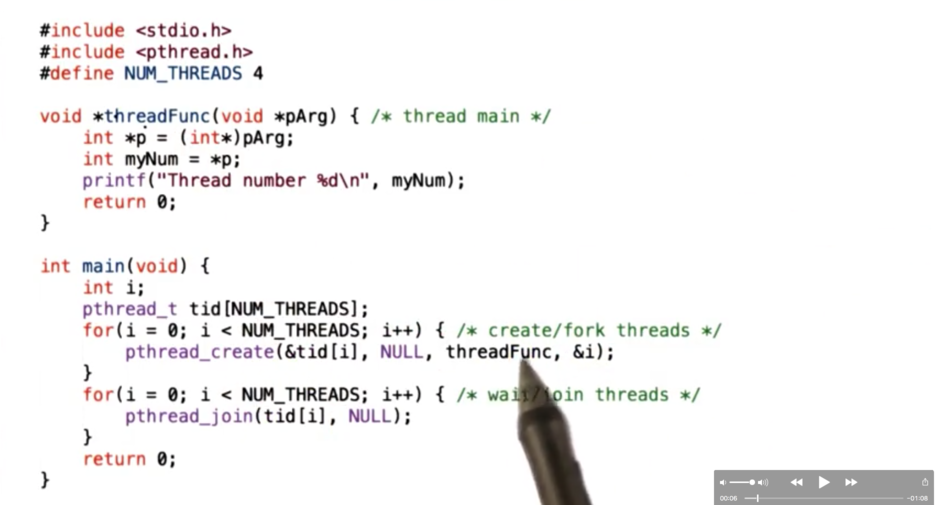 In this case, the call to pthread_create passes in a value for the final parameter (the argument to pass to the start routine). This value is the pointer to current value of i the loop counter. In threadFunc, the pointer is first cast to an integer pointer, before a local variable is assigned to the value the pointer points to. Finally, the value is printed out.

The variable i that is used in thread creation in the example above is a globally visible variable that is defined in main. When its value changes in one thread, all the other threads will see the new value.

In this particular case, the second thread that is created with pthread_create is created when i == 1. In the thread function, p will become equivalent to the address of i and myNum will take on the value of i, which is presumably 1.

However, it is possible that before this thread had the chance to cast the pointer and define a local variable pointing to the pointer's value, the main thread went into the next iteration of the for loop and incremented i, making i now 2. Since we pass the address of i to the start routine, p will still point to the address of i, but myNum will point to the (new) value of i, which is 2.

We call the above situation a data race or race condition. In summary, these terms refers to situations in which one thread tries to read a value that another thread is modifying.

To correct the problem, we must first initialize an array tNum that contains as many elements as we have threads. One each iteration of the for loop, we can set the index of tNum at i to i. We can then pass the address of tNum[i] to the call to pthread_create. This way we can increment i, while ensuring that the value of i that a thread needs to see does not change. We accomplish by copying the value of i over to this private storage that we do not modify.

To deal with the mutual exclusion problem, pthreads supports mutexes. Mutual exclusion ensures that threads access shared state in a controlled manner, such that only thread at a time can apply modifications or otherwise access that shared variable.

In pthreads, the mutex data structure is represented via a pthread_mutex_t type.

In pthreads, there is no implicit unlock: both lock and unlock must be explicitly called.

Whatever code appears between these two statements will correspond to the critical section.

Mutexes must be explicitly initialized, as with the following function

The pthread_mutexattr_t *attr argument allows us to specify the behavior that we want the mutex to have. Passing NULL gives us the default behavior (similar to the case with pthread_create and pthread_attr_t).

Another interesting operation that can be used on mutexes is

Unlike pthread_mutex_lock which will cause the calling thread to block, this function will return immediately if the mutex cannot be acquired.

Mutexes can be destroyed (freed) with

Condition variables are synchronization mechanisms that allow blocked threads to be notified when a certain condition occurs.

In pthreads, condition variables are represented by the pthread_cond_t data type.

To wait on a condition variable, we can call

When a thread enters this function, it immediately releases the mutex and places itself on the wait queue associated with the condition variable. When the thread is woken up, it will automatically reacquire the mutex before exiting the wait operation.

To signal or broadcast on a condition variable we call

pthread_cond_init takes some attributes that can further specify the behavior of the condition variable (much like we saw with pthread_create and pthread_mutex_init). As before, setting this value to NULL gives us the default behavior. 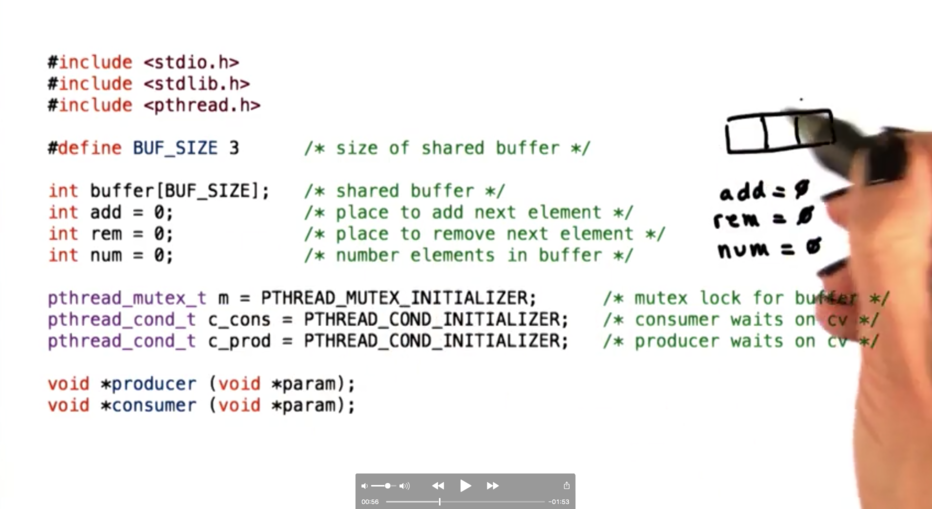 Our shared buffer is buffer. add and rem refer to the indices at which we add and remove elements, respectively, while num refers to the number of elements in the queue.

These shared variables are used in conjunction with our mutex m and our condition variables c_cons and c_prod which are all initialized here. 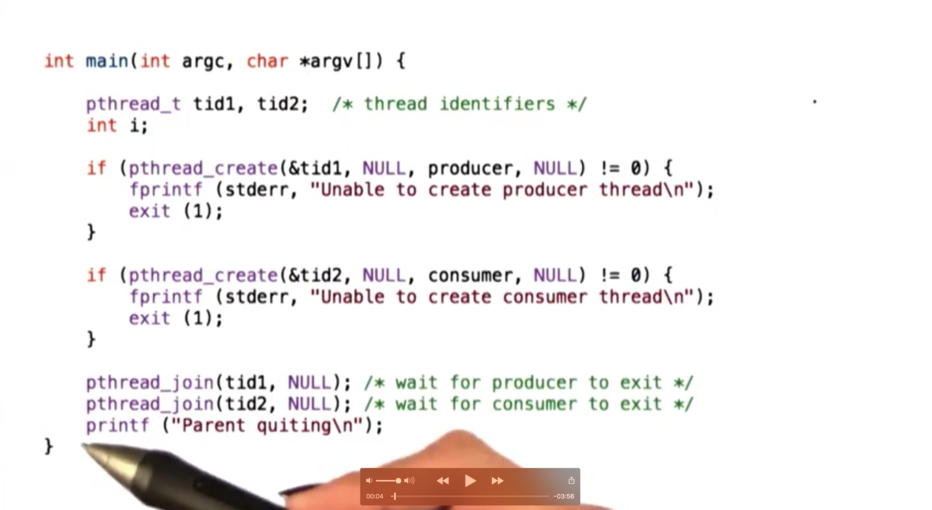 We use the default behavior for these threads (i.e. they are not detachable), so we must make sure to pthread_join them before main returns. 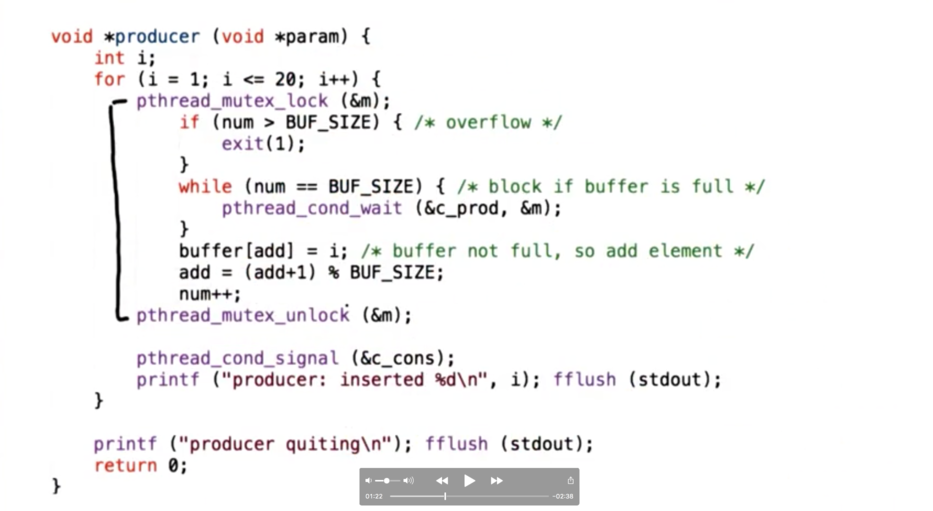 The producer loops twenty times, and tries to produce an element to the shared buffer on each iteration.

It tries to accomplish this by first acquiring m with pthread_mutex_lock. Once m is acquired, the producer will potentially wait on c_prod with pthread_cond_wait if the shared buffer is full (num == BUFSIZE). Otherwise, the producer will add its element to the buffer, and update the three shared variables to reflect this addition.

Once the producer unlocks the mutex, it signals on c_cons with pthread_cond_signal to let the consumers know that there is data to consume. 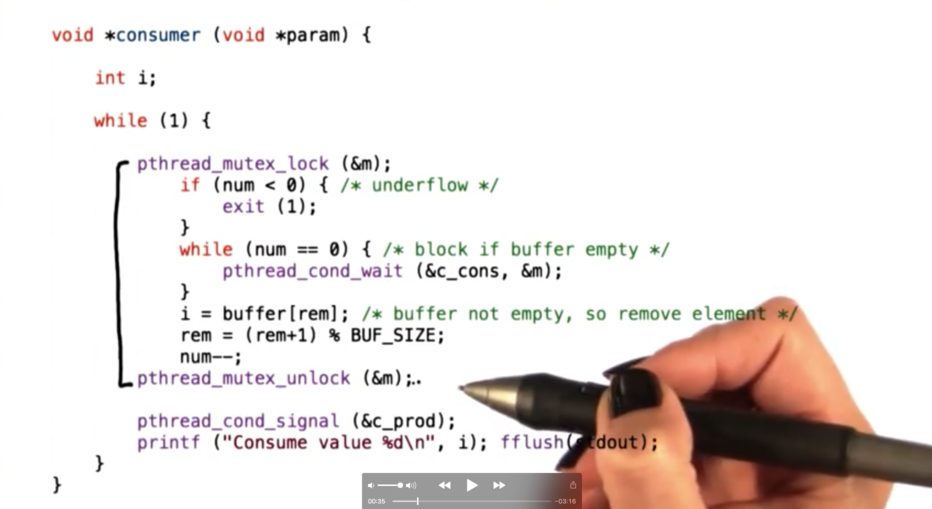 The consumer loops forever, continuously trying to remove elements from the shared buffer.

It tries to accomplish this by first acquiring m with pthread_mutex_lock. Once m is acquired, the consumer will potentially wait on c_cons with pthread_cond_wait if the shared buffer is empty (num == 0). Otherwise, the consumer will remove an element from the buffer, and update the three shared variables to reflect this removal.

Once the consumer unlocks the mutex, it signals on c_prod with pthread_cond_signal to let the producer know that there is space in the buffer to add more data.