What led us to SDN?

Diversity of equipment on the network

Computer networks have a wide range of equipment - from routers and switches to middleboxes such as firewalls, network address translators, server load balancers, and intrusion detection systems (IDSs). The network has to handle different software adhering to different protocols for each of these equipment. Even with a network management tool offering a central point of access, they still have to operate at a level of individual protocols, mechanisms and configuration interfaces, making network management very complex.

Equipment like routers and switches tend to run software which is closed and proprietary. This means that configuration interfaces vary between vendors. In fact, these interfaces could also differ between different products offered by the same vendor! This makes it harder for the network to manage all these devices centrally.

These characteristics of computer networks made them highly complex, slow to innovate, and drove up the costs of running a network.

SDN offers new ways to redesign networks to make them more manageable! It employs a simple idea - separation of tasks. We've seen that our code becomes more modular and easy to manage when we divide them into smaller functions with focused tasks. Similarly, SDN divides the network into two planes - control plane and data plane. It uses this separation to simplify management and speed up innovation!

A Brief History of SDN: The Milestones

In this section, we are providing an overview of the history of SDN, as a summary based on the paper "The Road to SDN: An Intellectual History of Programmable Networks" http://www.sigcomm.org/sites/default/files/ccr/papers/2014/April/0000000-0000012.pdf

The history of SDN can be divided into three phases:

Lets take a look at each phase.

This phase took place from the mid-1990s to the early 2000s. During this time, the internet takeoff resulted in an increase in the applications and appeal of the internet. Researchers were keen on testing new ideas to improve network services. However, this required standardization of new protocols by the IETF (Internet Engineering Task Force), which was a slow and frustrating process.

This tediousness led to the growth of active networks, which aimed at opening up network control. Active networking envisioned a programming interface (a network API) that exposed resources/network nodes and supported customization of functionalities for subsets of packets passing through the network nodes. This was the opposite of the popular belief in the internet community - the simplicity of the network core was important to the internet success!

In the early 1990s, the networking approach was primarily via IP or ATM (Asynchronous Transfer Mode). Active networking became one of the first ‘clean slate' approaches to network architecture.

There were two types of programming models in active networking. These models differ based on where the code to execute at the nodes was carried.

Although the capsule model was most closely related to active networking, both models have some effect on the current state of SDNs. By carrying the code in data packets, capsules brought a new data-plane functionality across networks. They also used caching to make code distribution more efficient. Programmable routers made decision making a job for the network operator.

The pushes that encouraged active networking were:

The use pulls for active networking were:

In addition to these use cases, active networks made three major contributions related to SDN:

One of the biggest downfalls for active networking was that it was too ambitious! Since it required end users to write Java code, it was too far removed from the reality at that time, and hence was not trusted to be safe. Since active networking was more involved in redesigning the architecture of networks, not as much emphasis was given to performance and security – which users were more concerned about. However, it is worthwhile to note that some efforts did aim to build high-performance active routers, and there were a few notable projects that did address the security of networks. Since there were no specific short-term problems that active networks solved, it was harder for them to see widespread deployment. The next efforts had a more focused scope and distinguished between control and data planes. This difference made it easier to focus on innovation in a specific plane and inflict widespread change.

This phase lasted from around 2001 to 2007. During this time, there was a steady increase in traffic volumes and thus, network reliability, predictability and performance became more important. Network operators were looking for better network-management functions such as control over paths to deliver traffic (traffic engineering). Researchers started exploring short-term approaches that were deployable using existing protocols. They identified the challenge in network management lay in the way existing routers and switches tightly integrated the control and data planes. Once this was identified, efforts to separate the two began.

The technology pushes that encouraged control and data plane separation were:

This phase was different from active networking in several ways:

Some use pulls for the separation of control and data planes were:

Most work during this phase tried to manage routing within a single ISP, but there were some proposals about ways to enable flexible route control across many administrative domains.

The attempt to separate the control and data planes resulted in a couple of concepts which were used in further SDN design:

Initially, many people thought separating the control and data planes was a bad idea, since there was no clear idea as to how these networks would operate if a controller failed. There was also some skepticism about moving away from a simple network where all have a common view of the network state to one where the router only had a local view of the outcome of route-selection. However, this concept of separation of planes helped researchers think clearly about distributed state management. Several projects exploring clean-slate architecture commenced and laid the foundation for OpenFlow API.

This phase took place from around 2007 to 2010. OpenFlow was born out of the interest in the idea of network experimentation at a scale (by researchers and funding agencies). It was able to balance the vision of fully programmable networks and the practicality of ensuring real world deployment. OpenFlow built on the existing hardware and enabled more functions than earlier route controllers. Although this dependency on hardware limited its flexibility, it enabled immediate deployment.

The basic working of an OpenFlow switch is as follows. Each switch contains a table of packet-handling rules. Each rule has a pattern, list of actions, set of counters and a priority. When an OpenFlow switch receives a packet, it determines the highest priority matching rule, performs the action associated with it and increments the counter.

OpenFlow was adopted in the industry, unlike its predecessors. This could be due to:

Some key effects that OpenFlow had were:

Why Separate the Data Plane from the Control Plane?

Why separate the control from the data plane?

We know that SDN differentiates from traditional approaches by separating the control and data planes.

The reasons we separate the two are:

Separation of the control and data planes supports the independent evolution and development of both. Thus, the software aspect of the network can evolve independent of the hardware aspect. Since both control and forwarding behavior are separate, this enables us to use higher-level software programs for control. This makes it easier to debug and check the network's behavior.

In addition, this separation leads to opportunities in different areas.

Two important functions of the network layer are:

Forwarding is one of the most common, yet important functions of the network layer. When a router receives a packet at its input link, it must determine which output link that packet should be sent through. This process is called forwarding. It could also entail blocking a packet from exiting the router, if it is suspected to have been sent by a malicious router. It could also duplicate the packet and send it along multiple output links. Since forwarding is a local function for routers, it usually takes place in nanoseconds and is implemented in the hardware itself. Forwarding is a function of the data plane. 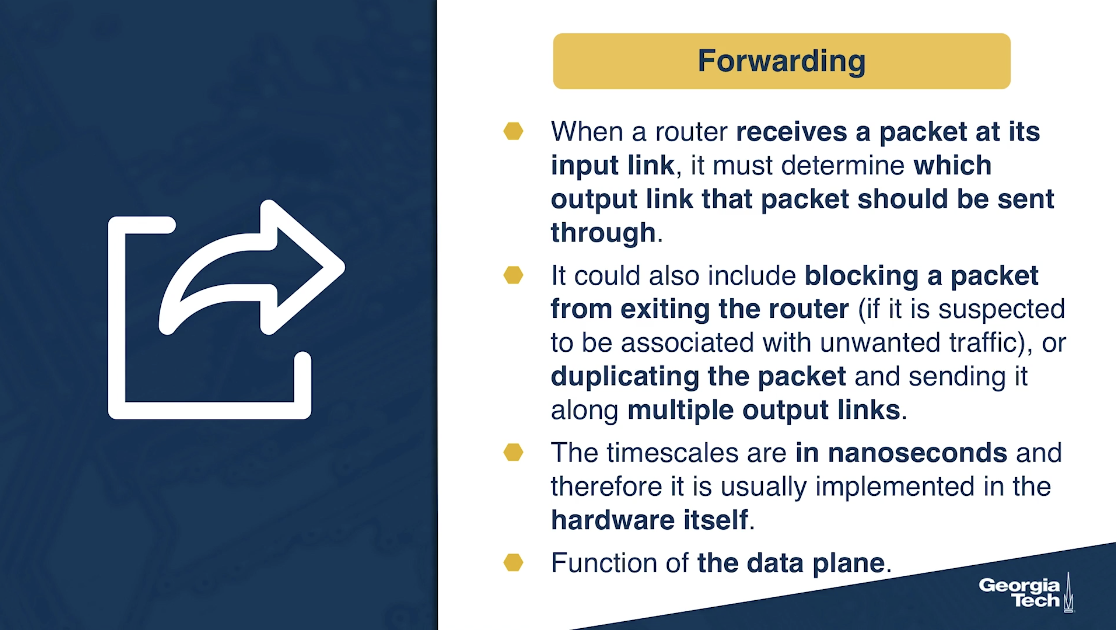 So, a router looks at the header of an incoming packet and consults the forwarding table, to determine the outgoing link to send the packet to. 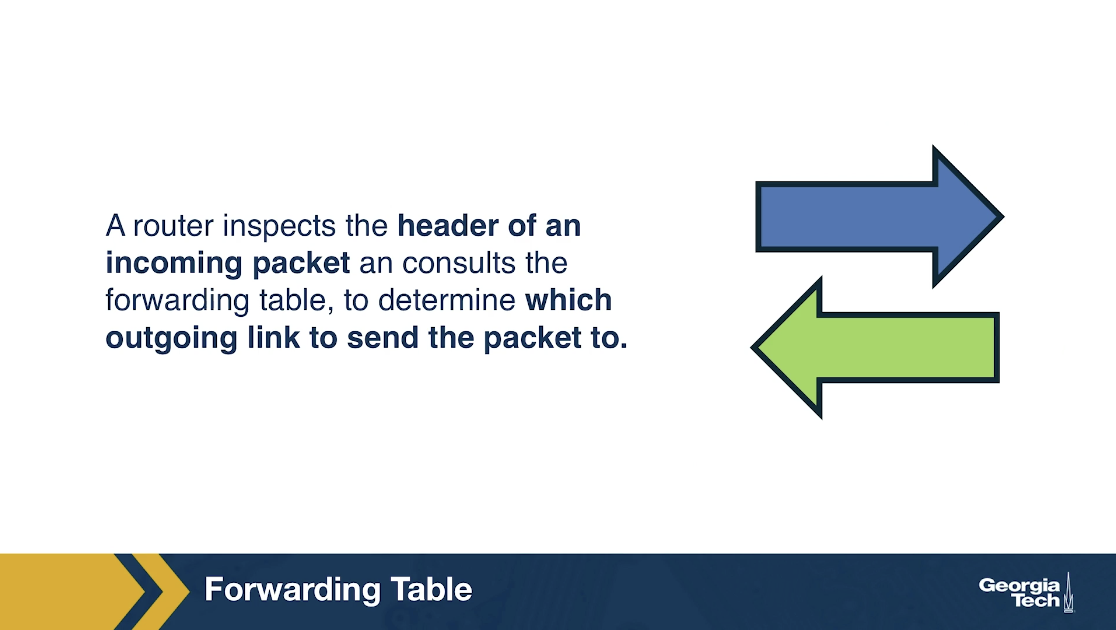 Routing involves determining the path from the sender to the receiver across the network. Routers rely on routing algorithms for this purpose. It is an end-to-end process for networks. It usually takes place in seconds and is implemented in the software. Routing is a function of the control plane. 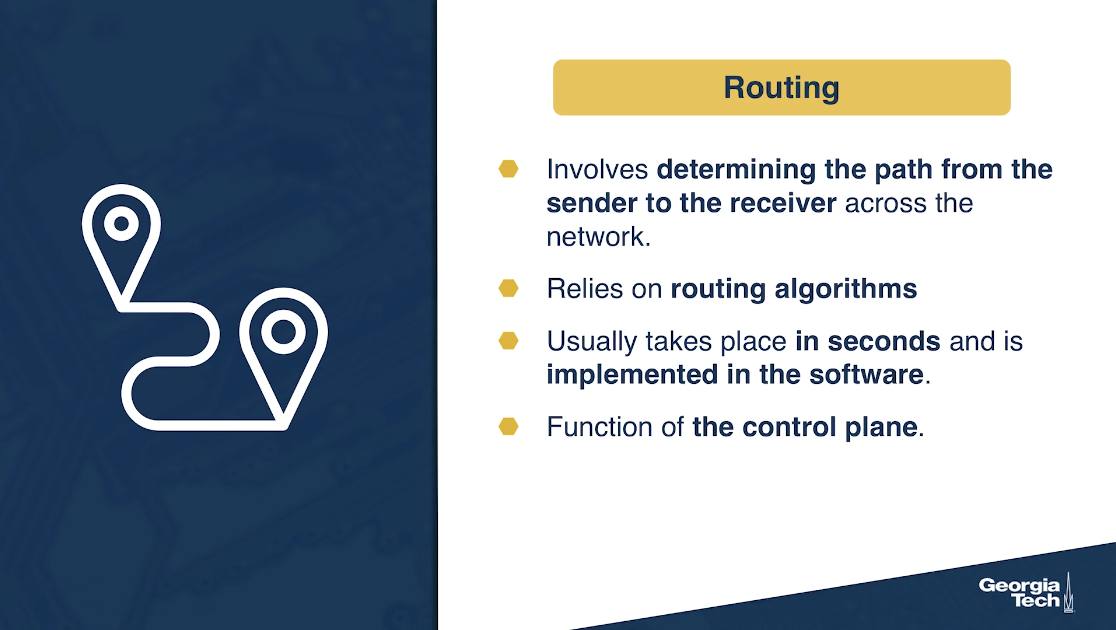 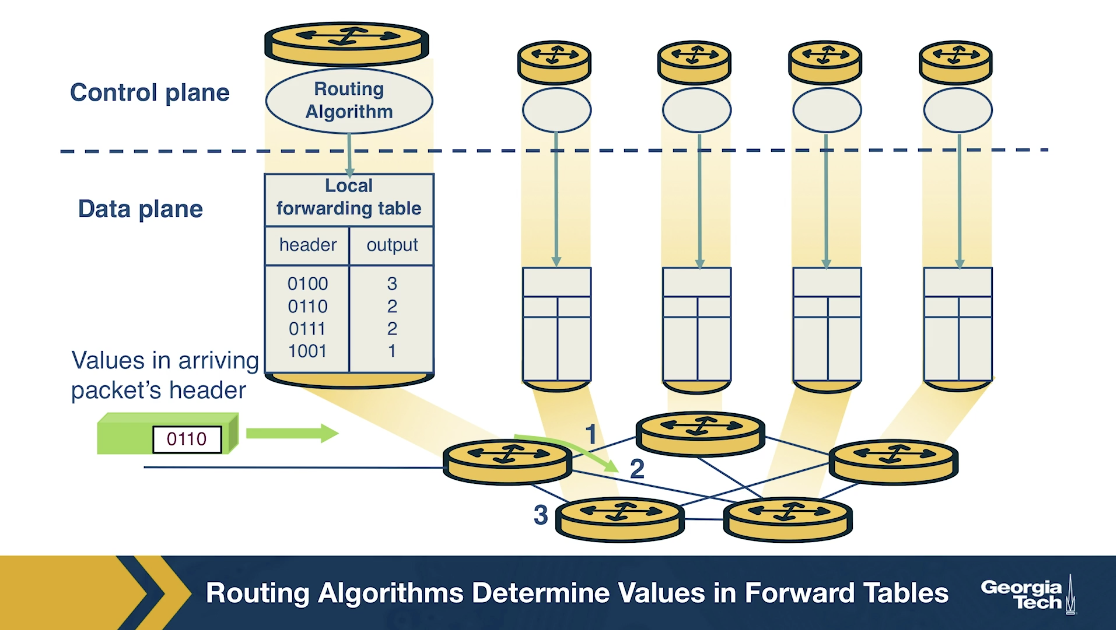 In the SDN approach, on the other hand, there is a remote controller that computes and distributes the forwarding tables to be used by every router. This controller is physically separate from the router. It could be located in some remote data center, managed by the ISP or some other third party.

These software implementations are also increasingly open and publicly available, which speeds up innovation in the field. 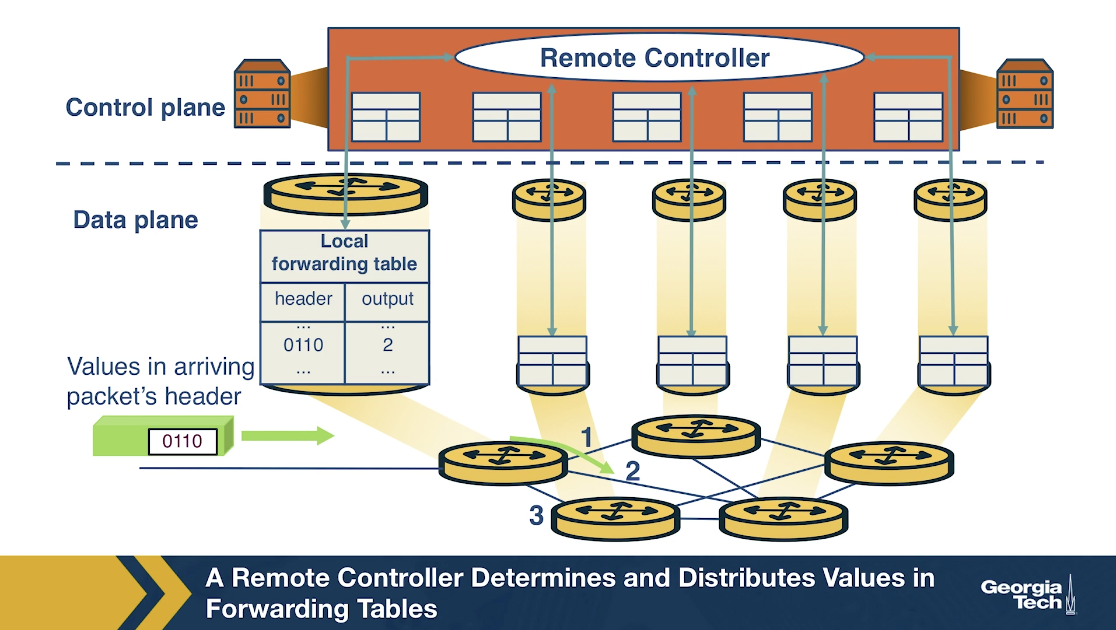 In the figure below we see the main components of an SDN network: 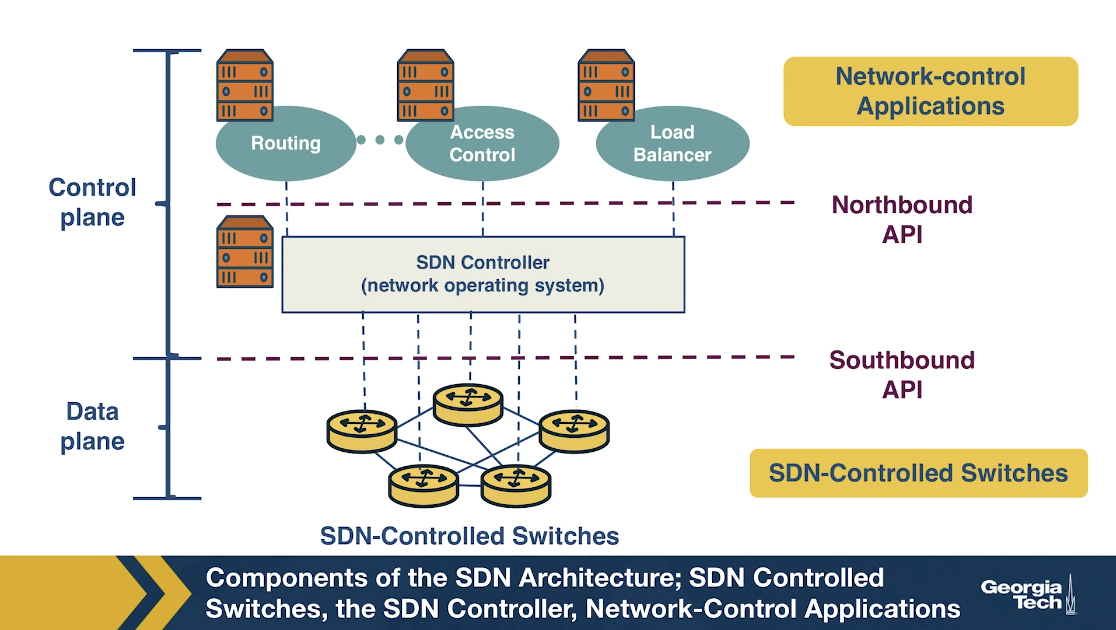 The SDN-controlled network elements, sometimes called the infrastructure layer, is responsible for the forwarding of traffic in a network based on the rules computed by the SDN control plane.

The SDN controller is a logically centralized entity that acts as an interface between the network elements and the network-control applications.

The network-control applications are programs that manage the underlying network by collecting information about the network elements with the help of SDN controller.

Let us now take a look at the four defining features in an SDN architecture: 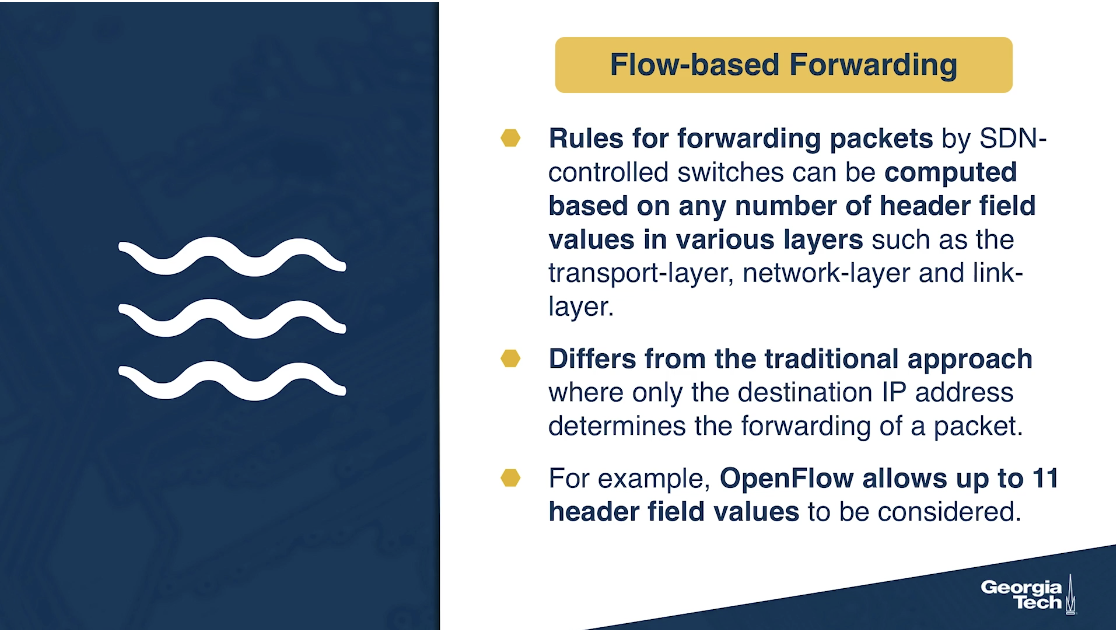 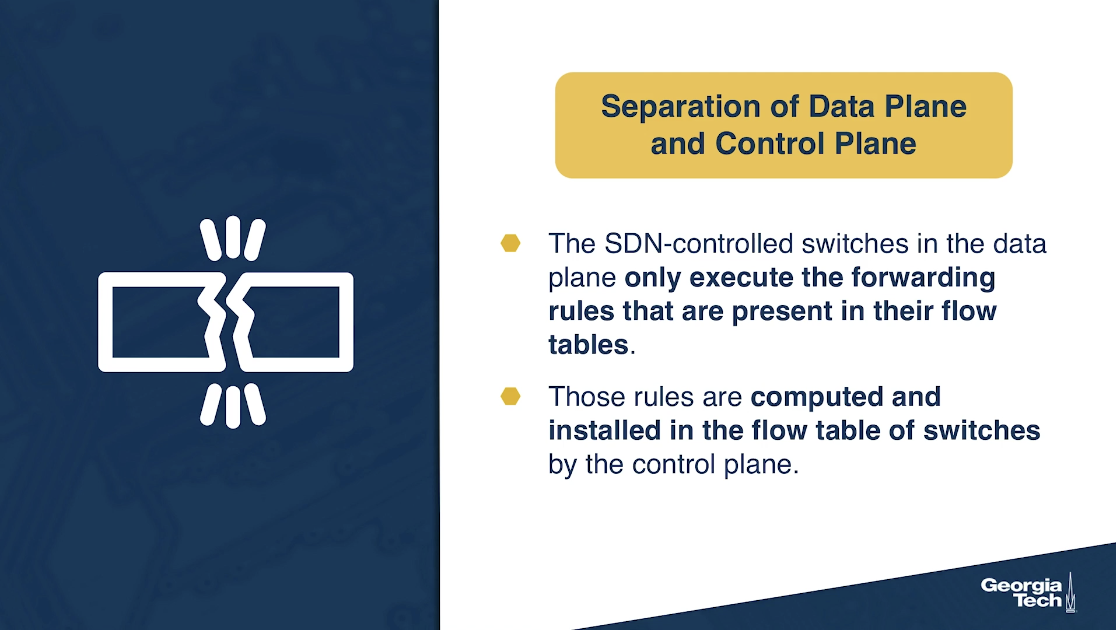 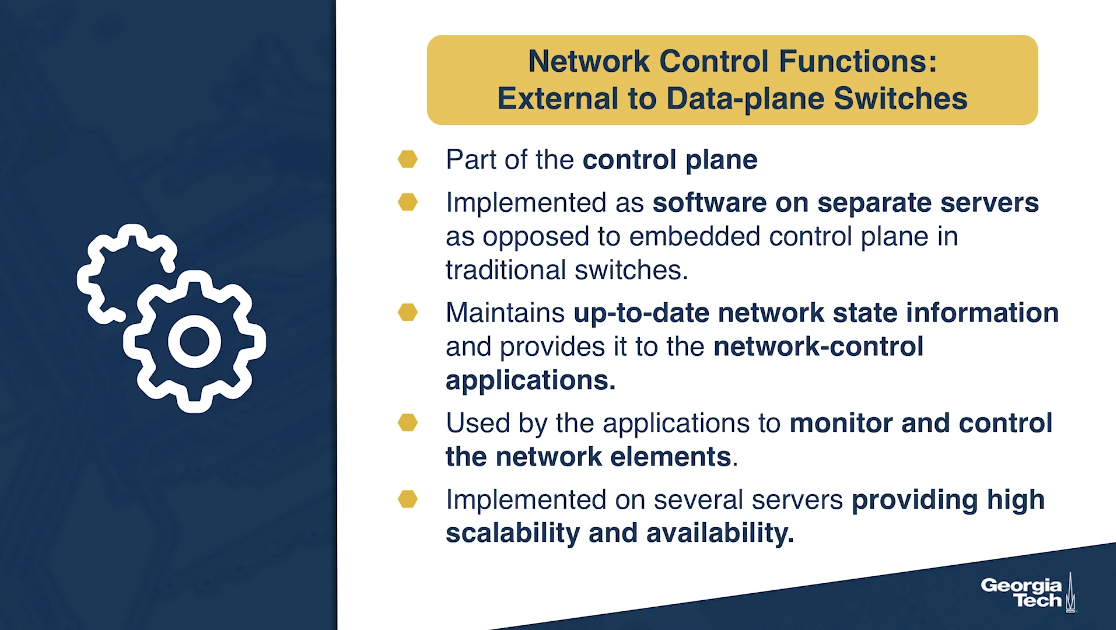 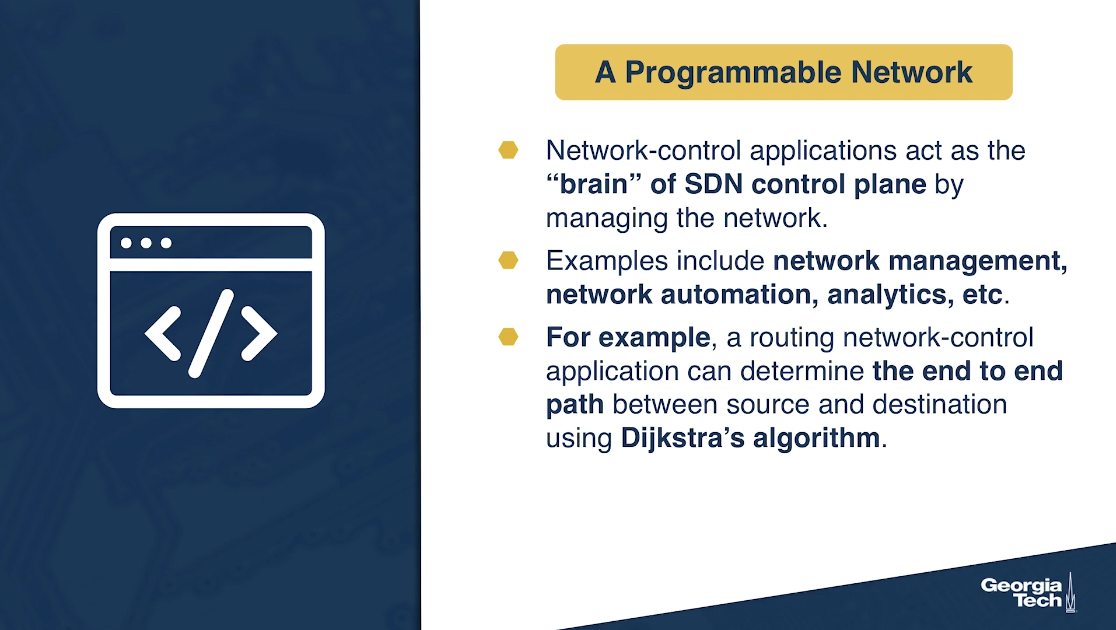 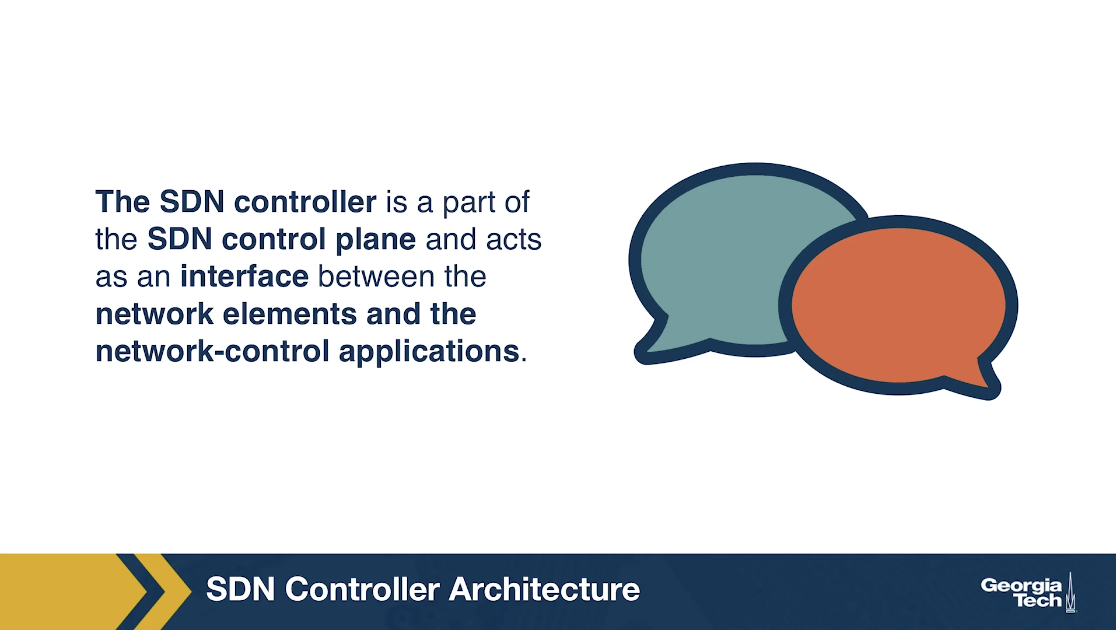 An SDN controller can be broadly split into three layers: 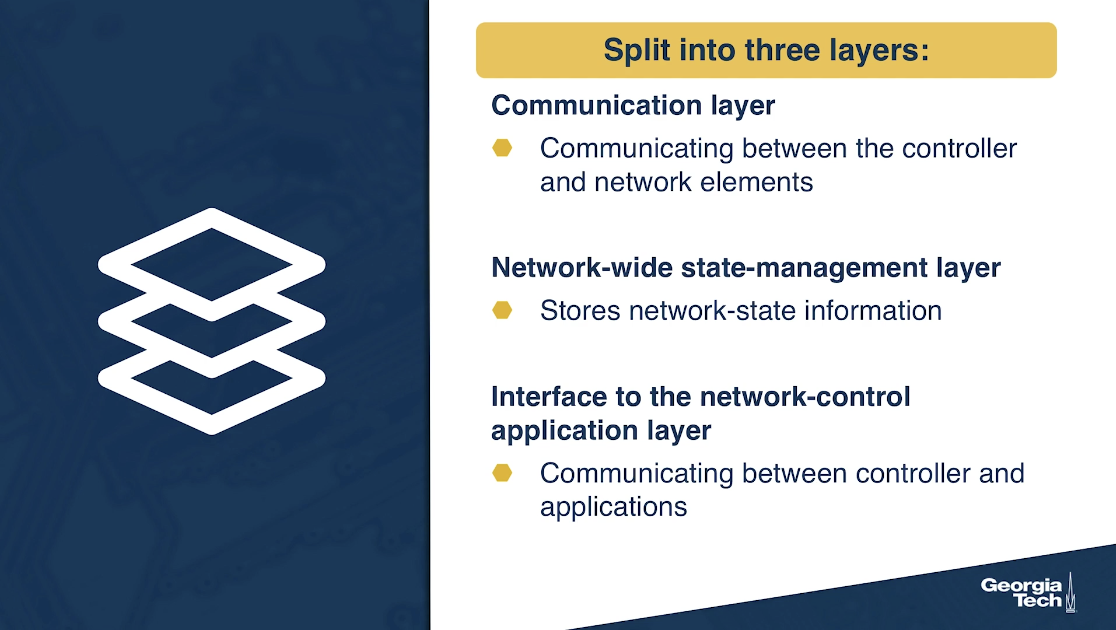 Let's look at each layer in detail starting from the bottom: 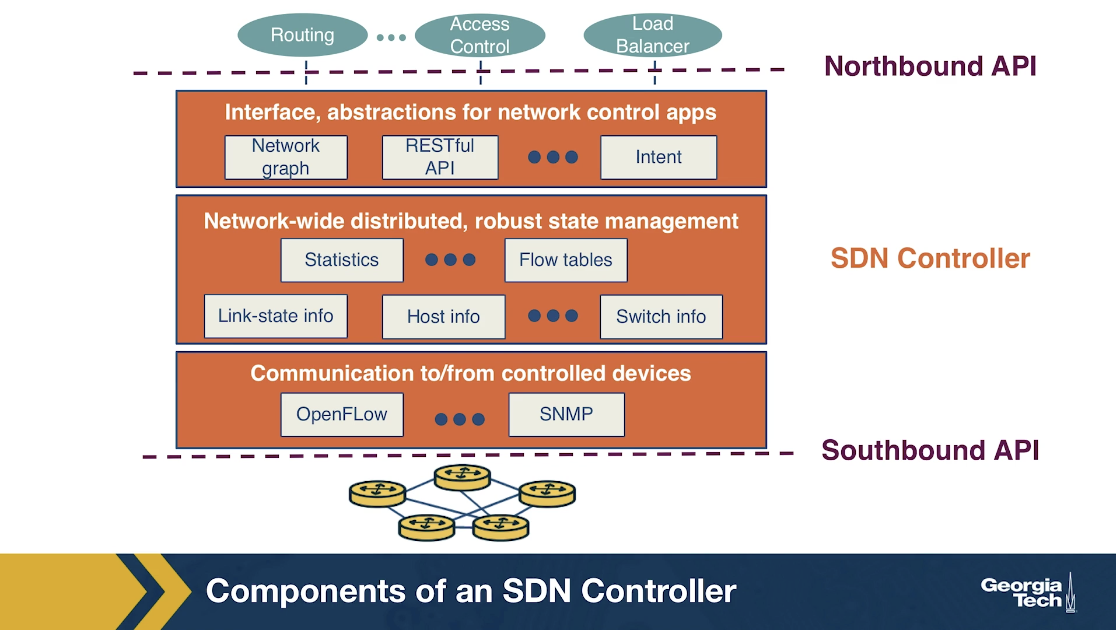 Interface to the network-control application layer 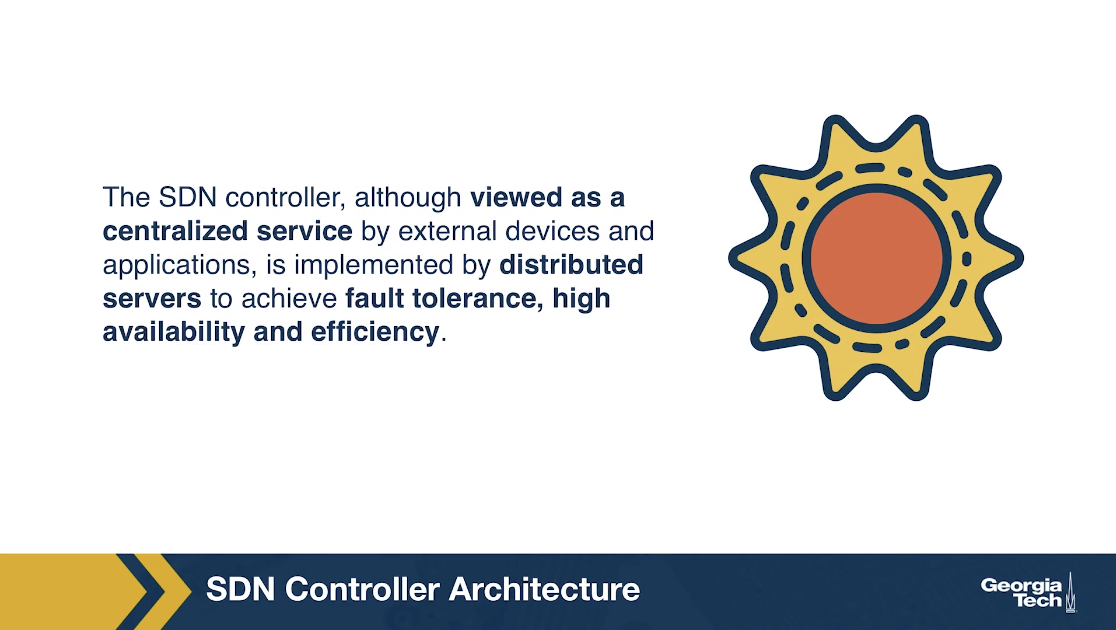 The SDN controller, although viewed as a monolithic service by external devices and applications, is implemented by distributed servers to achieve fault tolerance, high availability and efficiency. Despite the issues of synchronization across servers, many modern controllers such as OpenDayLight and ONOS have solved it and prefer distributed controllers to provide highly scalable services.

In the previous topics we looked at the SDN Controller architecture. We talked about the Southbound and Northbound interfaces, and how the SDN controller uses them to interact with other components. 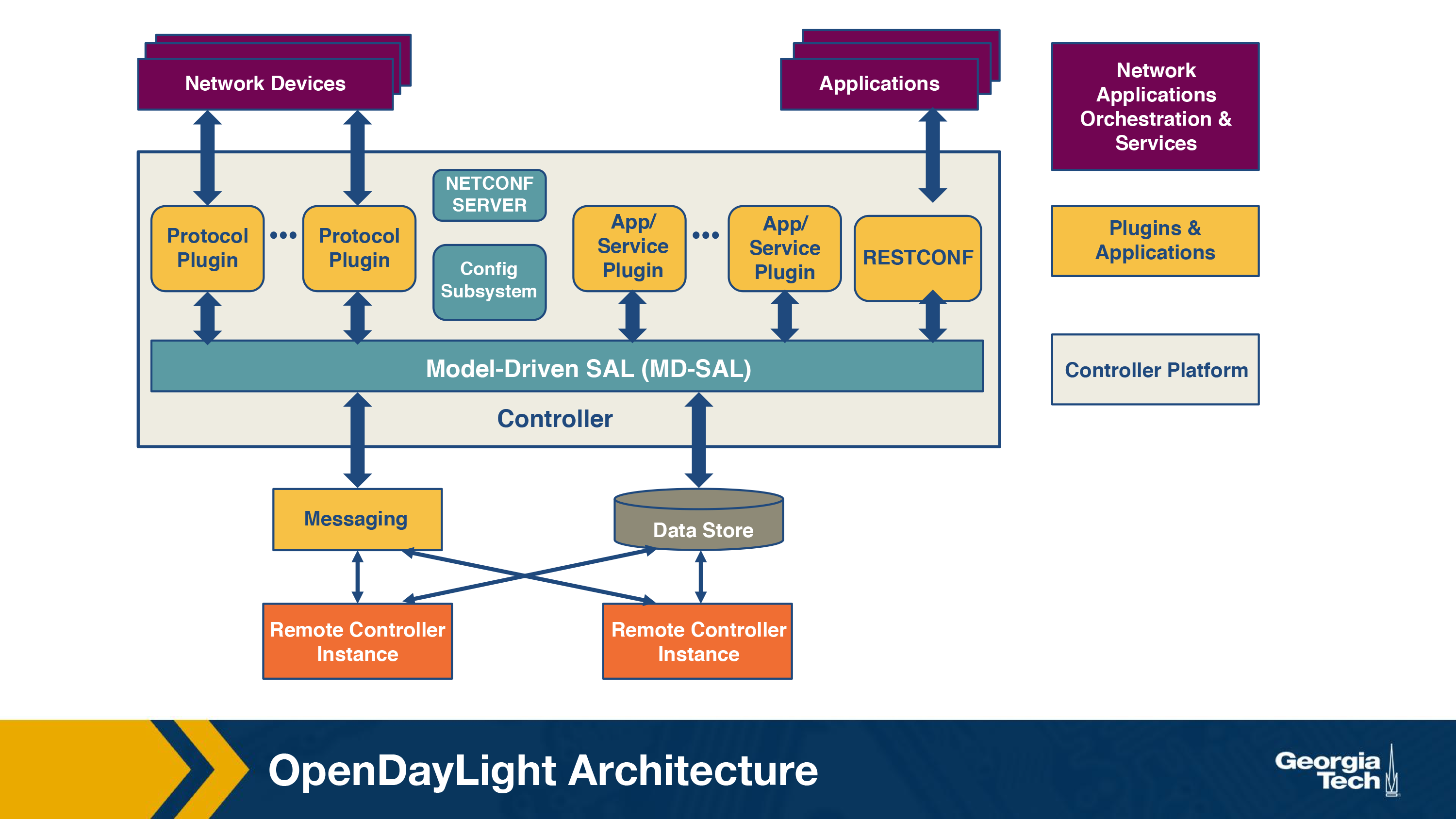 In this topic, we will first take a look at the OpenDaylight controller architecture: