A hash function can be applied to a block of data of any size and produces a fixed-size output, typically in the range of 128-512 bits. Given a message m, computing the hash H(m) should be very easy.

These properties make hash functions practical for security applications. We need our hash functions to be able to handle arbitrary input and compute their output efficiently.

The following properties are required for hash functions to be secure.

Given H(m), it should be computationally infeasible to find m. We call such a non-invertible function a one-way function.

Given input data m1, it should be computationally infeasible to find another input value m2​=m1, such that H(m1)=H(m2). This property of hash functions is the weak collision-resistant property.

Even though the hash code is encrypted, the attacker only needs to find a message that reproduces the unencrypted hash code, since the encryption of two identical hash codes produces the same result.

As a result, the receiver is unable to tell that an attacker has modified the message because the modified message has the same hash code as the original message, and thus the same encrypted hash code. 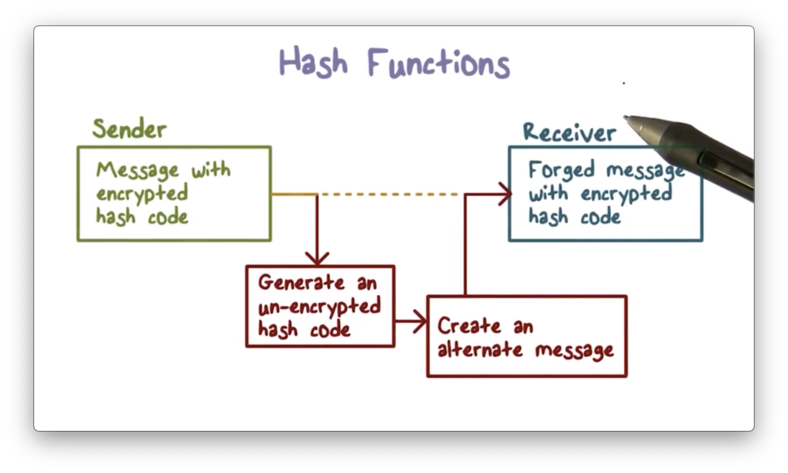 The strong collision-resistant property states that it should be computationally infeasible to find two different inputs m1​=m2, such that H(m1)=H(m2).

Suppose that Bob does some work for Alice, and he wants her to pay him later. He can draft an IOU message and ask Alice to digitally sign it as a way of agreeing to pay it. To sign the IOU, Alice first hashes it and then signs the hash using her private key. Later, Bob can present this IOU message, along with the signature, to Alice or Alice's bank to retrieve the payment. 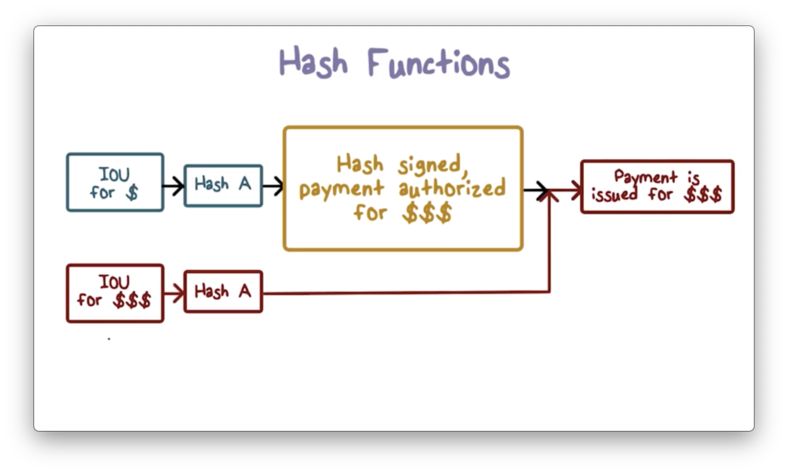 To understand the constraints and potential weaknesses of hash functions, we need to understand two concepts: the pigeonhole principle, and the birthday paradox.

If we add another pigeon, then there must be one hole occupied by two pigeons. Generally, if n>m, then at least one hole must have more than one pigeon.

How many people do you need in a room before you have a greater than 50% chance that two of them have the same birthday?

Obviously, with 366 people, there is a 100% chance that two people have the same birthday.

If we only want a good chance, say 50%, that two people share a birthday, how do we calculate how many people we need in the room?

We can reframe the problem to ask instead: how many people do we need in a room before the probability p that everyone has a unique birthday drops below 50%?

When we place the first person f in the room, p=1. Since there are no other people in the room, f is guaranteed to have a unique birthday.

When we place the second person s in the room, there are only 364 unique days left, since f has already taken one day. The probability that s doesn't share f's birthday is 364/365, and thus the overall probability p drops from 1 to 364/365.

The third person, t, is in a similar situation. Since two people precede them, there are only 363 available birthdays left. As a result, p drops to 364/365∗363/365. We multiply the probabilities because we need to make sure that s doesn't violate the uniqueness constraint and t doesn't either. Technically, this is a conditional probability.

Generally, for k possible birthdays and n individuals in the room, we can calculate the p as:

Analytically, the probability of repetition given k possible events and n selected events, is approximately n2/2k. This probability is 0.5 when n=k​. For example, if k=365, then k​=19 approximately, which is close to the correct answer of 23.

Back to Hash Functions

Once we understand the pigeonhole principle and the birthday paradox, we see that some of the properties of hash functions seem to contradict each other.

Remember, a hash function produces a fixed-size output from an input of arbitrary size. Since there are an infinite number of arbitrarily-sized inputs, and a finite number of fixed-size hash codes, many inputs can be mapped to the same output hash value. In other words, we have many more pigeons than pigeonholes.

This setup seems to violate the property of collision resistance. However, the collision resistance properties only speak to computational infeasibility, not mathematical impossibility. From a security perspective, a collision that is infeasible to find is as good as one that doesn't exist.

The larger the number of output hash values, the harder it is to find a collision. We can reduce the probability of a collision by increasing the length of the hash code.

To reduce the chance of collision, we need to use hash functions that produce longer hash values, but how many bits is enough?

Suppose a hash function produces hash codes that are l bits long. As a result, this function can produce 2l possible hash values. According to the birthday paradox, we have a 50% chance of finding a collision after processing 2l​=2l/2 messages.

Therefore, if l=64, then there are 264 hash values, and an attacker only needs to search 232 messages to find a collision. This search is entirely feasible with modern computing power. In practice, hash values are at least 128 bits long. 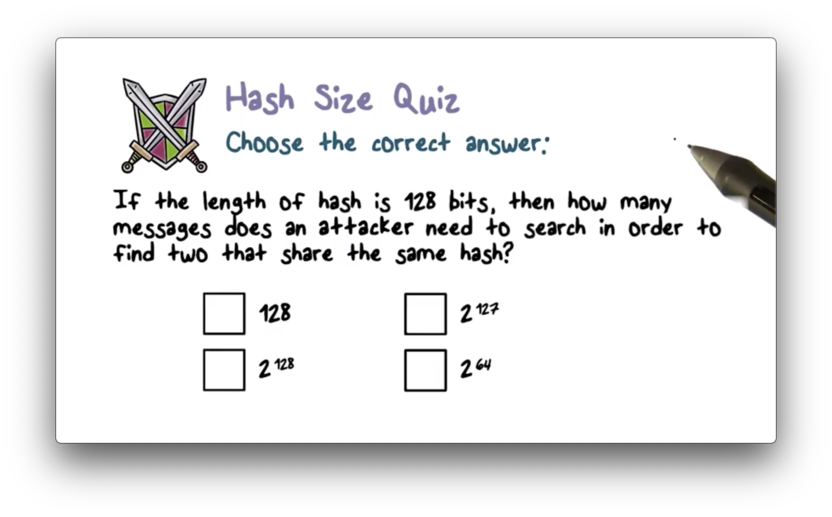 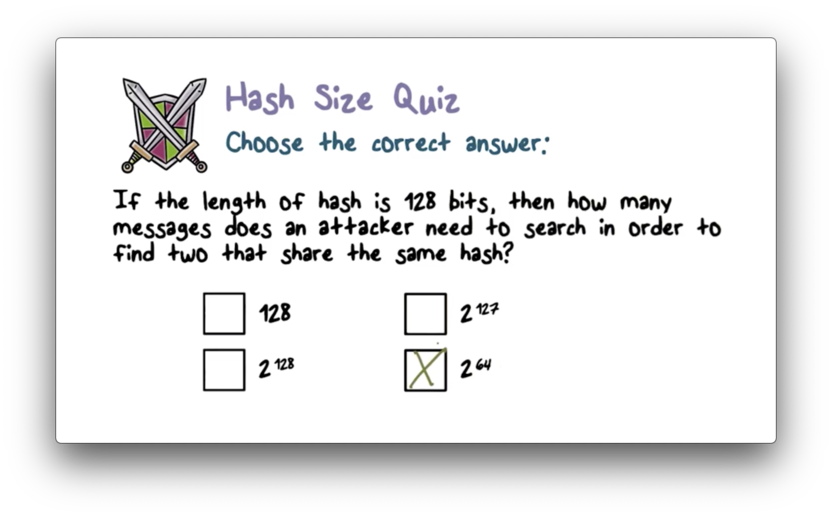 The original secure hash algorithm is SHA-1, which produces a hash value of 160 bits. The subsequent SHA-2 family of algorithms, which operate similarly to SHA-1, produce hashes of 256-, 384-, and 512-bits long. 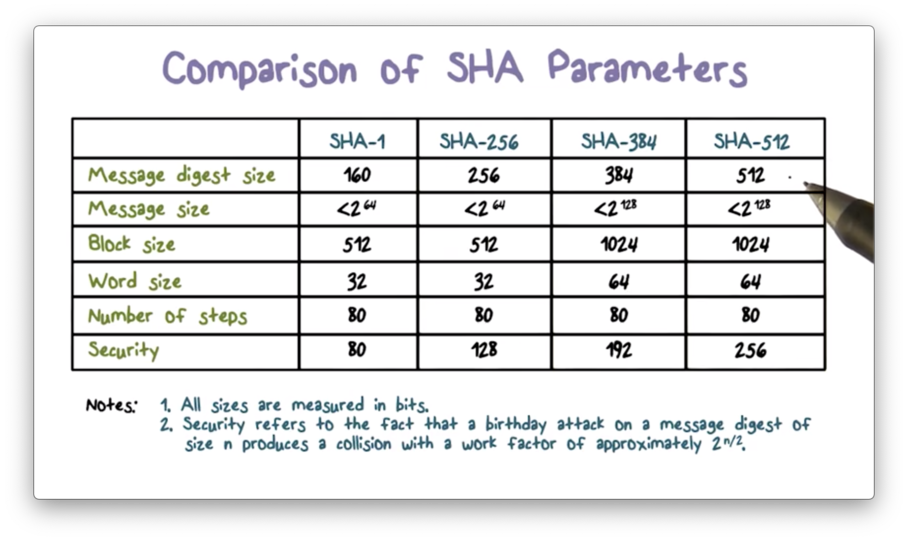 Message digest size refers to the length of the hash value. As we know, SHA-1 produces 160-bit hashes, and SHA-512 produces 512-bit hashes.

Message size is the size limit on the input. These limits do not have any effect in practice, because most, if not all, messages are much smaller. For example, SHA-1 caps the message size at 2^64 bits. Given that one terabyte is 2^43, SHA-1 can hash a message that is over two million terabytes long.

The following figure shows the overall processing of a message to produce a hash value. 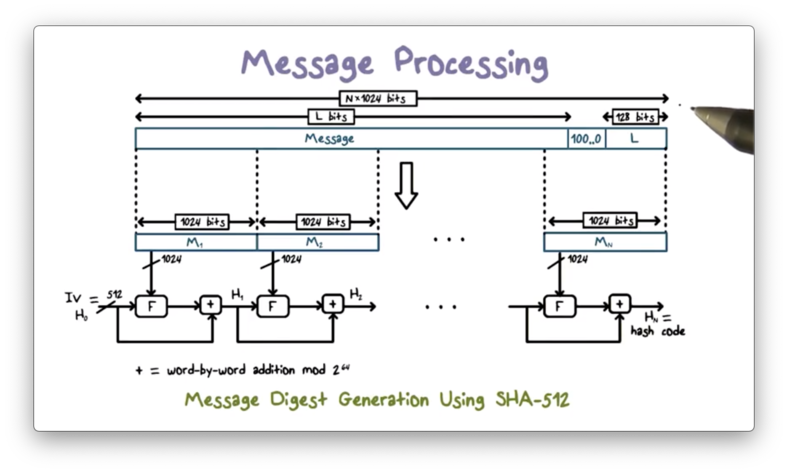 Before any processing can start, we must pad the message to a multiple of 1024 because the hash function processes the message in 1024-bit blocks. First, we store the length of the original message in the final 128 bits of the last block. Next, we fill in the space between the end of the original message and the last 128 bits with 1 followed by as many 0s as necessary.

For the first message block, the input includes an initialization vector (IV), a 512-bit value hardcoded in the algorithm.

The following figure shows the processing of a single message block. 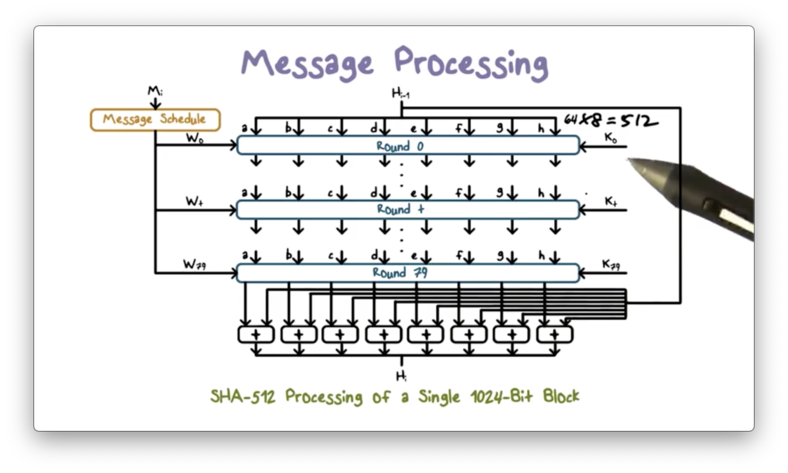 Processing a single block involves 80 rounds of operations that operate on both the current message block m and the output of processing the previous block.

The inputs to each round include the result from the previous round, some constant k, and some words w derived from m. k provides randomized values to eliminate any regularities in m.

The operations at each round include circular shifts and primitive boolean functions based on AND, OR, NOT, and XOR.

There have been several proposals to incorporate a secret key into an existing hash function. HMAC has received the most support thus far and has been adopted for use in other protocols such as IPSec and TLS. 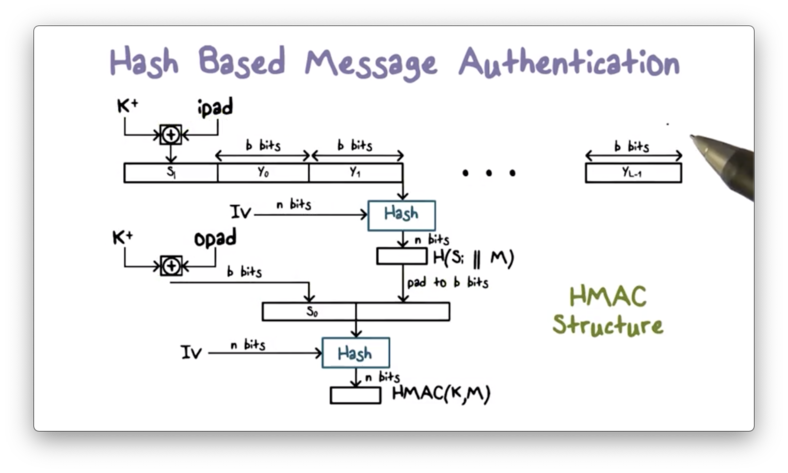 First, k is padded to b bits, which is accomplished by appending zeroes to k. The padded key is then XORed with ipad, a constant designed to eliminate any regularities in the key.

The result is a b-bit value s1. s1 is prepended to m, and then the combination s1+m is hashed using H to produce an n-bit hash value. For example, if the hash function is SHA-512, then n=512.

Next, the n-bit hash value is padded to b bits. The padded key is then XORed with opad, another constant designed to eliminate regularities in the key. The result is a b-bit value s0.

The padded hash h is then appended to s0, and the entire message s0+h is hashed. The n-bit result is the output of the HMAC procedure.

Furthermore, compared with a cryptographic hash function, it is much harder to launch a successful collision attack on HMAC because HMAC uses a secret key.

For example, suppose the attacker obtains the HMAC of message m1 and wants to find another message m2 such that HMAC(m2)=HMAC(m1) .

Without the secret key, there is no way the attacker can compute the correct HMAC value for m2. Thus, the attacker can't determine whether m1 and m2 have collision in HMAC.

In summary, because of the use of the secret key, HMAC is much more secure than a cryptographic hash function alone. 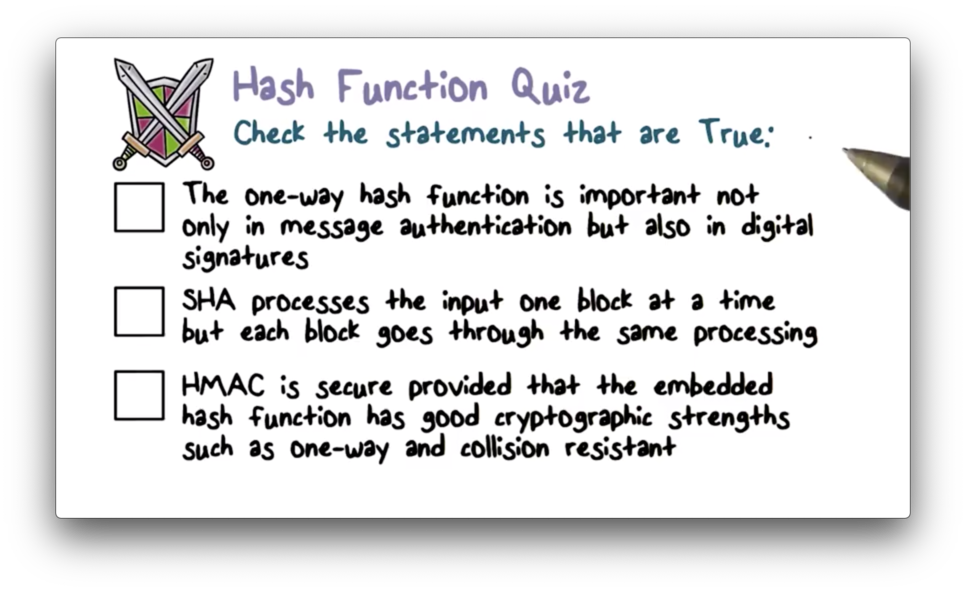 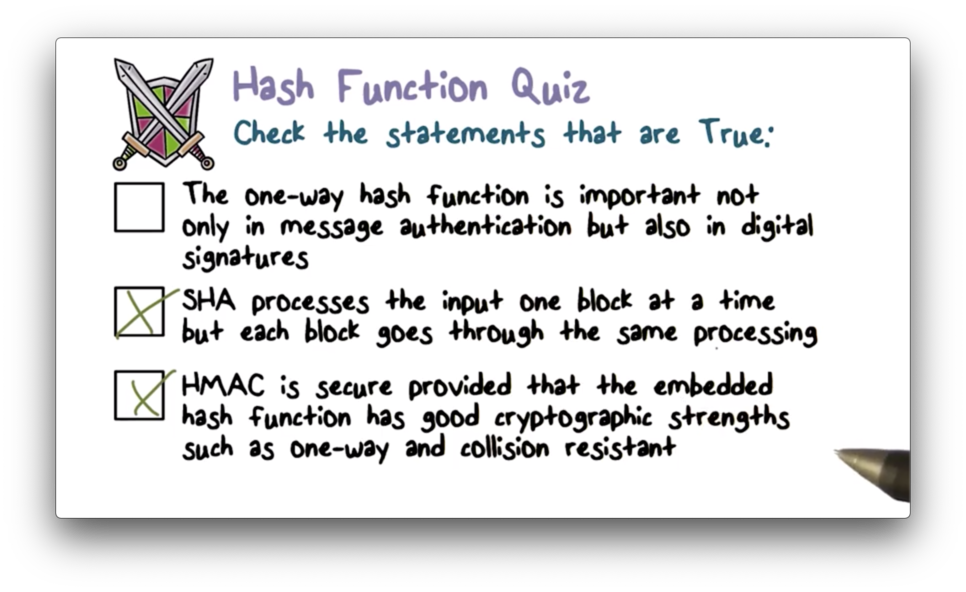